The Forgotten Man Behind Our National Anthem

Sponsored by Tydings & Rosenberg
O, Say Can You See?
Please join the Center for a Healthy Maryland for the Fifth Annual Hunt Lecture on Wednesday, June 25, 2014. This year’s speaker is Fort McHenry Ranger Paul Plamann who portrays MedChi Founder, William Beanes, M.D.
Dr. Beanes is the forgotten man behind our National Anthem, which celebrates its 200th anniversary in September. Dr. Beanes, a country physician in Southern Maryland, was taken captive by the British Army and Francis Scott Key was dispatched to negotiate for his release. While doing so, the Battle of Baltimore began, and Fort McHenry was bombed for more than 25 hours. When the smoke cleared, Key and Beanes could see the massive flag flying over Fort McHenry, and knew that the Fort had not fallen and Baltimore was safe. Francis Scott Key was moved to write the verses which became our national anthem – the Star-Spangled Banner.
Ranger Plamann has portrayed Dr. Beanes for more than 25 years and knows the story of Dr. Beanes’ early life on his family’s estate in Upper Marlborough, Prince George’s County, his role in the founding of MedChi in 1799, and his role in the War of 1812. 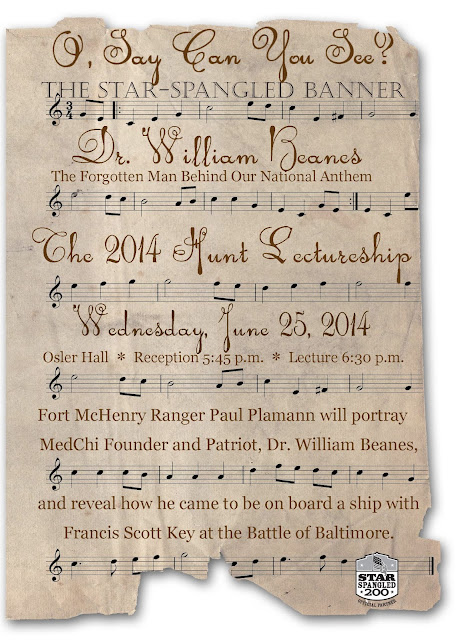