A Cache of Letters from H.L. Mencken to Max Brödel

Honestly, I never know what I will find in the 55 boxes (plus 23 more), and last week, I came across a plain brown envelope with "H.L. Mencken: Photocopies of Letters to Max Brödel" written on it. I wrote about Max Brödel here not only because we have a number of his original works, but because he was the first non-physician member to be honored with a membership to the Faculty.

One of Brödel's closest friends in Baltimore was H.L. Mencken, known as the Sage of Baltimore. They shared a deep interest in music, Germany (where Brödel was born), and drinking. 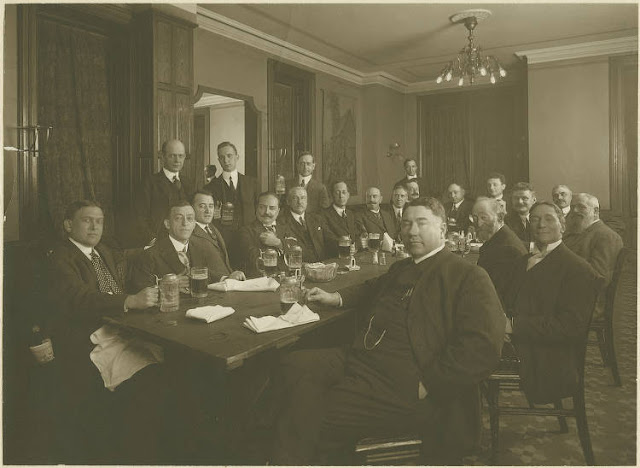 Together, they founded the "Saturday Night Club" an informal group of doctors, lawyers, teachers, musicians, artists, writers and businessmen who were interested in friendship, music, conversation and good food and good beer.

The 90 letters we have appear to begin in September of 1912 and continue until 1944, several years after Brödel's death, when the letters were to Mrs. Brödel.

Some of the letters are quite funny, but as years move on, they become very personal and poignant. Mencken talks about meeting on Saturday nights, making beer, good food, travel, spending summers at Brödel's "camp" in very rural Ontario. He also talks about his and others' sicknesses (he was a noted hypochondriac), deaths among friends and family, the situation in Europe just before WWII, and much more.

As I read through the letters, some things and some people are easy to figure out, but other references are quite obscure. A link to all of the letters are at the bottom of this post.

The Carl referred to in this letter is one of MB's three children. 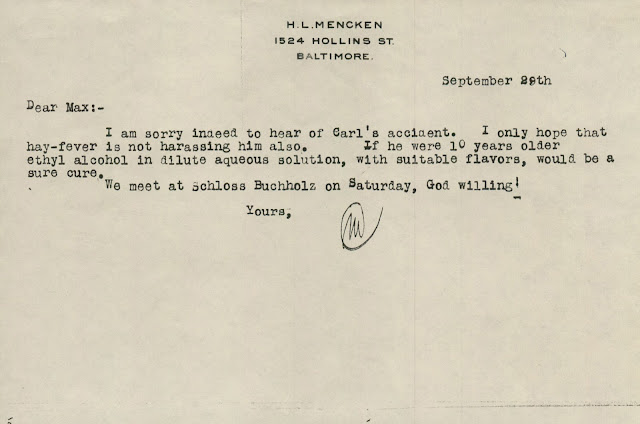 It's not unusual to see parts of some of the letters in German. 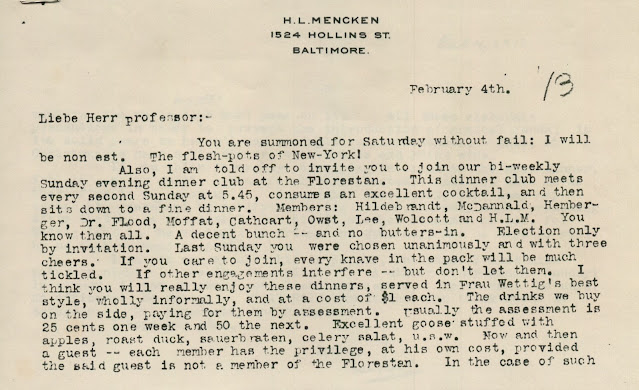 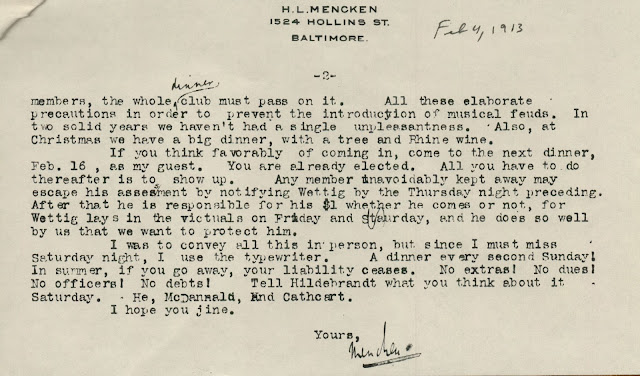 It is a huge compliment that HLM is asking for one of MB's drawings. 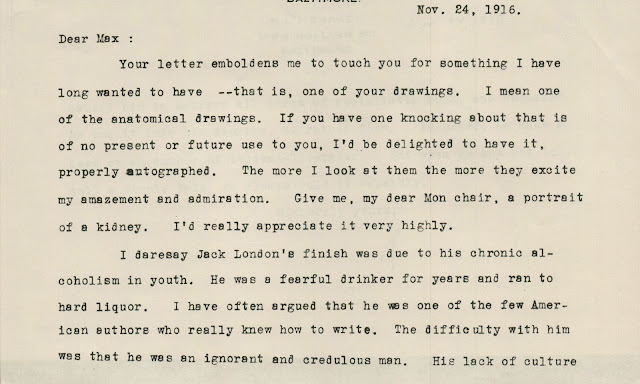 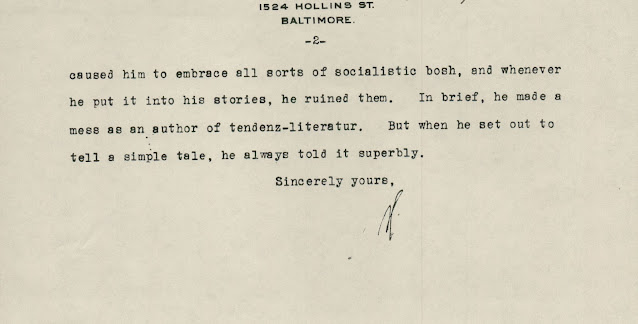 HLM is obviously very pleased with the drawing which he received within three days! 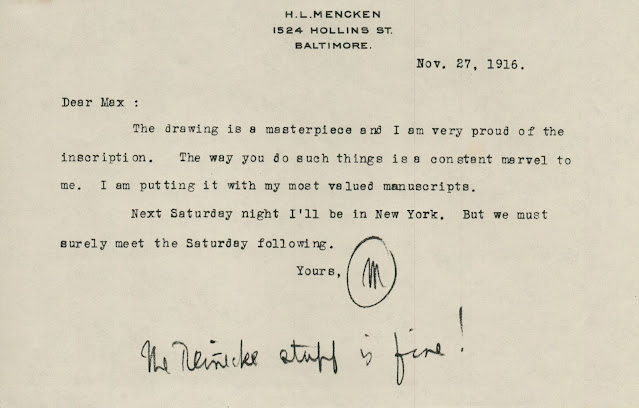 Very curious about the process for re-inoculating beer! 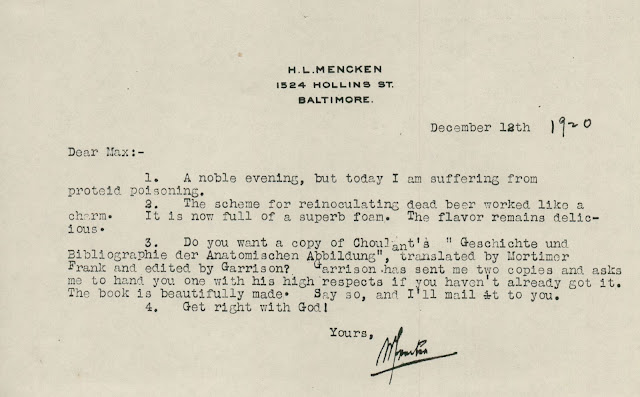 The Cullen in this letter is Dr. Thomas Cullen, a very close friend of MB's who was a part of the Saturday Night Club and also had a camp close to MB's in rural Ontario. Cullen wrote a brief biography of MB. 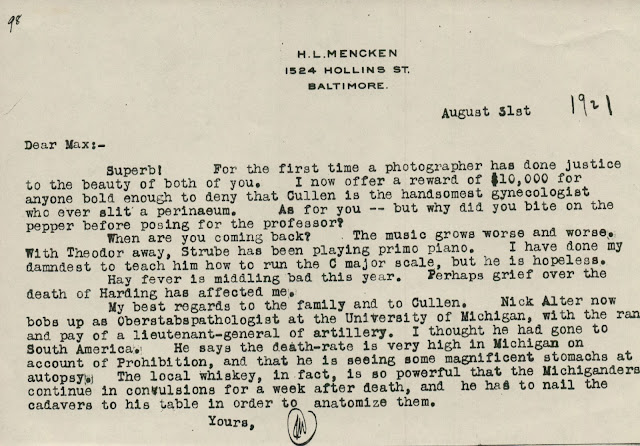 A gift of yeast from the Lowenbrau breweries was a treaure during Prohibition (1920-1933). 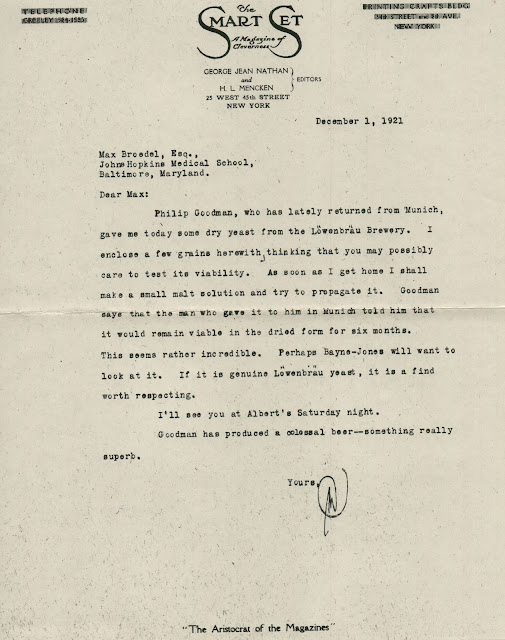 There are numerous mentions in these letters of Dr. Howard Kelly's religion, which he seemed to impose on people. He was one of a group of Canadian physicians at Hopkins, including Osler and Cullen. 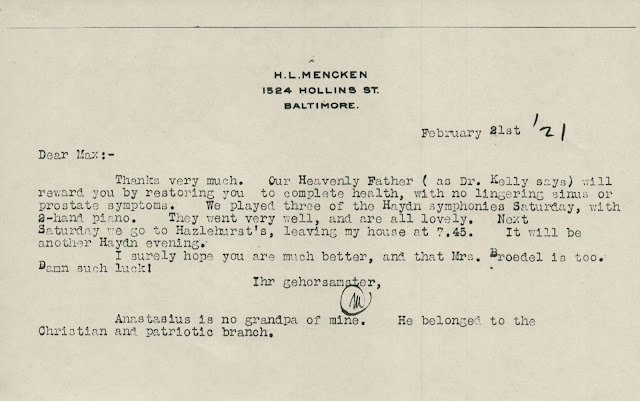 All of the letters have been scanned, and where applicable, I have added comments, mostly to explain who Mencken and Brödel were talking about, or to clarify a reference. You can access all of the letters HERE.

The System of Phrenology

We just received the final group of boxes from the Maryland Center for History & Culture and it's been fascinating going through them to see what treasures they hold.

One of the books I found was the illustrated 1834 "The System of Phrenology," a now-disputed science studying the conformation and contours of the skull with the belief that they indicate mental faculties and character. 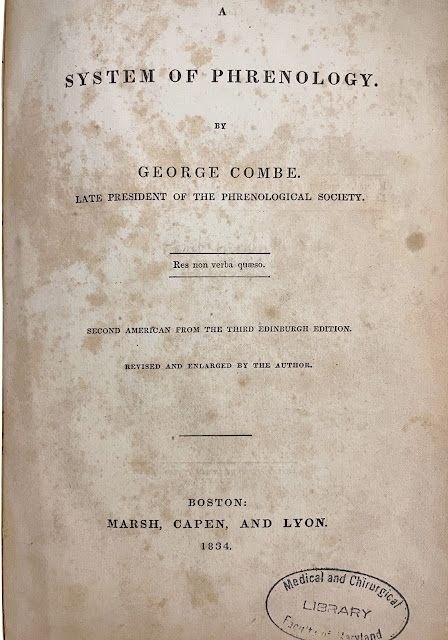 The book is several hundred pages long with intricate details of each of the attributes of every lump and bump on the skull.

Of course, the book is lavishly illustrated with detail engravings, which are fascinating. 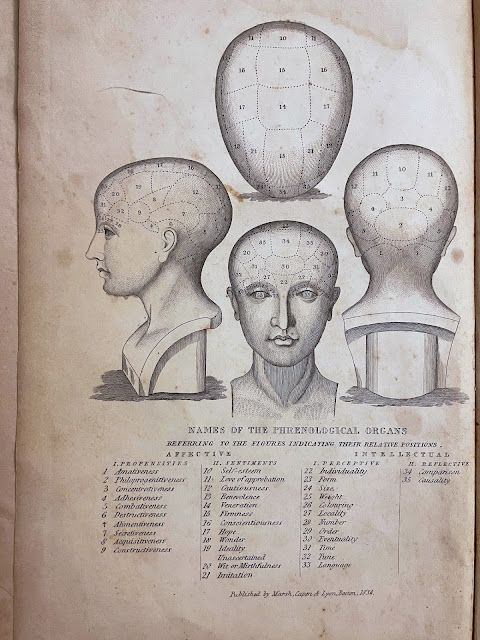 As I mention, there are 23 boxes in this group, and more than 300 items contained therein. So, this will be a great source of material for months to come.

January 21 marks the 224th anniversary of the founding of the Medical & Chirurgical Faculty of Maryland. For the next 10 months, we are going to be planning and preparing to celebrate our 225th anniversary in 2024. I wonder if any of the 101 founders ever could have imagined that the organization they worked so hard to create, would still be going strong in 2024.

Eugene Fontleroy Cordell, who wrote the 1899 Medical Annals of Maryland gave some thought to the first meeting, imagined the founders coming together for the first time. 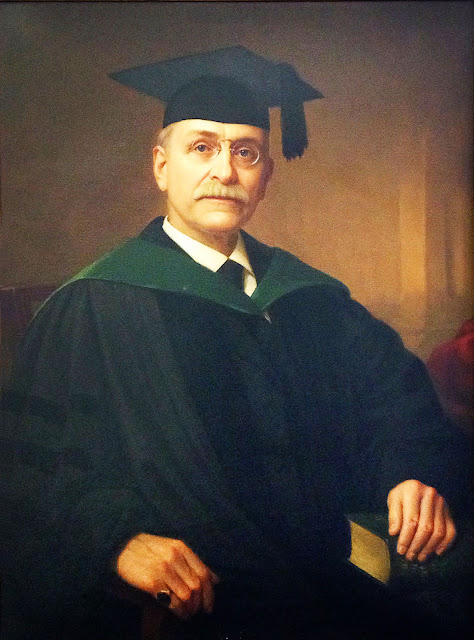 Here's what he had to say:

Considering the circumstances, it is altogether likely that the first meeting was held in one or another of the legislative halls at the capitol. It may have been in the historic Senate Chamber, where Congress had sat so recently and President Washington had resigned his commission and read his ever-memorable farewell address.

There we may fancy the founders preparing to sit in council, grave and reverend seigniors, deliberate in act and speech, still clad in the antique style, wig, cue, frilled shirt, high-necked coat with large brass buttons, knee breeches, stockings, shoe buckles and not least, gold-headed canes.

The first to enter, we will suppose, is the Baltimore delegation, arrived by the morning coach. George Buchanan, full of enterprise and action, precedes, followed by Henry Stevenson, prince of inoculators; Lyle Goodwin, the surgeon; the courtly and handsome Ashton Alexander, one of the youngest incorporators; and Arthur Pue and Daniel Moores, both graduates of Edinburgh.

Close behind them are the delegates from Baltimore County: Thomas Cradock and Philip Trapnall, both great in the counculs of the Church; John Cromwell, described as “a man of find constitution and exemplary habits,” and the others in the delegation.

Next come the Annapolitans, headed by the striking figure of Upton Scott, venerable with his seventy-seven years, precise, practical and business-like.

A delegation from the western part of the State has just arrived on horseback: the revered Philip Thomas of Frederick, a leader in his community; John Tyler, from the same place, whose fame in couching the cataract extended far and wide; Richard Pindell, of Revolutionary fame and later the physician of Henry Clay in Kentucky; Zadok Magruder, Jr., from the Quaker settlement in Montgomery; James Anderson, from the same county, whose practice is said to have covered 100 square miles; Zechariah Clagett of Pleasant Valley; George Lynn, of Cumberland, and other who joined on the way.

From the northeast came John Archer, of Harford, teacher, patriot, statesman, stern in look, the patriarch of American graduates, and Elijah Davis, who had been a prisoner on a Jersey prison ship during the Revolution.

From the Potomac region came Charles Worthington, of Georgetown, who was known in his day as the “Court Physician,” in his coach; Charles A. Beatty, the owner of the land on which Washington was built; and William Beanes, Jr., whose capture and imprisonment led to the writing of the Star Spangled Banner by his friend and rescuer [and nephew of Upton Scott], Francis Scott Key.

From the south came Gustavus Brown, of Port Tobacco, who was consultant with Drs. Craik and Dick in the last illness of George Washington; Daniel Jenifer, of the same place, and John Parnham, of Charles County, both surgeons in the Revolution.

An early arrival must have been Charles Alexander Warfield, of Anne Arundel, the impetuous leader of the patriots in the Peggy Stewart affair and the first to propose a separation from the mother country.

The Eastern Shore doubtless furnished its full quota, coming by sailboat across the Bay. From Easton came Tristram Thomas, distinguished by his extreme height, the tenuity of his frame and his gentle manner; the brusque Ennals Martin, and Perry Eccleston Noel, the Edinburgh graduate.

From Kent County came James Moat Anderson, a small spare figure with a limp, and dressed in the sober garb of the Methodists; Morgan Brown, Jr., who is described by his contemporaries as a man of remarkable judgement and acumen; and Edward Worrell, the medical teacher of that section.

From Queen Anne County came James Davidson, who hails from the Highlands of Scotland, and Robert Goldsborough of “Four-Square.”

Having alighted from coach and stage, having disembarked from vessels which lay moored in the Severn River, and having dismounted from their horses, we can imagine them assembling for the business before them. A short time is doubtless spent in greetings and congratulations upon the success of their long efforts to obtain legislation and the prospect of usefulness which now unfolds before them.

Cordell doesn't mention all 101 founders, but his descriptions of many of them give you a good idea of who they were and what they looked like.
Posted by Meg at Thursday, January 19, 2023 No comments:

As I was perusing a local auction site, I found an 1844 German anatomy book that looked like it would be selling for a song. I put in a bid and basically forgot about it until I got an invoice from the auction house. 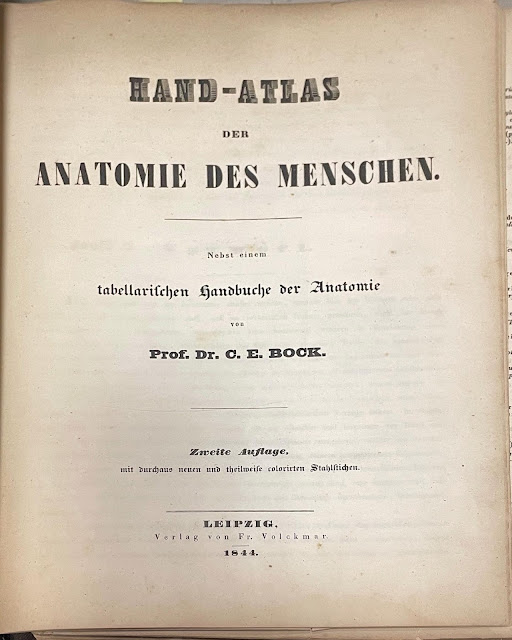 The book wasn't in great condition, sadly, but I thought that it might be good for framed prints. The prints are all engraved and some are hand-colored. 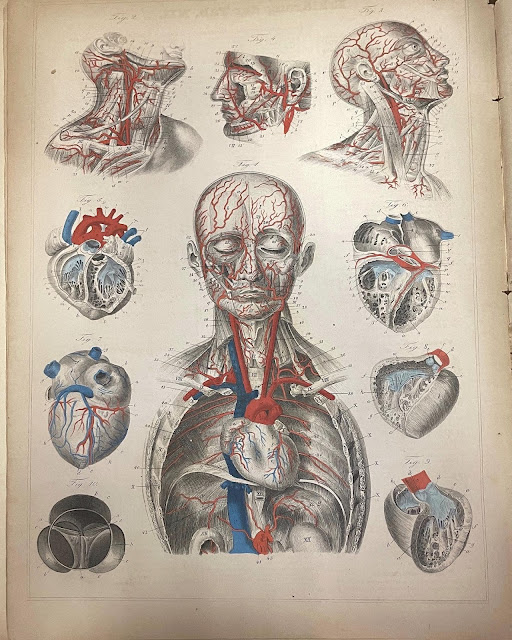 It turns out I have a small connection with this book, as it came from the extensive collection of Dr. Henry Wilson, a local ophthalmologist and noted bibliophile. 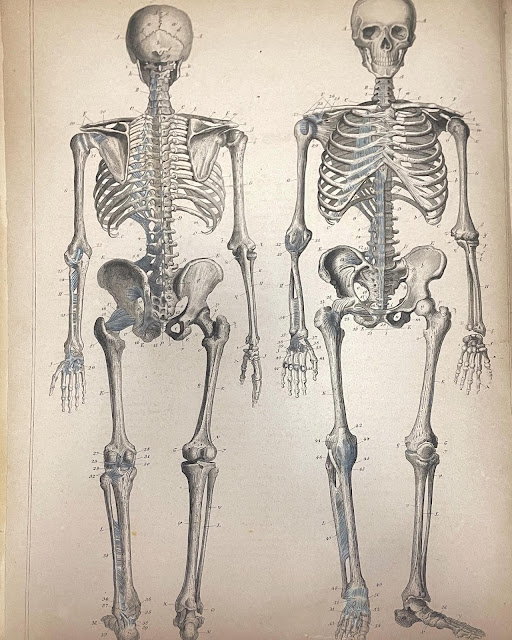 I grew up with his children and spent a lot of time at their house. Dr. Wilson and my father were both book collectors and had numerous conversations about their collections. 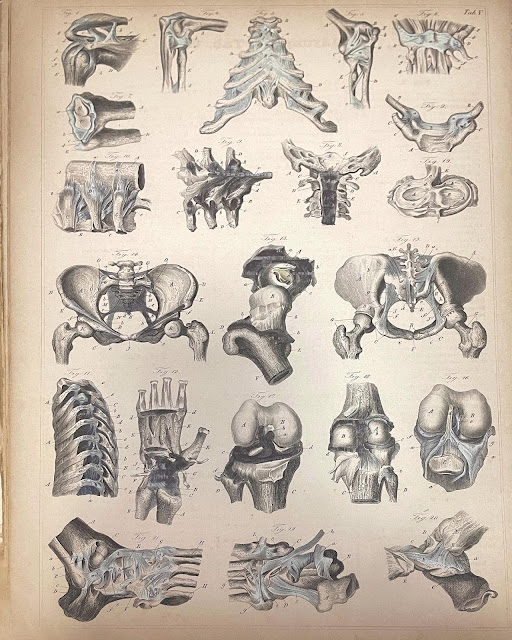 Because the book is written in German, I haven't been able to read through it, but the illustrations speak for themselves. 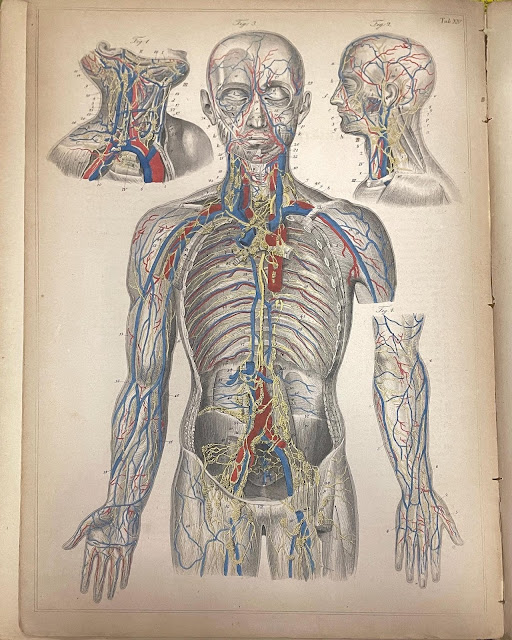 We are excited to add another book to our collection!

You might remember that we have a significant collection of bookplates here at MedChi. They were originally acquired when we established the Osler Testimonial Fund 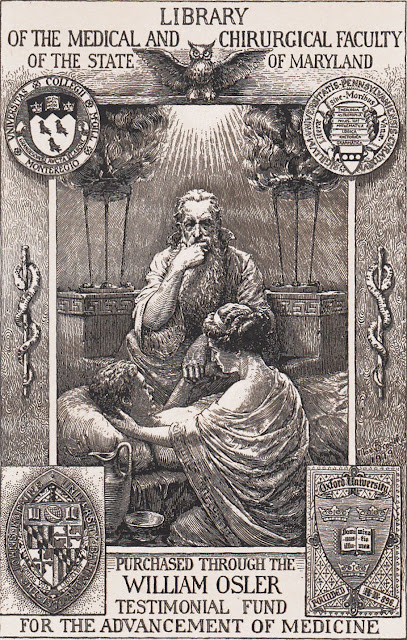 and physicians from across the United States requested copies of the OTF bookplate from Marcia. In return, she asked that they send her copies of their plates. You can see a number of posts about them here.

As I was going through the 55 boxes of ephemera and books which we recently acquired, I found an interesting plate. 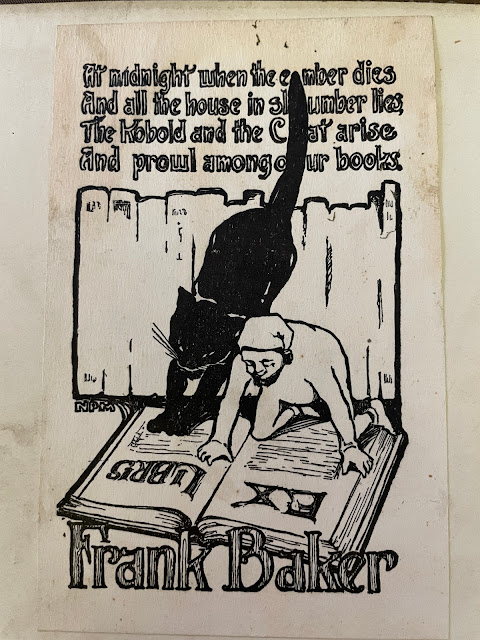 The verse talks about the Kobold and the Cat, and I had never heard of a Kobold before. I headed to the Google and found this: A kobold is a mythical sprite. Having spread into Europe with various spellings including "goblin" and "hobgoblin", and later taking root and stemming from Germanic mythology, the concept survived into modern times in German folklore.

I am not quite certain how you get goblin from kobold, but nevertheless, it makes the rhyme! I also need to hunt up Frank Baker and see who he is. Here's hoping that there are no kobold in your book collection! 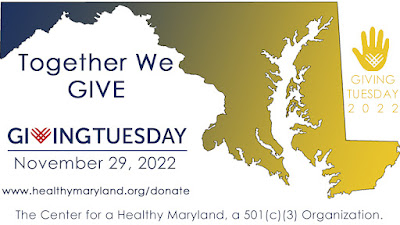 Our donors make our programs for MedChi members and the general public possible, and for this, I thank you. Due to the generosity of our donors, here are some of the Center’s accomplishments over the past year: 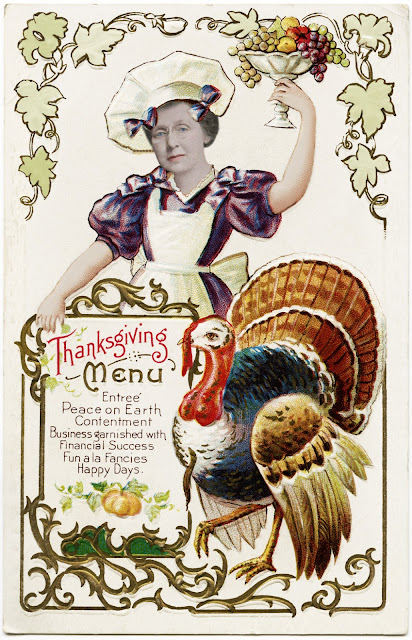 Email ThisBlogThis!Share to TwitterShare to FacebookShare to Pinterest
Labels: Marcia for the Holidays
Older Posts Home
Subscribe to: Posts (Atom)

© 2013-2022 MedChi, The Maryland State Medical Society and the Center for a Healthy Maryland

To view the 90 letters between the writer, critic and satirist, H.L. Mencken and the noted medical illustrator, please click here.

You can support the work of researching and preserving the MedChi Archives. Please click this link to make a gift. 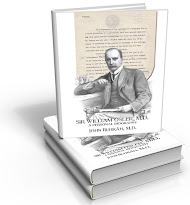 The 1934 biography of Sir William Osler, M.D. is now available through MedChi. After languishing in our archives for more than 80 years, this personal biography of Osler has been published for the first time ever. Click the image for more details.
Click here to order!