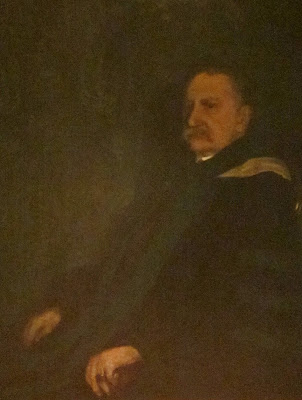 Randolph Winslow was born at Hertford, Perquimans County, North Carolina, October 23, 1852, son of Dr. Caleb and Jane (Parry) Winslow. His father was a physician of ability and standing.  He attended the local school, Hertford Academy, and later the Rugby Academy, in Baltimore. He then entered Haverford College, from which he was graduated in 1871, with the degree of A.B., the degree of A.M. being conferred in 1874.
Dr. Winslow entered the Medical Department of the University of Maryland in 1871, and was graduated in 1873, with the degree of M.D. In that same year, he took a special course in medicine at the University of Pennsylvania, and ten years later, in 1883, did postgraduate study at the renowned medical schools of Vienna, Austria.
Dr. Winslow held membership in the American Medical Association, Southern Surgical and Gynecological Association, and was a Vice President of the Medical and Chirurgical Faculty of Maryland. He was Chief Surgeon of the University of Maryland, and is one of the visiting surgeons of the Hebrew Hospital, Consulting Surgeon at the Hospital for Crippled Children of Baltimore, Consulting Surgeon to General and Marine Hospital, Crisfield, Maryland, and Surgeon to Union Hospital, Elkton, Maryland.
Dr. Winslow was one of the founders of the Women's Medical College in Baltimore.
On December 12, 1877, Dr. Winslow married Miss Rebecca Fayssoux Leiper, daughter of John Chew and Mary Fayssoux Leiper and they had thirteen children, twelve of whom survived.
Dr. Winslow was a member of the North Carolina Society of Baltimore, of which he has been president.

© 2013-2021 MedChi, The Maryland State Medical Society and the Center for a Healthy Maryland