As long-time MedChi member, Dr. Harry Knipp was doing a Covid clear-out, he discovered some old pictures of the University of Maryland. He was kind enough to let me share his thoughts and his photos. 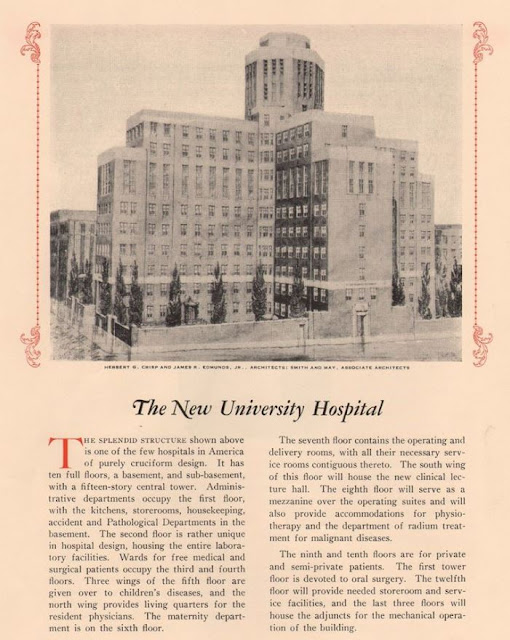 A page from a fundraising booklet for the brand new Art Deco 1934 University Hospital. The corner in the foreground is Redwood and Greene Streets. (Credit UMB Digital Archive) 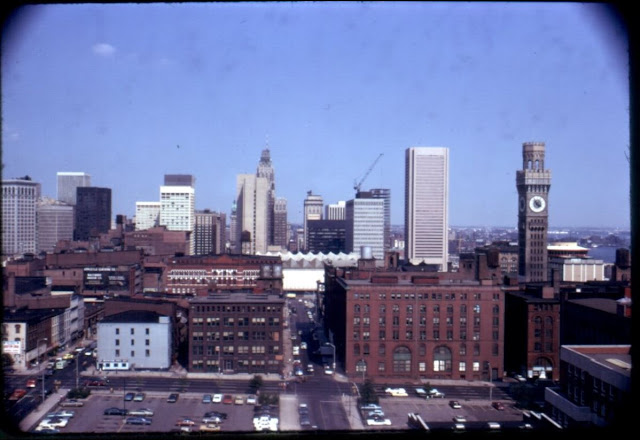 My photo from August 1974 from the 13th floor turret of University Hospital, looking east, sort of down Redwood Street. The construction crane, I believe, is working on 100 E. Pratt, the once IBM building. The parking lot below was not converted to the park and underground garage for another 2-3 years and the Social Work School addition at Redwood and Paca has not yet been built, nor has the Merritt/Schaefer Tower, or the Redwood Apartments next to the Bromo Tower. 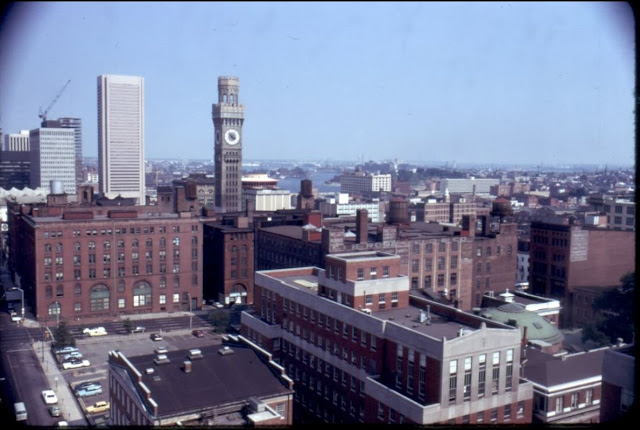 My August 1974 photo from the 13th floor of the old University Hospital looking Southeast toward the harbor. The rotating LaRonde restaurant atop the Holiday Inn is visible and was still functioning then. The dome of historic 1812 Davidge Hall is seen on the lower right, and the buildings on the south side of Lombard Street are still there, once a campus book store and also an old pharmaceutical company. 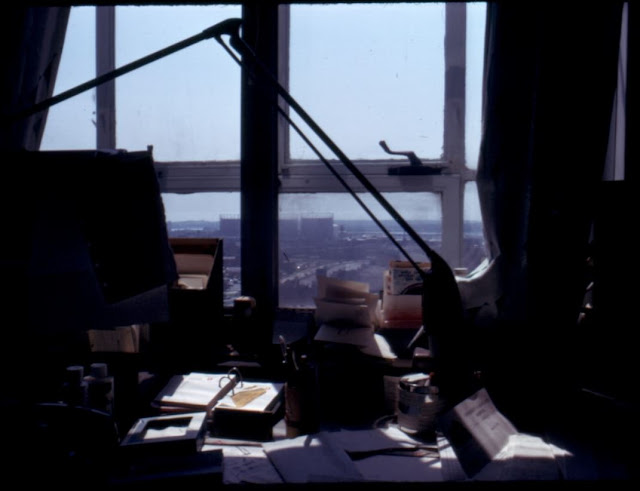 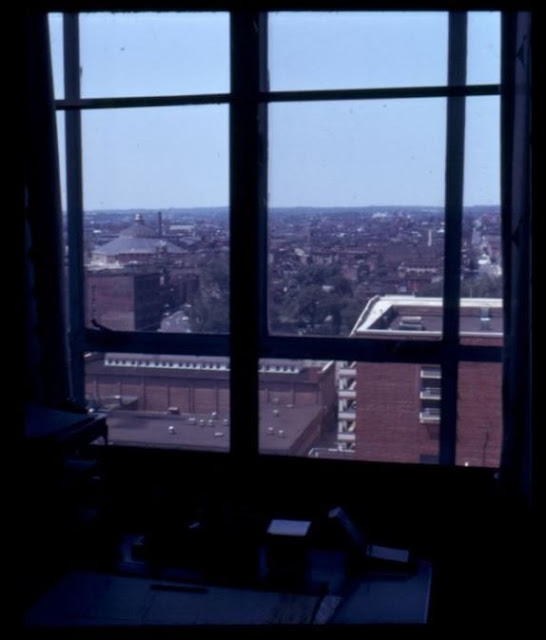 Looking west in August 1974 in my photo from our 13th floor office in the turret-like top of the old University Hospital. The B&O Roundhouse is easily seen and the edge of light colored original University Garage is seen, hidden by the brick Psychiatric Institute. In those days, the Shock Trauma heliport was on the roof of that garage, and patients had to be ambulanced round and round down through the garage and into the basement entrance of the old hospital to get to the 4th floor Shock Trauma unit. The new S-T building with heliport on top would completely block this view today, and the old garage was torn down and replaced with a med school lab and teaching building. 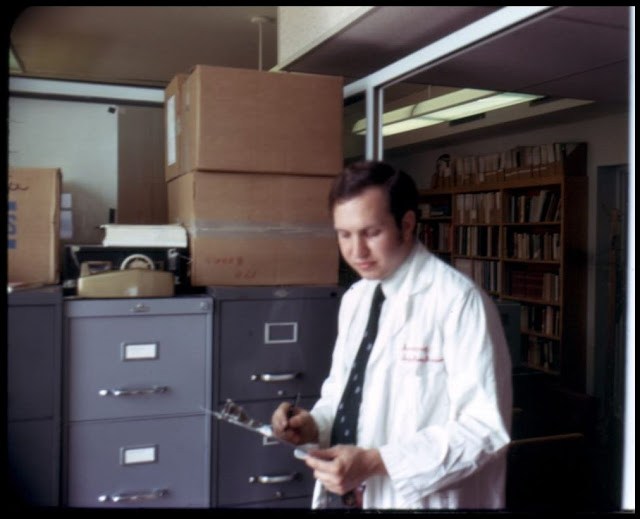 Yours truly as a med student in our 13th floor Infection Control offices. It was a great summer gig for a young guy, as I got to visit every nurses station in the hospital, every day, keeping track of all patients on antibiotics and/or with infections. Met lots of nice ladies and I even dated a few of them until a year or two later when I met my wife of 44 years now, curiously while she was working in the Bacteriology lab at Mercy Hospital. It must be something about those germs. Little did the young man in this shot know that he would one day serve on the board of the medical school, and even more astounding, chair the board of the campus wide foundation which oversees all donations to the 7 UMB schools and is the advisory board for the campus president. Even better, his own son would get an M.D. here, too, our 5th generation in a row to attend the med school. 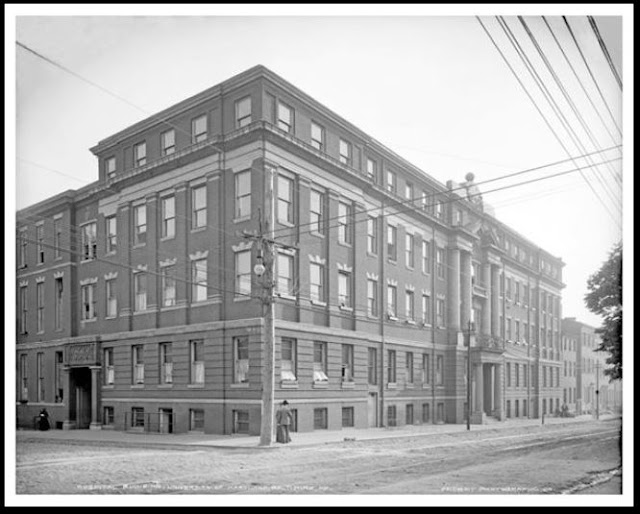 The first University Hospital on the SW corner of Lombard and Greene Streets. I had a chest x-ray taken here when I started med school in 1972 as it housed all of the hospital's outpatient clinics after the 1934 hospital was built up the street. My great grandfather and grandfather were both medical staff members in this building. It was torn down in 1972-3. (Lombard goes to the right on the shot, and Greene to the left.) 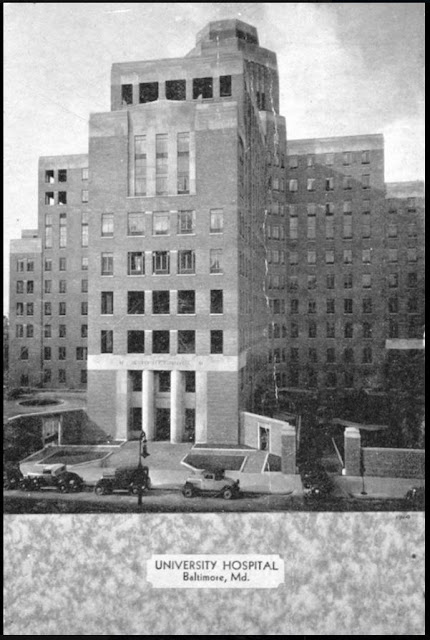 From a postcard in my personal collection, the new Deco 1934 University Hospital at 22 S. Greene Street. Note that at this point, the wings only go to the 10th floor. In the bottom right of the picture is the ramp from Greene Street down to the basement level Emergency Room, which in later years, we affectionately called "The Pit" My father trained here when he was in med school 1947-51. 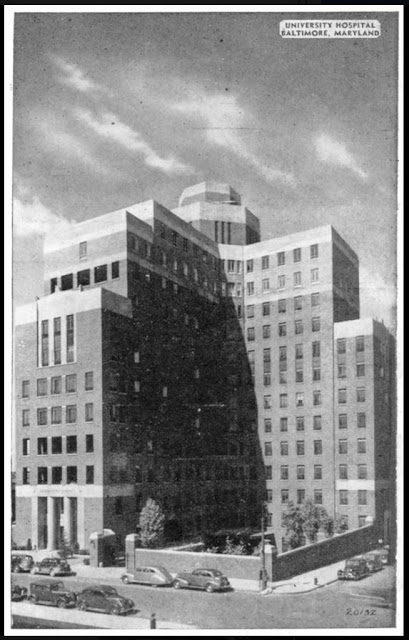 Another postcard from my collection, now showing the additional two floors added to each of the four wings of the cross-shaped 1934 University Hospital. We're looking from the corner of Redwood and Greene Streets. 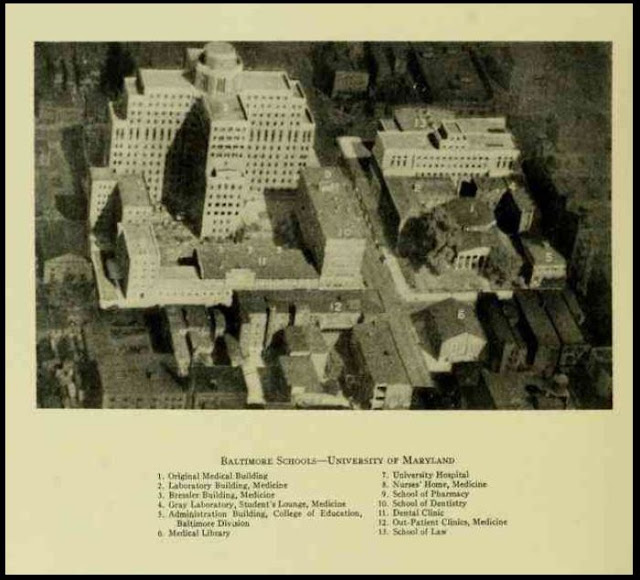 This is a shot from my father's 1951 med school yearbook, Terra Marie Medicus, showing the various buildings of the UMB campus at the time. The cross shape of the 1934 hospital is clearly seen here. My photos were taken from the four corners of the turret like top structure. Number 12 in the pic is the original University Hospital, used as the outpatient clinic building from 1934-1972. The Psychiatric Institute added to the west wing of the 1934 hospital in 1951 is not yet visible in this aerial shot. Number 1 is historic Davidge Hall. Number 2, the Lab Building was the original dental school building which then moved across the street to Number 10 in the photo. In 1972 it moved to a new building on Baltimore Street, and then a few years ago to an even newer tower on Baltimore Street. The 1972 dental building was razed and the new Med School research tower has been built on that site, the largest building in the entire University System of Maryland. 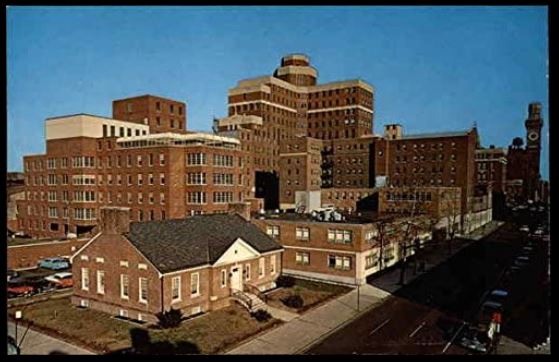 A postcard view of the hospital as it was just before the north addition was finished in 1972. This is looking north west at the rear of the building from the corner of Lombard and Penn Streets. The building with the beige top on the left of the pic is the 1951 Psychiatric Institute addition to the west wing of the 1934 hospital. My photos were taken from the windows of the turret-like top of the hospital, seen well here. Aside from the new North Hospital addition, this was how this part of the campus looked during my years in school and training there, 1972-1981. 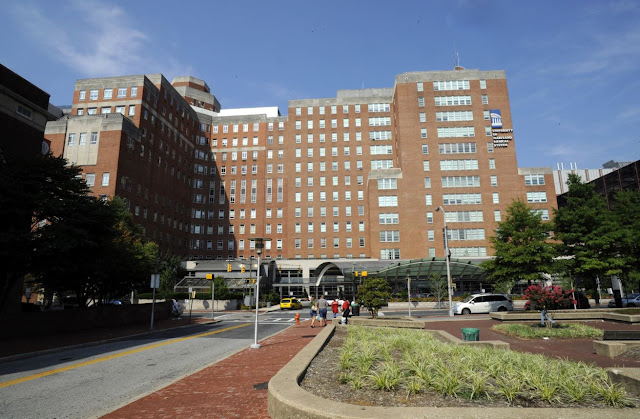 Here's a current view of the 1934 hospital with its 1972 North Hospital addition that blocks Redwood Street between Penn and Greene Streets. The park in the foreground and the underlying parking garage were constructed on the site of an old surface lot beginning in 1981. I watched them work on it from the 7th floor surgical locker room in the front of the north tower. 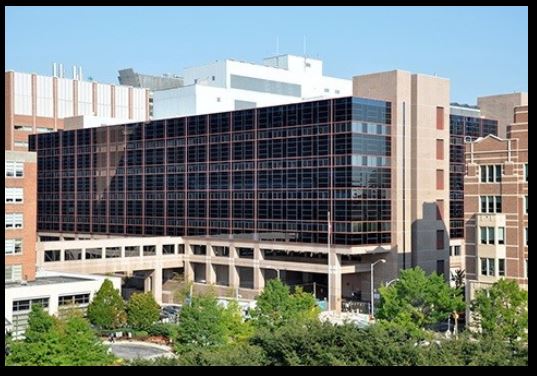 The Baltimore VA Medical Center, now occupies the block formed by Baltimore, Greene, and Fayette Streets and is connected to the North wing of University Hospital by a bridge as you can see here. In my business of radiology, the VA here is famous as it had the very first all filmless radiology department in the world. On the right of the shot is the edge of the new UM Carey School of Law building replacing the law school building that was there when I was in training. During my time on campus as a student and resident, the VA site was occupied by a faculty parking garage and a large surface lot. Parking on campus was so limited that that lot used bumper to bumper stadium style parking, with areas departing at specified times of the afternoon. You better be out there to move your car on time, or you were in hot water! 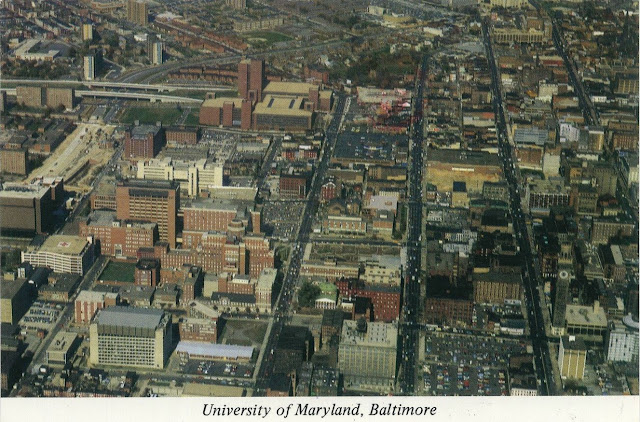 Courtesy of Dr Rick Taylor, this 1982 postcard of UMB shows the then 30 acre campus and hospital as it was then. Note the ongoing construction of the MLK on the left of the shot. You can also see the red cross of the former Shock-Trauma heliport atop the old University Garage. On the bottom left is the then new Pratt garage with gymnasium on the roof, and you can see the grassy former site of the original University Hospital at Lombard and Greene Streets with the adjacent sort of V-shaped student union/dorm building. Original plans were for it to be K-shaped after the old hospital was razed, but they developed more important plans for the site as you'll see. Davidge Hall is visible in the lower mid pic. The new Social Security metro complex is seen at top left center, now a vacant hulk - your tax dollars at work. The beige Carter Center building on Fayette seen here has now been torn down. 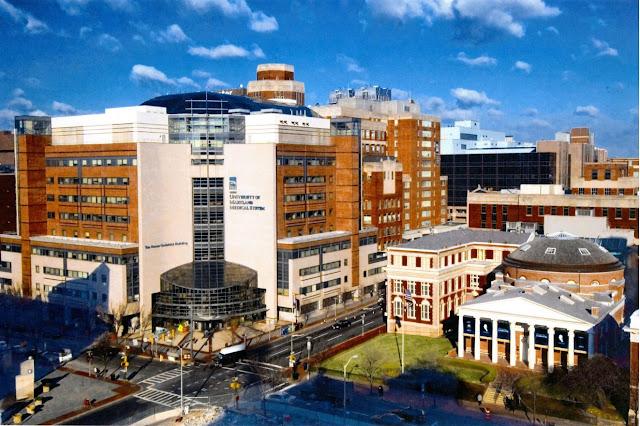 Here's a current view of University of Maryland Medical Center, the modern name for the hospital complex. The new Gudelsky Tower and entrance at Lombard and Greene is shown here and houses the state-of-the-art Greenebaum Comprehensive Cancer Center. This is how the hospital looked during my son's medical school years, and faithful Davidge Hall, where the entire University of Maryland began, is still there and still in use. 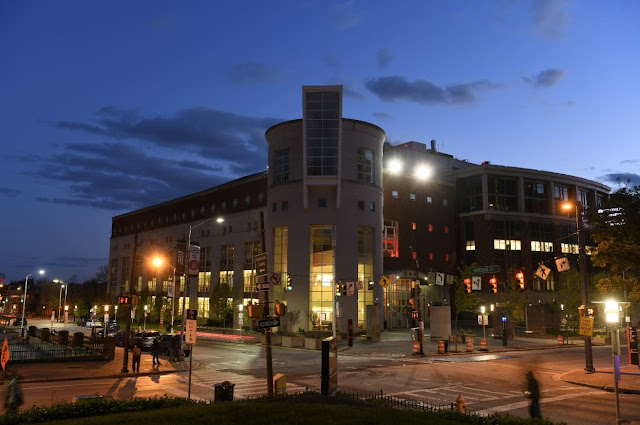 A UMB stock photo of the beautiful Health Sciences and Human Services Library and adjacent Southern Management Student Center, complete with gym and pool, now occupying the site of the original University Hospital on the SW corner of Lombard and Greene Streets. 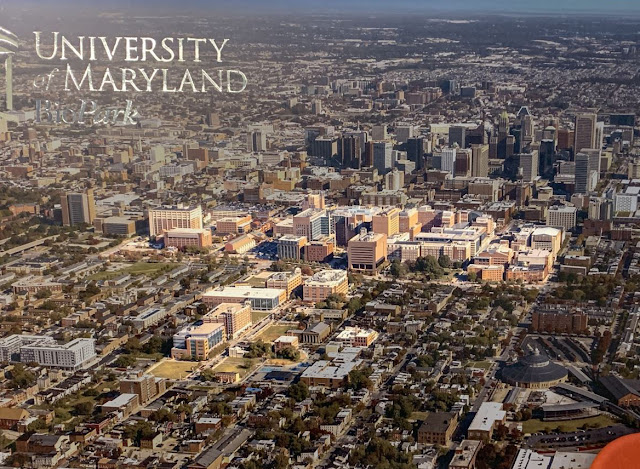 A current aerial view on the now nearly 75-acre University of Maryland, Baltimore campus and BioPark, looking from the southwest. The university is home to the schools of Medicine, Law, Dentistry, Pharmacy. Nursing, and Social Work, as well as a multi-disciplinary Graduate School. Also on campus are the State Medical Examiner's Office, the UMB Community Engagement Center, The Institute of Genome Sciences, The Institute of Human Virology, The Maryland Proton Treatment Center and more. And the campus and BioPark continue to grow, currently extending from Eutaw Street on the east, to beyond Poppleton Street on the west, and from Saratoga Street on the north to Pratt Street and below on the south.
(Photo courtesy of the UMBioPark)


Dr. Knipp was born and raised in Baltimore and graduated from the University of Maryland School of Medicine in 1976. For more than 30 years, Dr. Knipp practiced diagnostic radiology specializing in mammography, breast ultrasound, biopsy, women’s imaging and general diagnostic radiology.