One of the most useful books in my research arsenal is The Medical Annals of Maryland (1799-1899), written by Eugene Fauntleroy Cordell, a long-time member of MedChi and one of our distinguished librarians. 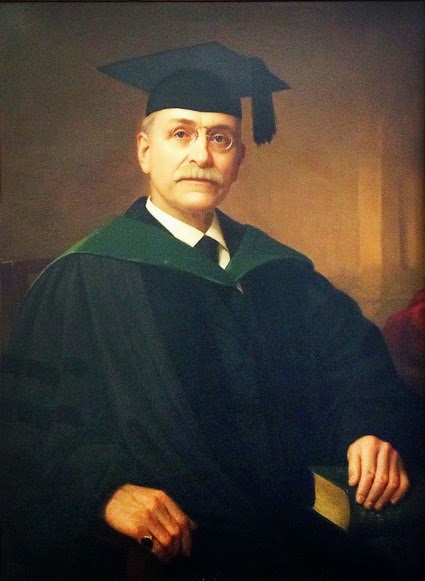 Dr. Cordell was born in Charlestown, West Virginia, which was then part of Virginia in 1843. He fought in the Civil War, and then entered medical school at the University of Maryland, where he graduated in 1868.   He became the “clinical clerk” at the University Hospital, and served as an attending physician in the Baltimore General Dispensary.

From 1870 to 1887, he served intermittently as the Librarian at MedChi. He became very interested in the Maryland Medical Journal, contributed to it often, and eventually became its co-editor. He served as President of MedChi for the 1903-1904 term.

The Medical Annals of Maryland is a huge work – almost 900 pages! It is an exhaustive compilation of the history of medicine in Maryland and chronicles the first 100 years of MedChi’s existence. There are small and large biographies of every member of MedChi from its first days, 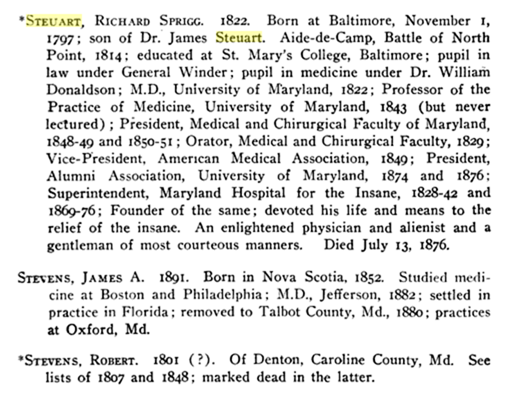 and a detailed history of its early years and each year after that. 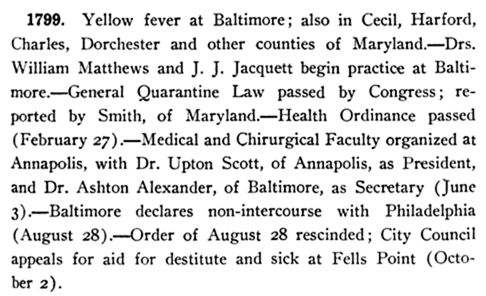 The book has 32 illustrations, mostly of physicians, but also of localities and rooms. The portraits were a great help when I was researching our portrait collection. 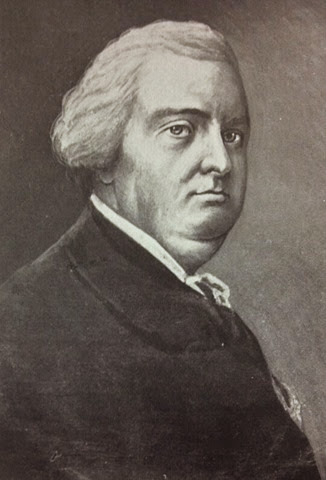 In Dr. Cordell’s portrait, you can see that his hand is resting on his magnum opus, The Medical Annals of Maryland.

In our archives, we have more than 10 boxes of Cordell’s original source materials all organized alphabetically. I haven’t had time to look through them, but I am sure it will be fascinating when I eventually do. We were asked to find a birth date for an 19th century physician, and I said that if it wasn’t listed in the Cordell book, then the information didn’t exist here at MedChi.

While I have a copy of the book sitting on my desk, I barely crack it open. And even though the book is more than 100 years old, I find that I still have to cut the pages before I can read them. Instead of searching the index of the book, I refer to the version digitized by the Harvard Library. It’s a searchable document , and I can cut and paste passages from it.

Handily, the search results are listed by relevance or pages, and you can toggle between the two. I’ve been able to search for obscure terms that don’t appear in the book’s index. I can only imagine what Dr. Cordell would think of that!

The Marcia C. Noyes Award is the highest honor given to a professional medical librarian, and it was awarded at the Medical Library Association’s annual conference in Chicago on May 19, 2014. The recipient was Joanne Joanne Gard Marshall, AHIP, FMLA, from the School of Information and Library Science, University of North Carolina-Chapel Hill. 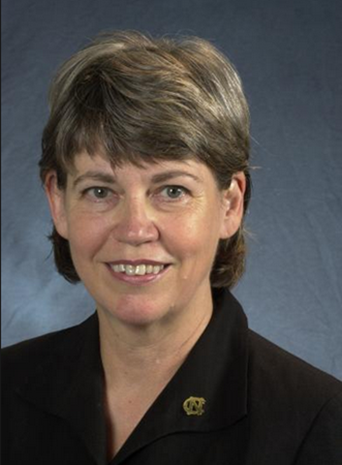 Dr. Marshall is a worthy recipient of this award with a list of accomplishments, including twice serving on the MLA Board of Directors, including as president in 2004/05. She is a currently an MLA Fellow and a Distinguished Member of the Academy of Health Information Professionals. Dr. Marshall has been honored with a multitude of the most prestigious professional awards including the 2013 Janet Doe Lectureship, Special Libraries Association Fellowship in 2001, the 2010 Donald A. B. Lindberg Research Fellowship, and Honorary Life Membership in the Canadian Health Libraries Association/ Association des Bibliotheques de la Sante du Canada in 2000, just to name a few.

Dr. Marshall’s name is synonymous with the groundbreaking 1992 Rochester Study and its successor, the recently completed Value Study. While the idea that medical librarians support patient care is not a new one, the study provided much-needed evidence of this fact on a large scale, updated for the current times. The study will doubtlessly be cited for years to come. As a highly skilled researcher, Dr. Marshall has led the way in conducting research that has an impact on the profession and on the health sciences as a whole. She has used her leadership ability to serve professional organizations by developing policies and chairing committees.

Like Marcia Noyes, Joanne Gard Marshall is a noted example of excellence in the medical library field. She joins a list of recipients who have advanced the profession and carried on Marcia’s legacy in the field. 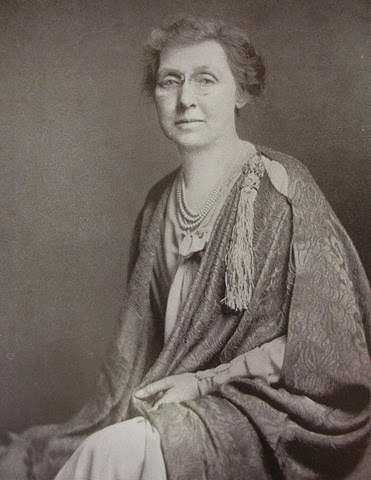 All of us at MedChi send along our congratulations to Dr. Marshall, and to complete the circle, a bouquet of spring flowers was presented to Dr. Marshall on MedChi’s behalf at the awards luncheon, as Dr. William Osler presented bouquets of flowers to Marcia on special occasions.

In a note from Dr. Marshall, she said:

Thank you for the lovely bouquet that you sent to Chicago for the Noyes Award. It was the most beautiful bouquet I have ever seen and it made the presentation so special. I had not known a lot about Marcia Noyes and her extraordinary contribution to the field, but I am much more aware of that now. I hope I can visit the library at your historic site sometime when I am in the Baltimore area.

Thanks to the staff, especially Maria Lopez, at the MLA for helping us facilitate the presentation of the bouquet.

Max Brödel, the noted first professional medical illustrator, came to Baltimore in the early years of Johns Hopkins Medical School. He was hired to do medical illustration for MedChi members Howard Kelly, MD, Harvey Cushing, MD, and William Halsted, MD. Later on, he branched out and worked for Sir William Osler, MD and Thomas Cullen, MD, who published a small book about his close friend. 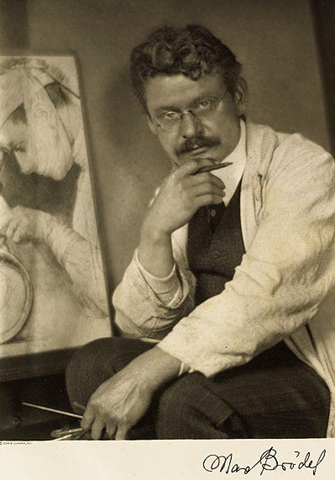 When Kelly retired, Brödel floundered until his friend Dr. Cullen devised a strategy where Brödel would establish a medical arts department and train students in medical illustration and the medical arts. With an endowment from Baltimore philanthropist and art lover, Henry Walters, the first ever medical illustration program was opened at Hopkins. The program continues as a masters-level department and is known as the Art as Applied to Medicine Department.

Brödel’s association with MedChi comes in numerous ways. For years, MedChi’s seal was a rather ominous looking Hippocrates often portrayed in red and black. 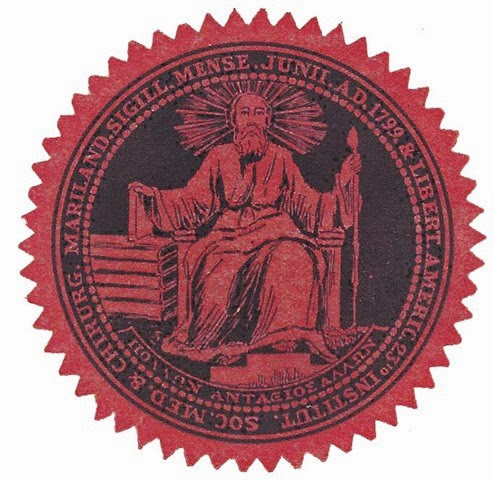 In 1911, Brödel made some sketches which updated the seal, added detail in the background, softened the look of Hippocrates and titled the books. 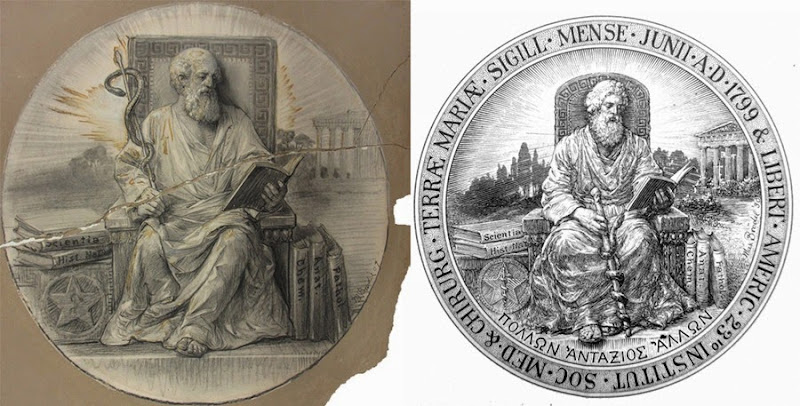 But Brödel’s association with MedChi doesn’t end there. He also provided illustrations for bookplates for a number of special book funds. The plates are incredible in their detail, especially when you realize that for the first half of the 1900’s, there was no mechanism to shrink or expand illustrations, and that the engraving plates had to be life-size, which meant about 3 x 4.5 inches.

Brödel’s illustration for the Osler Fund includes the crests for the four schools with which he was closely associated: Penn, McGill, Hopkins and Oxford. The figure is probably Hippocrates and the Rod of Asclepius appears twice. The plate is signed just above the Oxford crest. 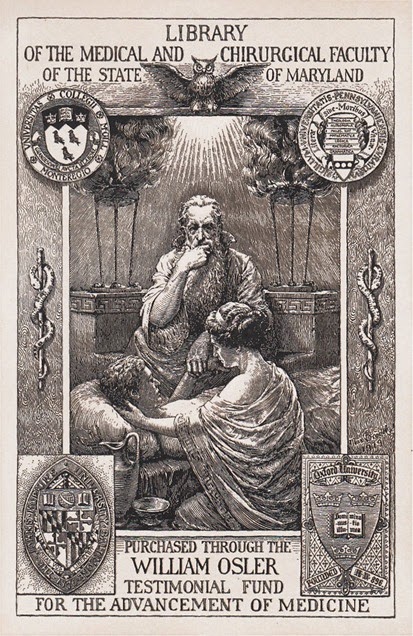 For Dr. Cullen, who was one of his best friends, the bookplate is illustrated with an image of Hopkins’ distinct dome and its location at the crest of a hill. It shows Dr. Cullen at his microscope with his books behind him. 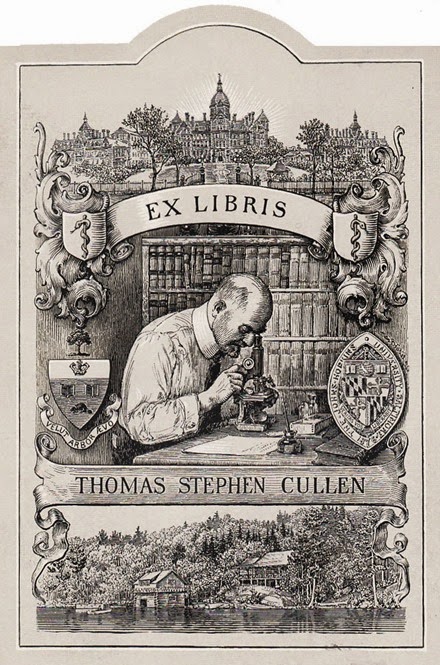 The crests are possibly Toronto University on the left and Johns Hopkins on the right. On the bottom of the plate is an illustration of Cullen’s lakefront camp in Canada, where Brödel also had a camp. Dr. Cullen was originally from Canada, as was Sir William Osler. In Dr. Cullen’s book, he mentions this bookplate, saying “the theme was arranged by Mrs. Cullen and Max”.

One of the pieces in MedChi’s collection is the original illustration for the bookplate for John Ruhräh, MD. What’s particularly interesting about this piece is the original notes which have been written on the illustration, working out which font to use and the size, whether the quotation is a little morbid and dreary and what the titles of the books on the shelves should say. 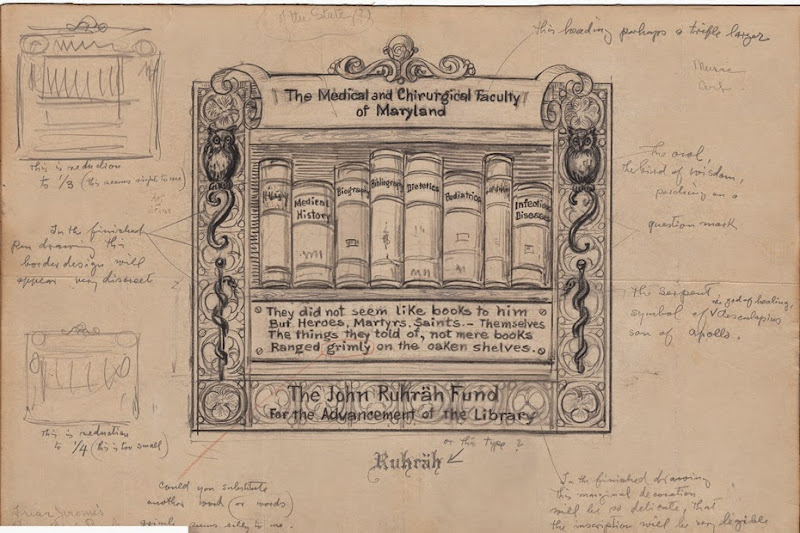 This is the finished bookplate, and I’ve seen it in the front of many of our volumes. 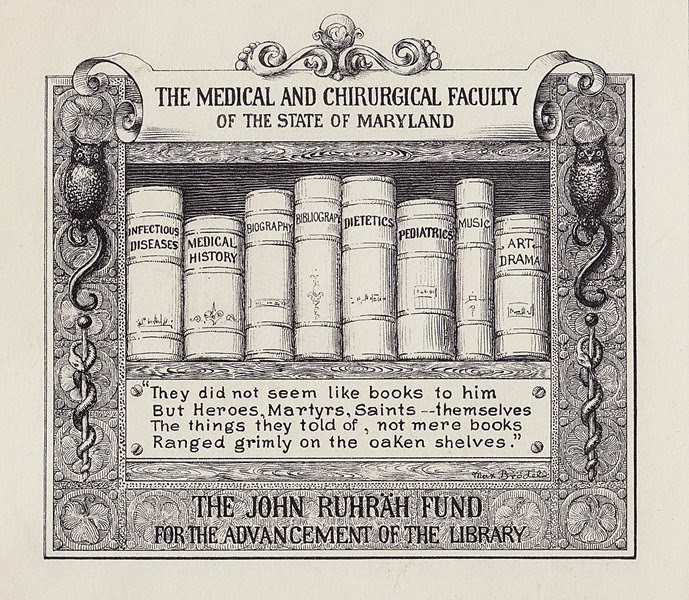 Another plate that Brödel illustrated was for the noted physician Dr. J.M.T. Finney, who was instrumental in establishing Union Memorial Hospital in Baltimore. We know less about this plate than the others but it’s fascinating nevertheless. All of the characters are there – Hippocrates, the Rod of Asclepius, Death with his scythe, 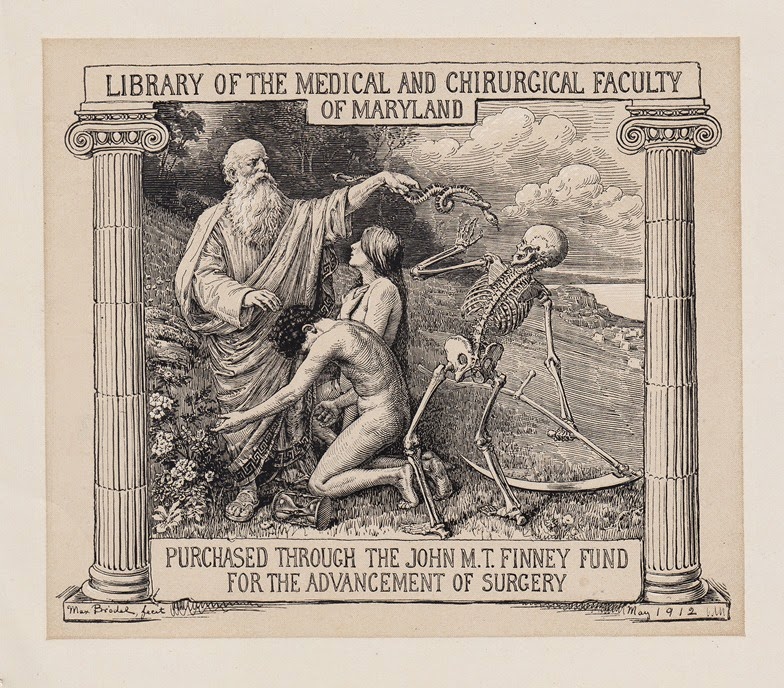 I put together a small collage of these bookplates for a history hallway we’re designing. 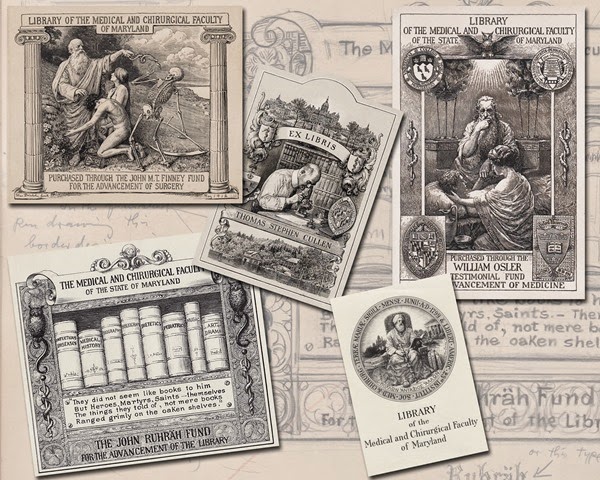 Here’s something I found as I was researching Max Brödel: It’s a Max Brödel BOBBLEHEAD! Click on the image for more views of Bobblehead Brödel! 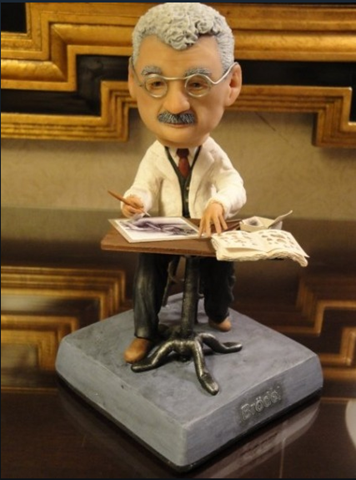 Max Brödel was made an honorary member of the Medical & Chirurgical Faculty of Maryland in 1909, the first and only layman to be accorded this honor.

One of the non-medical groups which members of MedChi participate in is called “Opera Docs”. Working with the Lyric Theatre, our neighbor just to the north, invited guests and friends have a casual supper at the Lyric and then listen to one of our physicians give a lecture on a topic relevant to the current opera. Following that, the guests attend a full dress rehearsal of the opera, which opens several days later. 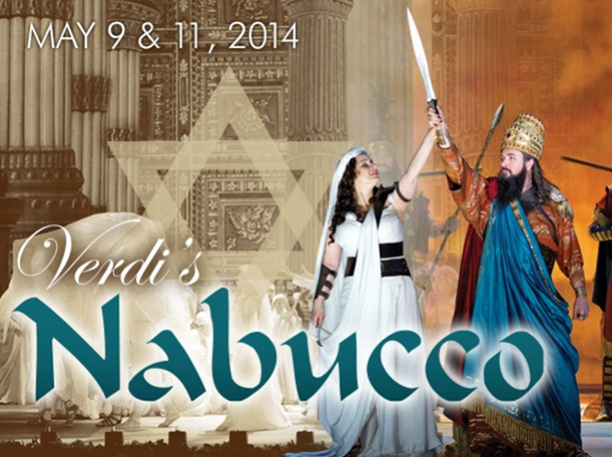 Some of the topics that have been discussed are medical conditions, psychiatric issues, biblical history and politics. At the most recent Opera Docs gathering, the speaker talked about the history of Nabucco, which parallels a story in the Old Testament. 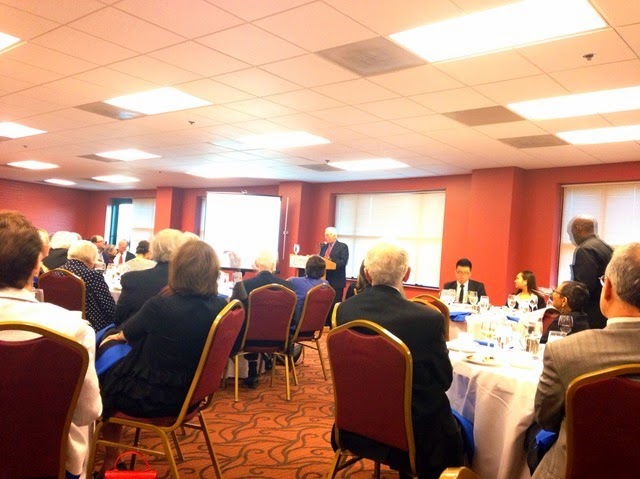 Nabucco, King of Babylon (King Nebuchadnezzar) has enslaved and oppressed the Hebrews, but his presumed daughter, Abigaille, has fallen in love with the Jewish Ismaele, and secretly works for their freedom. Nabucco’s pride leads to his downfall, when he proclaims himself God and is struck by lightning. This beautiful opera, containing the beloved chorus “Va, Pensiero” ends as Abigaille and Nabucco recognize the Hebrew God as the one true God.

Here are some images from Nabucco’s dress rehearsal. 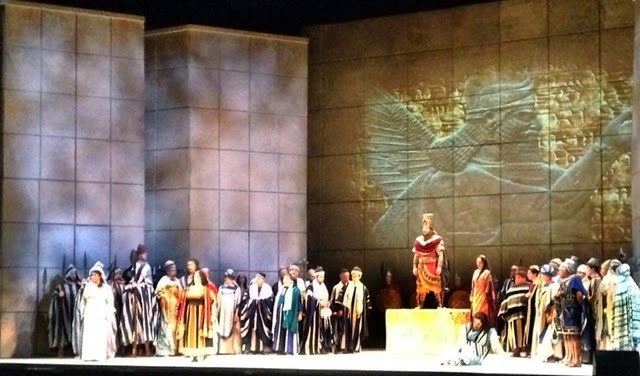 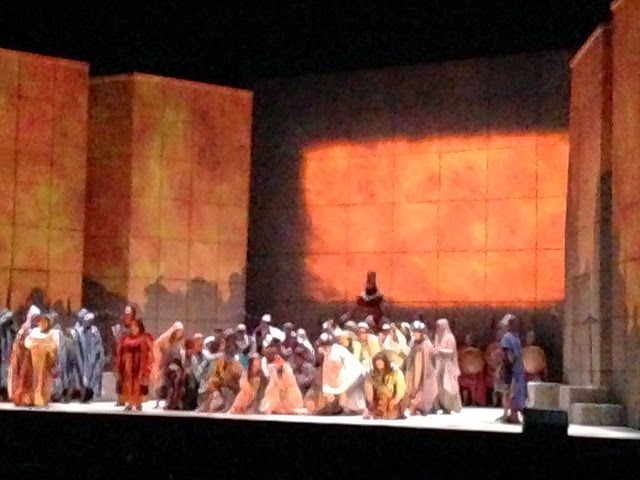 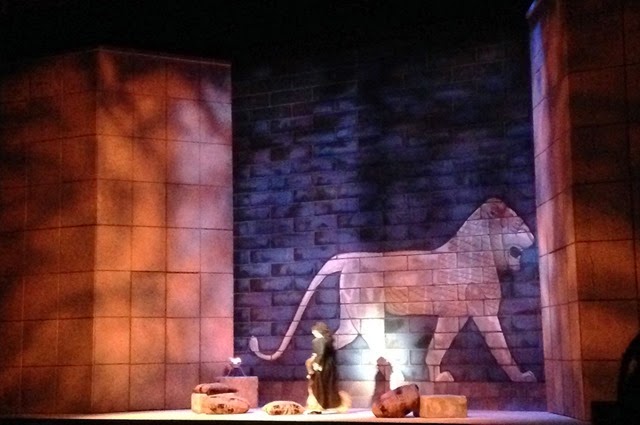 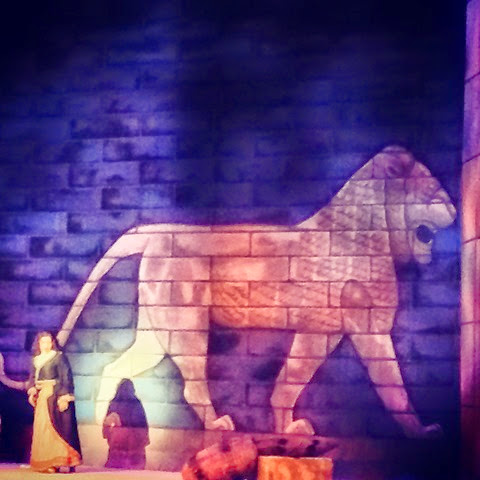 On October 2013, the group attended a lecture and rehearsal of Tosca. 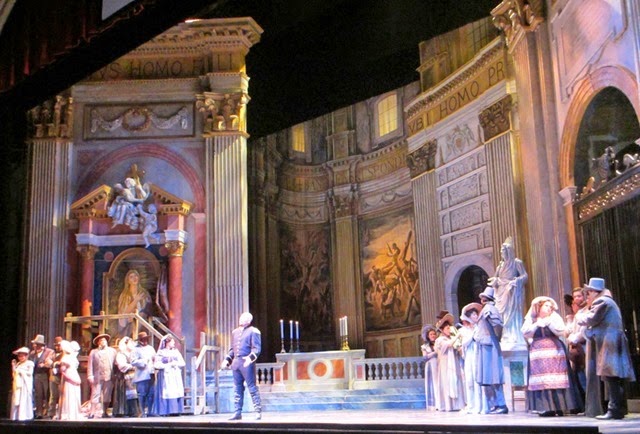 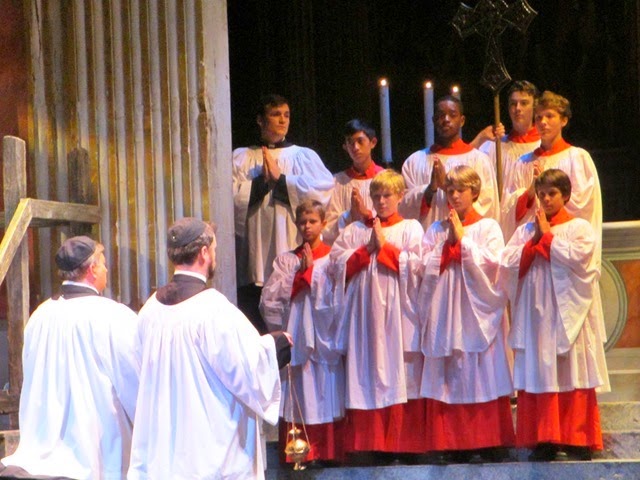 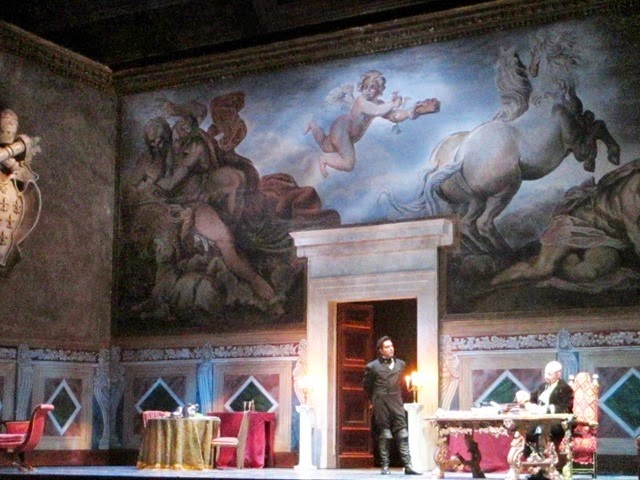