From everyone at MedChi and the Center for a Healthy Maryland,
including Marcia, we wish you a very Happy Easter! 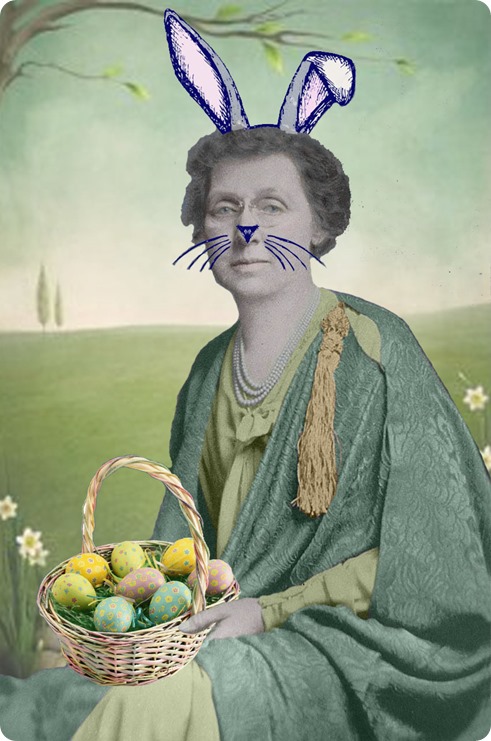 Max Brödel, the early 20th century medical illustrator at Johns Hopkins, had an excellent sense of humor. I frequently find his illustrations in our journals, and they’re so beautifully done.

In honor of Easter later this week, I thought this was a perfect one to post. 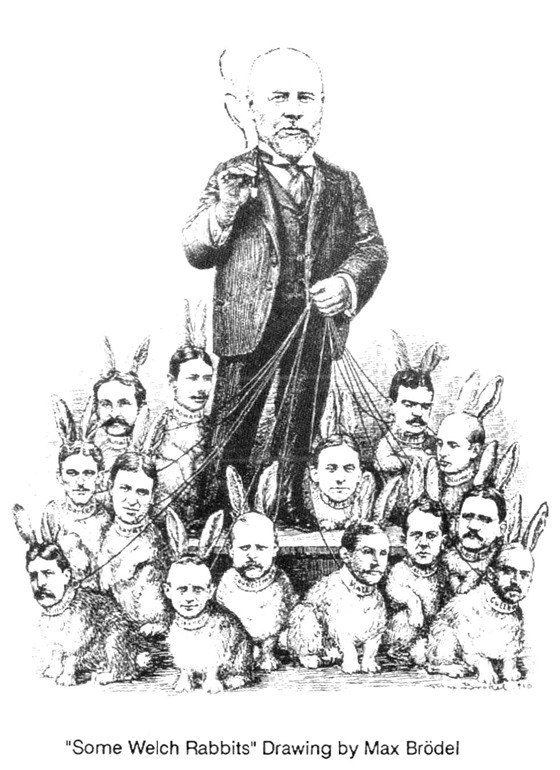 It’s a caricature of the famed William Welch, MD, cigar in hand, leading his students who are portrayed as rabbits. I am sure that the faces on the rabbits are perfect sketches of Welch’s students at the time. It’s too bad that there isn’t a way of knowing who’s who!

As I was searching for something in a 1989 Journal, I saw that the cover image was of John Morris, MD. I really didn’t know a lot about him, and was always intrigued by his portrait, especially the fur collar he’s wearing. Luckily, there was a brief biography of the good doctor and now I know. 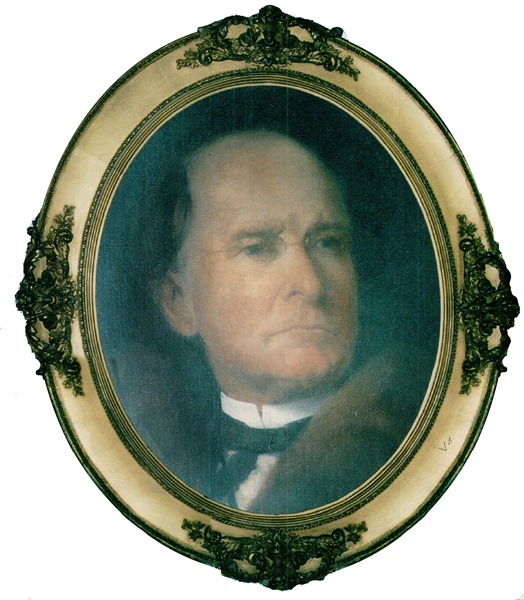 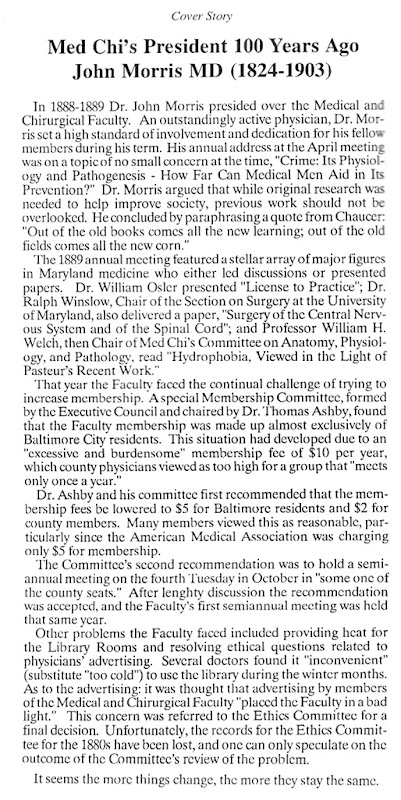 We’re in the process of working with the University of Maryland School of Medicine’s Health Sciences & Human Services Library to digitize the Maryland Medical Journal. It’s a massive project, and will take some time. 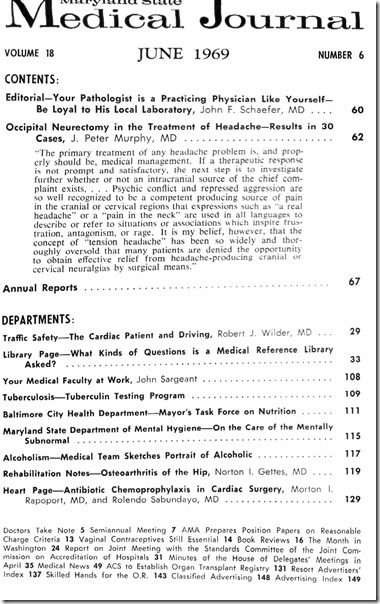 Before that happens, I’ve scanned in the tables of contents from several decades of the MMJ. I frequently get requests to find specific articles and references, often with the most vague specifications, such as “it was an article that appeared sometime in the 1980s”, which is literally no help at all. 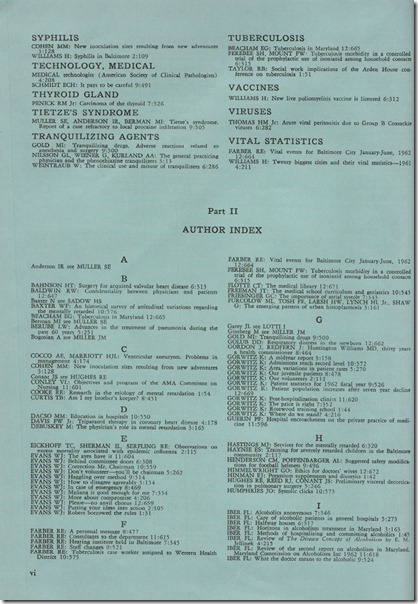 The order in which I’ve scanned the Journals is somewhat random, mainly because I was looking for something else, so just scanned in a year here and another year there. Right now, I can just flip through the tables of contents and indices and see if I can find what I need, rather than pulling out all of the books.

It’s our hope that by the end of 2016, several decades of the Maryland Medical Journal will be digitized. Here’s just a peek at one year. Click here.

What I Found on My Desk: Isaac Ridgeway Trimble

I guess that should really read who I found on my desk. It’s a small comemmorative paperweight for Isaac Ridgeway Trimble, the surgeon. He was born in 1860 and died very young, in 1908. 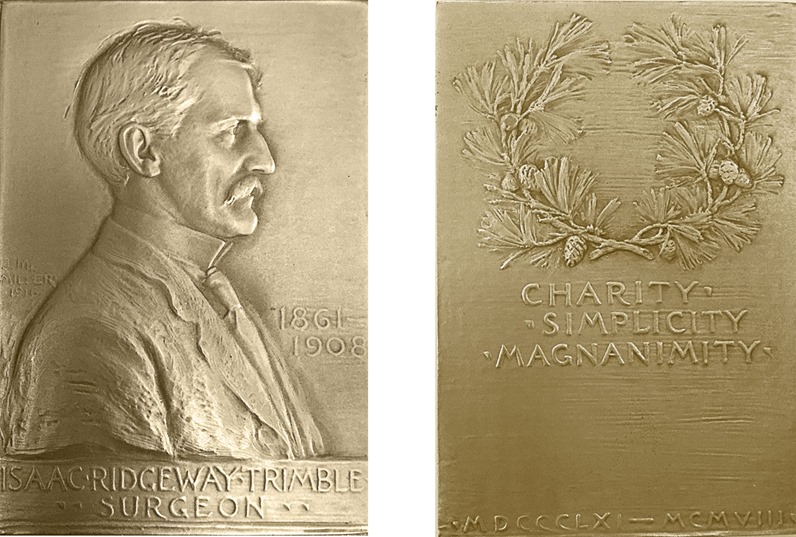 Isaac Ridgeway Trimble was born at Wye House in Talbot County, Maryland on October 10, 1860. He was a member of an old Maryland family whose roots extended back to the early days of Maryland’s founding. He was the grandson of Major General Isaac R. Trimble, a hero of the Confederate Army. He was educated at Shenandoah Valley Academy and Johns Hopkins University. He received his M.D. from University of Maryland in 1884. 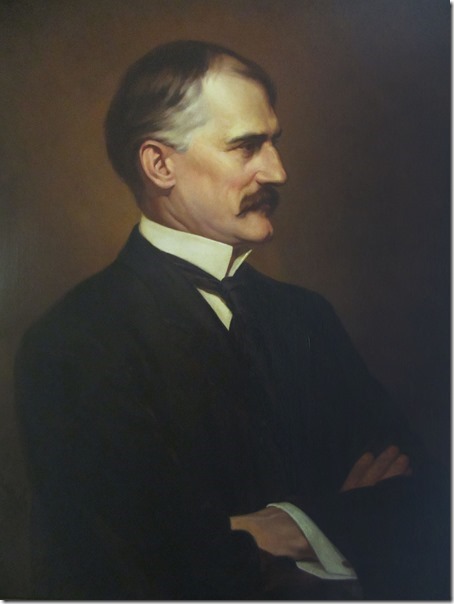 Dr. Trimble was a Resident Physician at the University Hospital, 1884-85; Assistant Surgeon, Fifth Regiment of Maryland National Guard from 1889 to 1899; Surgeon, Baltimore and Ohio Railroad, from 1890 until his death; Professor of Anatomy and Operative and Clinical Surgery, Woman's Medical College, Baltimore, 1891-99; Dean, Woman's Medical College, 1894-96; Lecturer on Clinical Surgery, University of Maryland, 1894-99; Professor of Anatomy and Clinical Surgery, College of Physicians and Surgeons, Baltimore, 1899-; Surgeon in Chief, United Railway and Electric Company of Baltimore.
Dr. Trimble was a member of many of the influential clubs and societies in Baltimore during his lifetime. He also had a large and influential medical practice, and gave what spare time he had to the Medical and Chirurgical Faculty. He died young from blood poisoning following surgery on an inflamed kidney on February 24, 1908. A lecture series was later established in his name, and from the program comes this explanation:

Oddly, there’s no information about Dr. Trimble in the Medical Annals of Maryland, although he would have fit in the 100+ year time-frame of the book.
The plaque or medal or paperweight is quite small, about 3x2.5 inches. It looks to be bronze and is beautifully detailed. He had quite a striking profile. 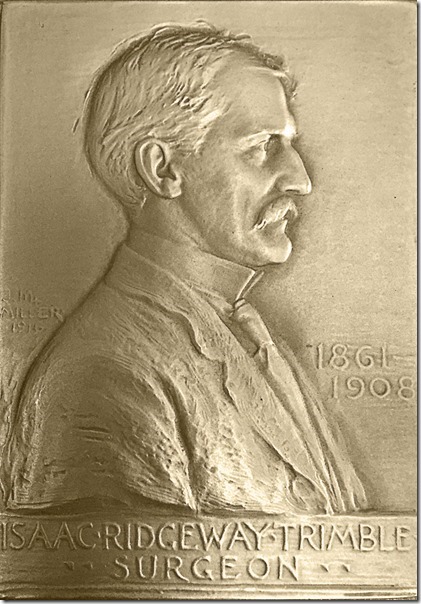 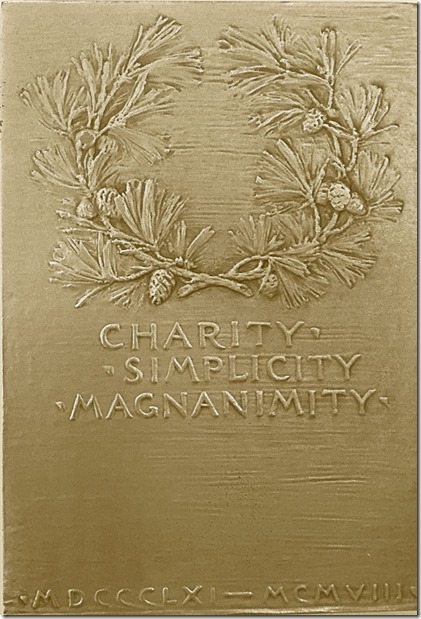 If you look just behind Trimble’s shoulder, you can make out the words, J.M. Miller, 1916. I am informed by my sources that this is Joseph Maxwell Miller (1887-1933), a sculptor living and working in Baltimore at that time. Here’s a little information that I gleaned from the Archives of American Art:

Miller received his diploma from the Maryland Institute for the Promotion of Mechanical Arts in 1897; two awards, an Honorable Mention from the Society of French Artists, Salon 1902 and Silver Medal from the Louisiana Purchase Exposition, St. Louis, Missouri, 1904; sculptor of the monument to the Confederate Women of Maryland;
Biographical/Historical Note: Sculptor; Baltimore, Maryland. Received his early art education at the Maryland Institute where he won the Rinehart scholarship to study in France. He showed at the Salon des Artistes and was made officer of the Academie Francais. He was a member of the National Sculpture Society and the Charcoal Club. He is buried in Green Mount Cemetary in Baltimore.

Email ThisBlogThis!Share to TwitterShare to FacebookShare to Pinterest
Labels: Bronzes, On My Desk

International Day of the Woman: Woman’s Medical College of Baltimore

In honor of International Women’s Day, I thought I’d write about the Woman’s Medical College of Baltimore. In the late 1800’s and early 1900’s, there were seven medical schools in Baltimore, one of which was this short-lived school of medicine, which served a much-needed purpose in its day.

The school opened in 1882 with an ambitious curriculum and many well-known physicians as lecturers and teachers, as evidenced by this piece in the 1882 Maryland Medical Journal. 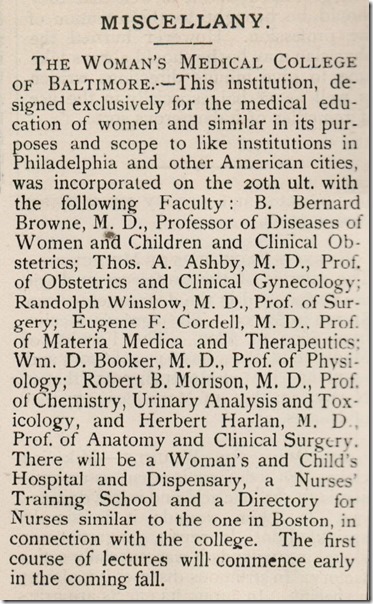 There are some old images of the school, which looked to be quite handsome! As much as I have searched, and I admit, there are still a few places to look, I can’t come up with an address for the school. Silly me! All I needed was a quick email to the Health Sciences & Human Services Library at the University of Maryland School of Medicine and Rich Behles gave me the answer in less than five minutes! The Woman’s Medical College of Baltimore was located at 126 N. Eutaw Street in Baltimore, just across from the historic Lexington Market. 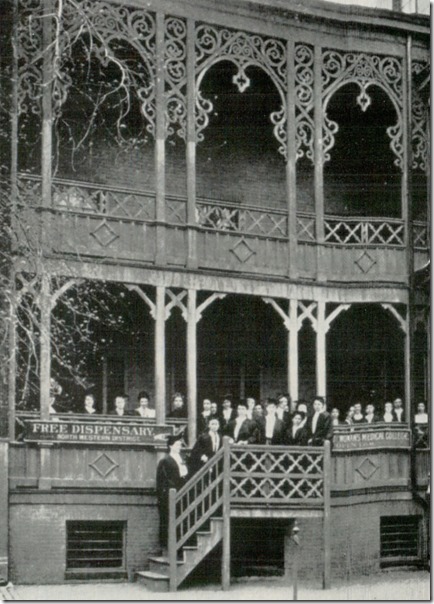 Among the most well-known of the graduates of the Women’s Medical College is Claribel Cone, the famed art collector, whose collection is housed at the Baltimore Museum of Art. 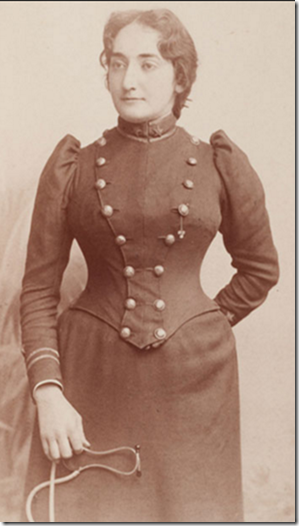 In the 1880’s, the Faculty changed the wording of the membership requirements from “gentlemen” to persons because of the number of women and African-Americans who were becoming physicians.

By the 1890’s, Johns Hopkins School of Medicine was up and running and as a condition for receiving a significant donation, they were required to accept women into the program, much to the chagrin of the men running the school. But they were over a barrel and did what they needed to do.

But after the Flexner Report was released, and the results became well-known, all but two of Baltimore’s medical schools gradually closed or merged with other schools. One of those schools was the Woman’s Medical College of Baltimore. Here’s Flexner’s report on the school: 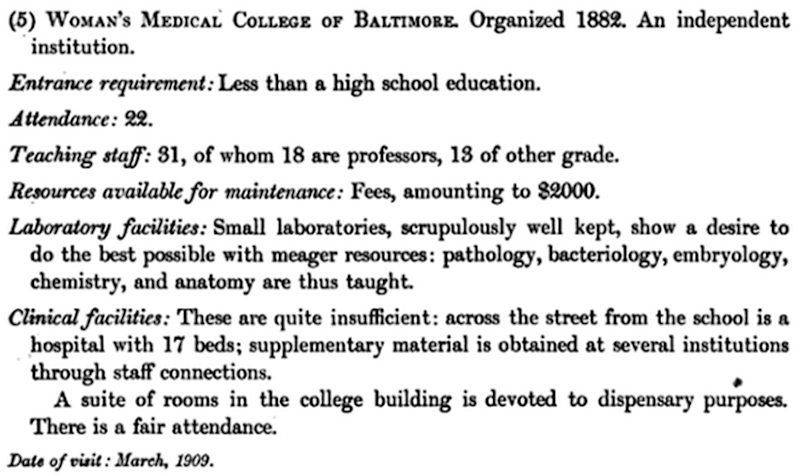 In 1909, the decision was made to shutter the Woman’s Medical College, and this announcement appeared in the Medical Journal of that year. 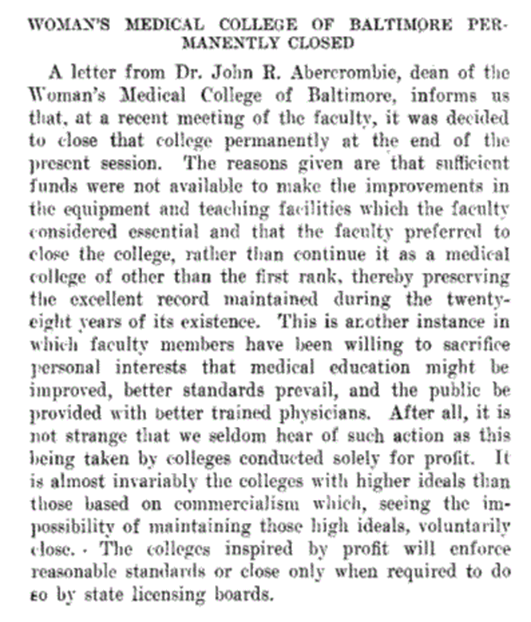 In looking at the Medical Journals, I also found this brief essay by Mary Putnam Jacobi, an early physician and suffragette. 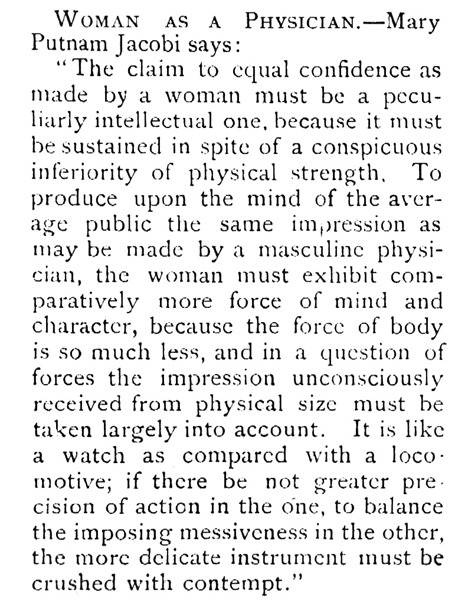 Look Who I Found!

Although I sound like a crazy person when I say it, I truly believe that Marcia finds things for me. Most recently, I was working in the stacks, and when I was shutting off the lights, and closing the door, I happened to look down and see the corner of a picture frame.

I yanked it out and discovered a gorgeous oval frame with a handsome man in it. The picture appears to be an enlarged photograph of a painting, and is listed on the 1961 acquisition list as a photo enlargement. 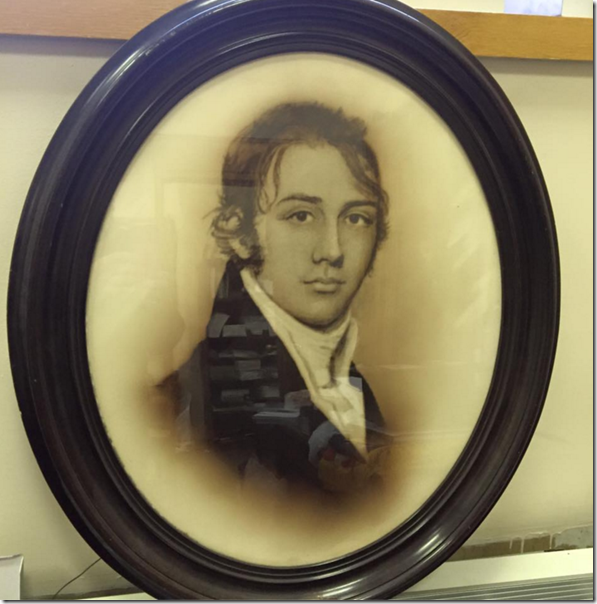 Luckily, there was an acquisition number on the reverse, so with a few keystrokes, I was able to find that it was Peregrine Wroth (1786-1879), an Eastern Shore physician in the 1800’s. He was educated at Washington College in Chestertown, and was a student of Drs. Edward Worrell and Morgan Brown. He attended lectures at Penn, and received an honorary degree in 1841 from the University of Maryland.

Wroth began practicing in Chestertown in 1807 as a partner of Dr. Brown, and taoght at Washington College from 1846 to 1854. He was also the President of the school’s Board of Visitors. The image below is from Cordell’s Annals. 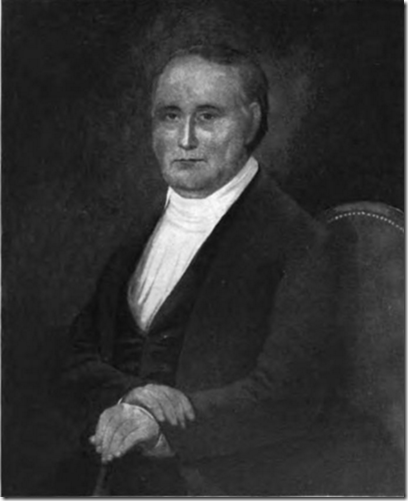 Email ThisBlogThis!Share to TwitterShare to FacebookShare to Pinterest
Labels: On My Desk, Portraits 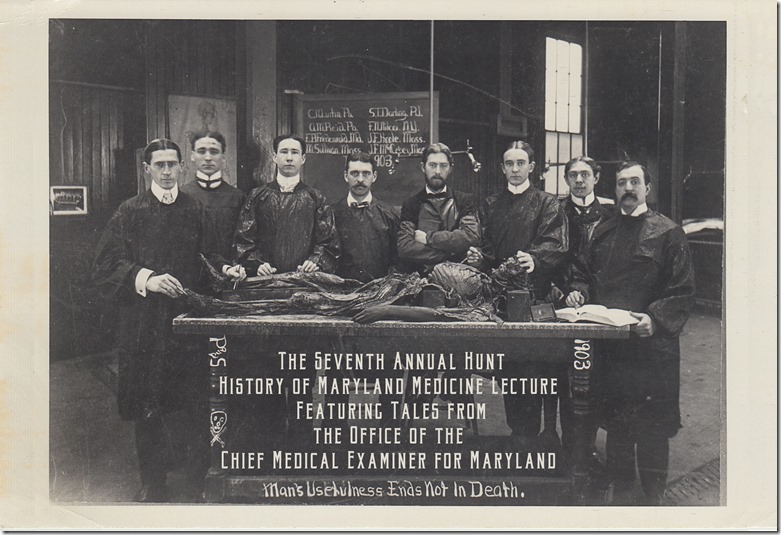 Please Save the Date for the Seventh Annual
Thomas E. Hunt, M.D. History of Maryland Medicine Lecture
Tales from the Office of the Chief Medical Examiner for Maryland
Thursday, May 26, 2016 at MedChi's Osler Hall.

This year's History of Maryland Medicine Lecture will feature Tales from the Office of the Chief Medical Examiner of Maryland presented by Bruce Goldfarb of the OCME.

The Maryland ME's office is the first state-wide medical examiner in the country, established in 1939 at the suggestion of members of MedChi. The ME's office is home to the Nutshell Studies of Unexplained Death, a series of miniature rooms depicting crime scenes used to train detectives in the art of finding evidence. The ME's office also contains Scarpetta House, a crime scene house funded by novelist Patricia Cornwell.

The six-year old, $43 million Forensic Medical Center is the largest free-standing medical examiner's office in the country. State-of-the art forensic investigation tools help with the autopsies of more than 8,000 bodies each year and investigations of another 10,000 deaths. The OCME is also equipped with a bio-safety laboratory to handle investigations of infectious agents.

The Hunt Lecture will take place on Thursday, May 26th in MedChi's Osler Hall. A reception will be held at 5:45 and the lecture will begin at 6:30 p.m. This promises to be a fascinating evening.