Today is National Doctor's Day, and if there is a time that everyone should be thankful that we have doctors in our lives, this is it. 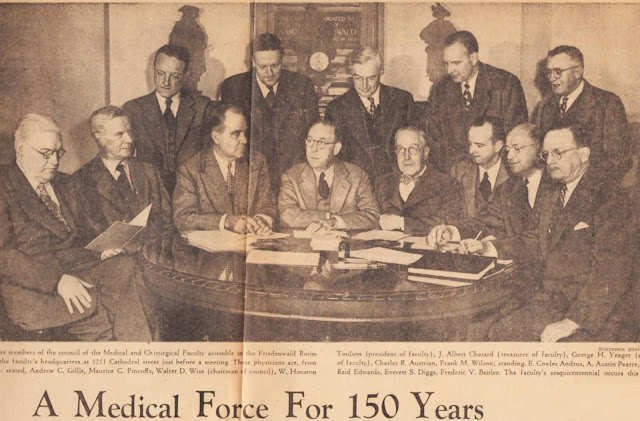 From our beginning in 1799, when the Medical & Chirurgical Faculty of Maryland was organized to prevent quackery and pretenders to the medical arts, to the current COVID-19 pandemic, physicians and surgeons have been the helpers at the front lines of the battle. 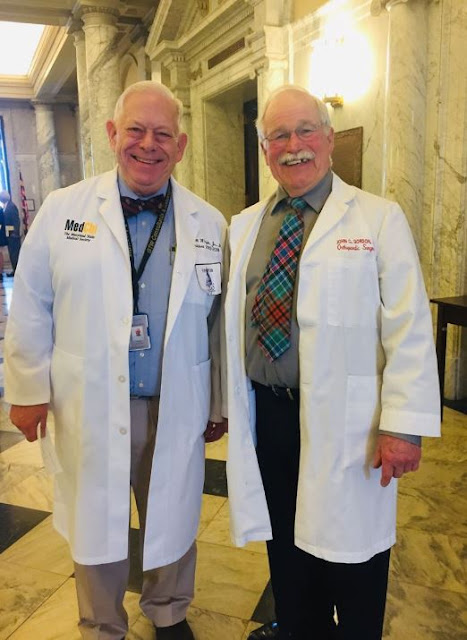 Please take a moment to thank a doctor today, when we need them now, more than ever.
Posted by Meg at Monday, March 30, 2020 No comments:

I continue to find new pieces and great stories every time I explore our offices! I was up in Marcia's old apartment with some contractors, and we were moving some things. There, up against the wall was a huge (30x30 inches) bronze in a wooden frame. 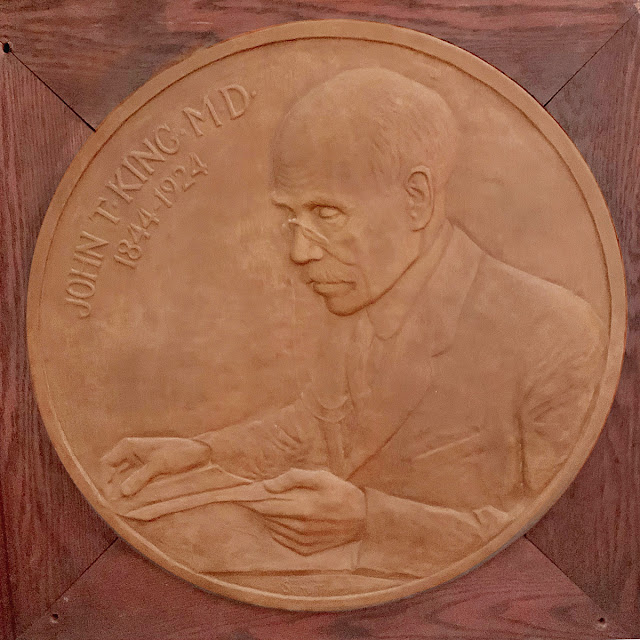 Obviously, I didn't try to bring it back downstairs for study, but snapped some pictures of it to check later.

Luckily, the name of the sitter is right there and so there was no question as to who it was. John T. King, MD. He's listed in the Centennial book, so that was a start to my research.

Most unfortunately, John King is a pretty common name, and the year King died, another man with the exact same name, had bilked a number of people out of large sums of money, and was on trial. That filled most of the newspapers in the early months of 1924.

But I kept digging and found King's obituary in December of 1924. 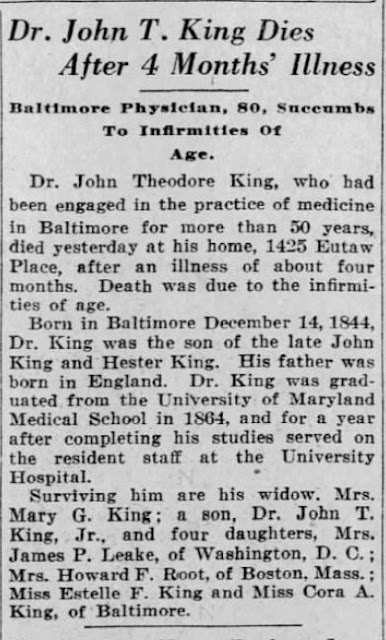 There is no mention of his involvement at MedChi, which must have been significant for him to have been honored with a large bronze plaque. 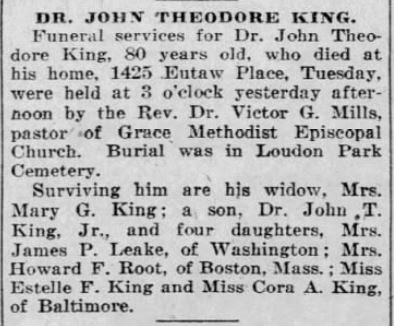 There are holes in each of the corners of the plaque, which leads me to believe that is had been hanging someplace in the building. We do have a number of other bronzes around the property. And as I mentioned in that post, I figured that there were bronzes that I hadn't found yet... and there were!
Posted by Meg at Thursday, March 26, 2020 1 comment:

I had the opportunity to speak with a group from the University of Baltimore on the topic of Women, Employment & Adversity. As my subject, I chose Marcia Noyes.
Marcia Crocker Noyes was the librarian here at MedChi. She arrived here for a short visit in 1896, after graduating from Hunter College in New York, and on a visit to her sister who worked at the Pratt Library. 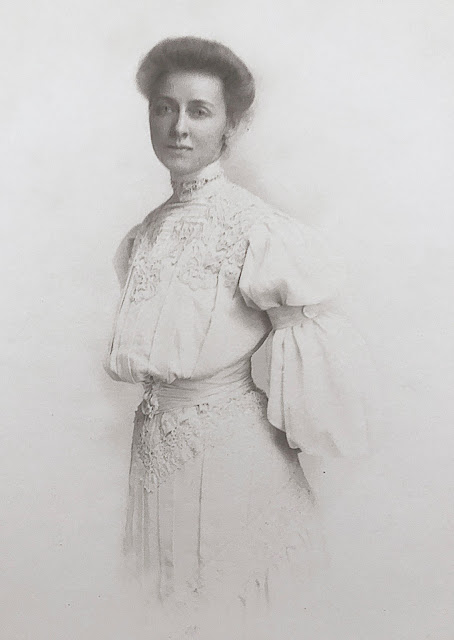 She decided to stay for a while to live with her sister, who got her a job at the Pratt. Marcia worked cataloging books and caught the attention of the head of the Pratt who recommended her to his friend, Dr. William Osler who was looking to hire a librarian. 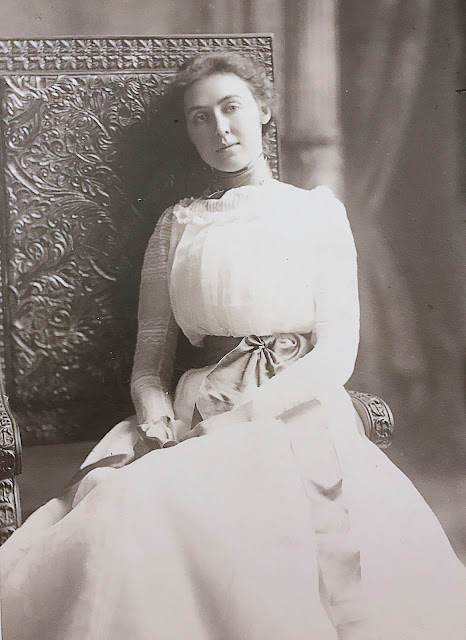 Dr. Osler was a charismatic physician but he could be very intimidating on first glance. He had arrived in Baltimore in 1888 to help establish the medical school at Johns Hopkins and was now the President of the Medical & Chirurgical Faculty of Maryland, where we are now.
Marcia was 27 years old, and although she knew libraries, she had no background in medicine. But she was willing to learn, and to move into the building where the Faculty was located, just a few blocks from here. Her job as the librarian required her to be on call 24/7. 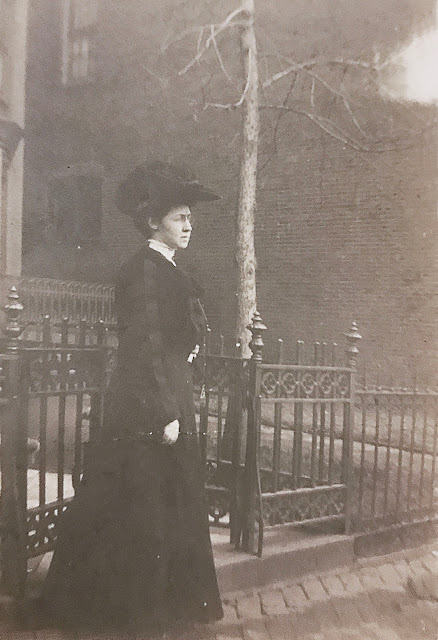 A physician could call at any hour of the day or night and request a book. Perhaps his patient’s eye had fallen out, and he needed to understand how to put it back in. He would call Marcia and request the book, she would go into the library and find it. Soon after, the physician would arrive, read through the book and be on his way. She was our early version of Google.
Soon after Marcia started work as the librarian, her duties began to expand. This was mainly because she was the type of person who would see something that needed to be done, and then she’d do it. Her role gradually became what she wanted it to become. 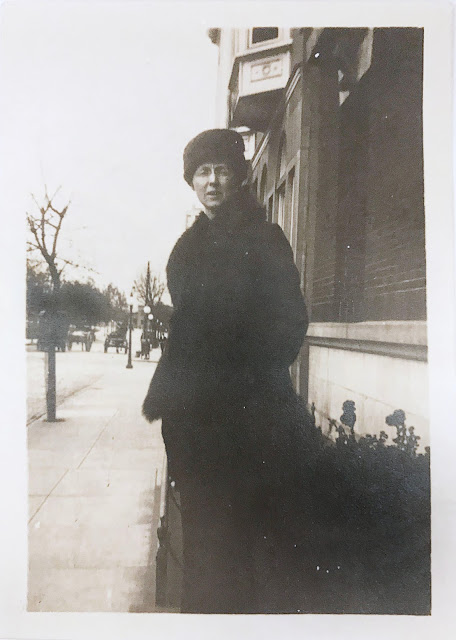 Miss Noyes had a lot to overcome to be successful at her position. While she had Dr. Osler in her corner, she was a young woman with no medical background. Close to 100% of the members of the Faculty were men, and older, well-educated ones at that.  Some of the physicians, especially the elder ones, viewed her with disdain. But she was a quick learner, and attended nearly every one of the Faculty’s events, learning the names of the members, and asking the wealthier ones for their financial assistance.
In 1904, when the Faculty re-organized to fit in with the American Medical Association’s guidelines for medical societies, Marcia became the Executive Secretary. And she basically did all of this by herself. She had one helper, a man from Haiti who was called Mr. Caution, and he was the custodian/porter/man of all trades. She also was able to hire two of her friends at the grand sum of $.25 per hour to help in the evenings. Her salary was $200/year, but she also had the use of an apartment on the premises.
She was in charge of every aspect of the organization, in addition to other activities she participated in. For example, along with Dr. Osler and two other librarians, she founded the Medical Library Association in 1898. This organization is still vibrant and active today, and its highest award is named after Marcia. In addition, she took off for the summers, something which was common at the time, and ran a summer camp for girls in the Adirondack Mountains in upstate New York.
Of course, you might ask how she got there, and the answer is by car! By the mid 1910’s, Marcia had purchased a little car, called a Doctor’s Coupe. 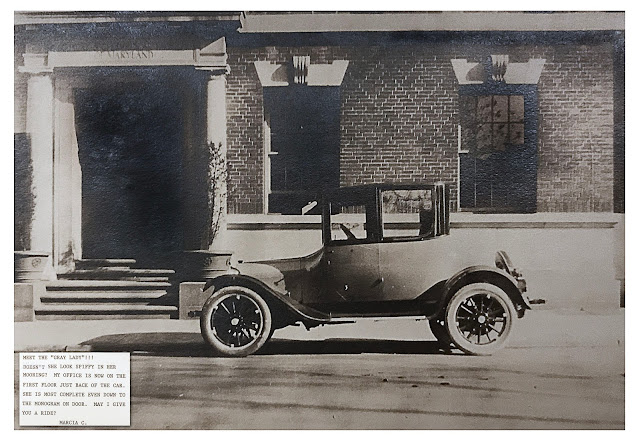 Driving licenses were only introduced in 1910, but women were in the vast minority at that time. They didn’t even get to vote until 1920! In the pictures of her car, Marcia calls her the Gray Lady and explains that her initials are on the door.


In 1909, it became apparent that the Faculty had outgrown their building and Marcia was tasked with being basically the project manager for the new building, where we are now. This was very unusual for a woman, and there are contemporaneous notes that indicate that she was working with the architects on the building’s design. And since she would be living here, she wanted her apartment to be exactly the way she wanted it.
The building was completed in less than a year, and Marcia’s close friend, Dr. William Osler, who was now living in England and had been knighted by the King, came back to Baltimore to help dedicate it and attend a whirl of parties. Over the next ten years, she traveled on an ocean liner to visit Sir William and his wife, Lady Grace Osler in Oxford, several times. 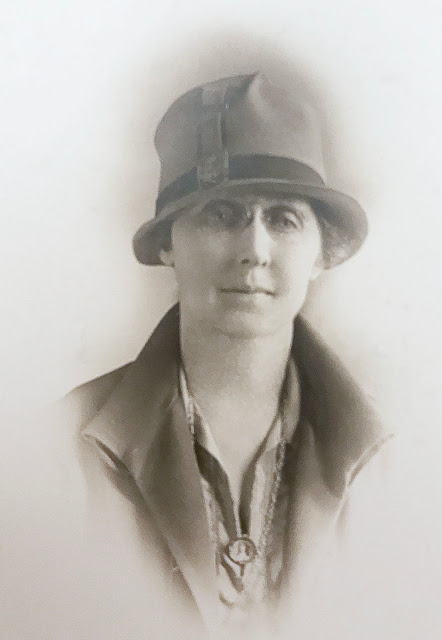 Over the next years, Marcia continued to grow and expand the membership at the Faculty. She worked with members on numerous initiatives including persuading the legislature to adopt a state-wide medical examiner’s office, rather than the more common county coroner one. She helped facilitate the quarterly House of Delegates meetings held in the far reaches of the state. She solicited donations from members and used them to buy more books for the library, which at its peak, numbered more than 65,000 books. Marcia also created a museum at the Faculty building, securing donations of antique and rare medical instruments, as well as a number of the valuable paintings which are now in our collection.
Marcia was beloved by everyone who worked for her. She was unassuming and light-hearted, and gave her assistants the credit when things went right and took the blame when they went wrong. When she retired, the newest employee had been working for her for 14 years, and Mr. Caution whom she hired upon her arrival in 1896, outlasted her at the Faculty by three years.
For the first 70 years of its existence, the library led an uncertain life, with it closing for months at a time, having only outdated and mildewed books, and keeping the books in a complete disorder. By the time she retired after 50 years, there was more than $90,000 in the bank, and the medical library was one of the best in the country. It held the medical journals from every state and every year, as well as numerous rare and valuable books.
In 1934, Marcia was elected as the first non-medical president of the Medical Library Association. For many years, she had organized their book exchange program, as well as editing their quarterly journal.
When Marcia retired in 1946, she planned to write the history of the Medical Library Association but she was in ill-health and was not able to. The members planned a big party for her retirement in November, but when her health continued to decline, they moved it forward to April. 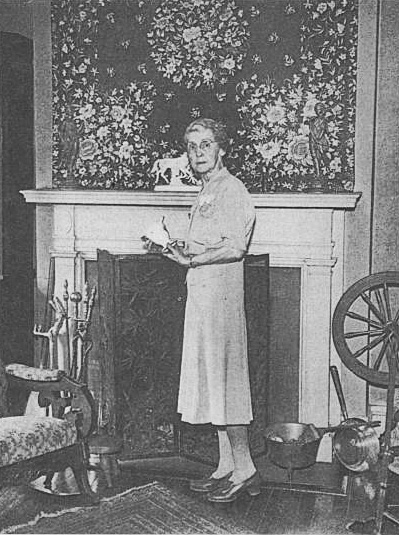 We do not know the date on which Marcia was born, probably sometime in December of 1869, but we do know that she died on November 27, 1946. She wanted to have her funeral at home. Here at the Faculty, which was literally, her home. So, for the first time in its 116 year history, a funeral was held at the Faculty for its beloved Marcia Crocker Noyes.
At her funeral, one of her close friends, the physician Dr. J. Albert Chatard said of her…
Miss Noyes created a created a reality of the hopes and dreams Dr. Osler formulated while he was at Hopkins… On this foundation, she worked constantly to create an atmosphere both effective and genial, so that people would like to come to the building… and would feel that interesting and important things were going on under its roof.
Posted by Meg at Wednesday, March 04, 2020 1 comment: