Upton Scott was born in County Antrim in Ireland in 1722 and received his medical training in Glasgow, Scotland. He arrived in Annapolis in 1853 with Horatio Sharpe, the last Royal Governor of Maryland, as his personal physician. This position helped him obtain a large practice, and he became known as the “Court Physician” of the capital. 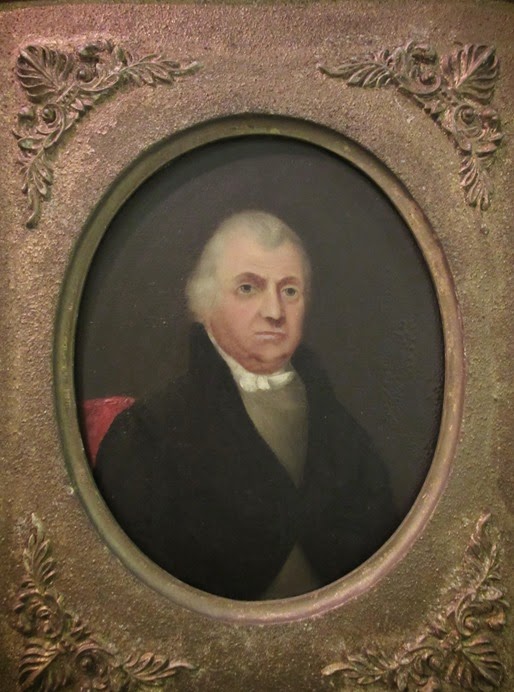 In 1760, Elizabeth Ross, became his bride, and he built a stately house in Annapolis, Maryland, on the north shore of what is now Spa Creek. 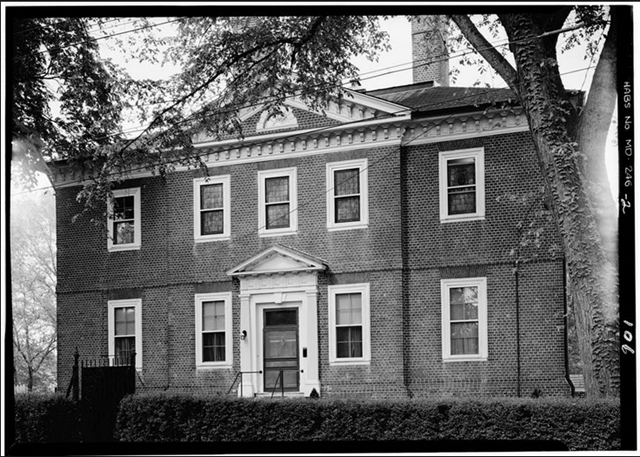 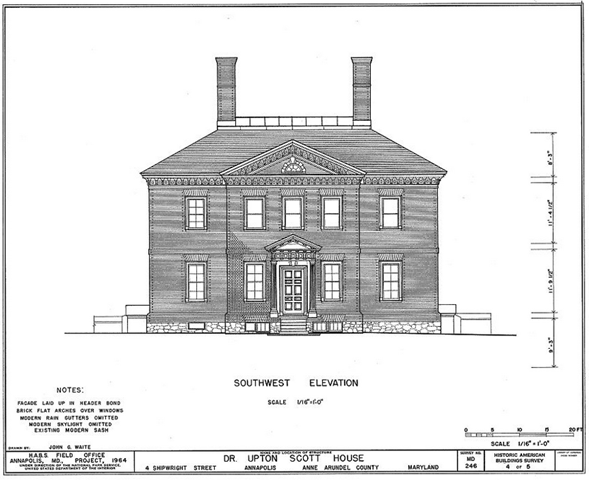 The house itself has an interesting history. 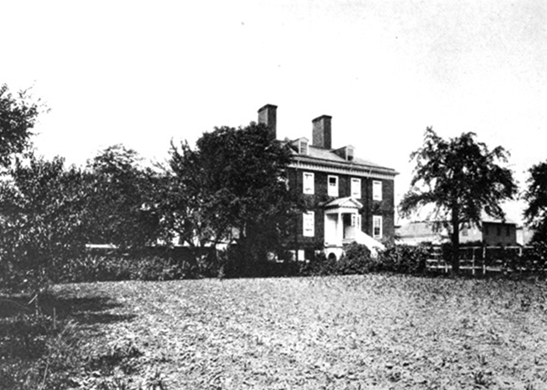 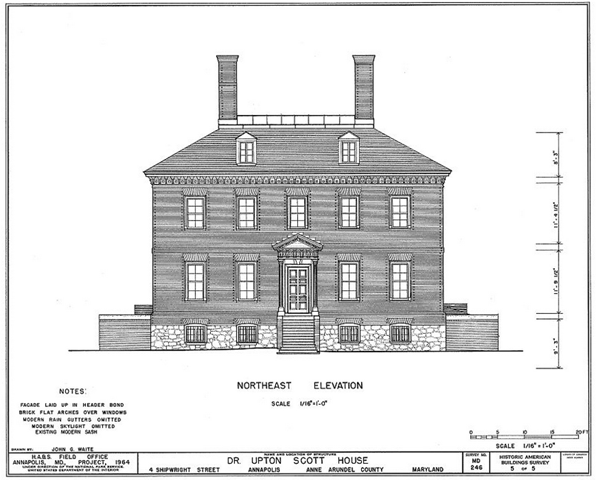 Dr. Scott built it and when he died, it passed through the family and was then was sold. After the buyers died, the house and adjacent properties were the object of some dispute. 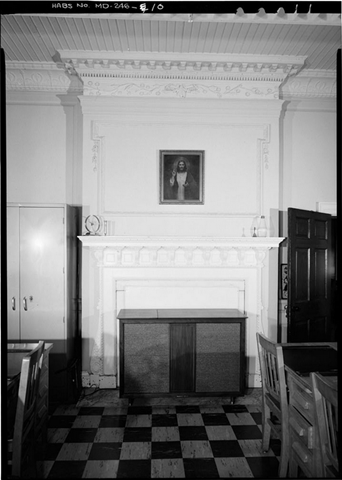 Plumbing and electricity were routed to the house, but the pipes were channeled into the plaster walls and pipes to the second floor were fully exposed on the first floor, below. 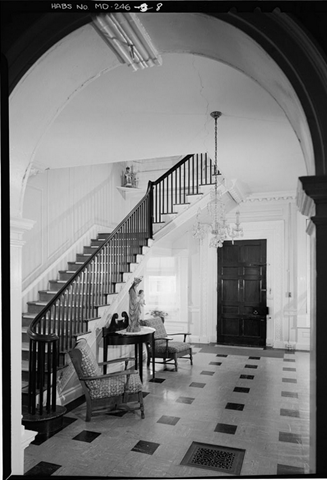 They put in a central heating system which ran ducts through the chimneys, closing off the fireplaces. The marble surrounding the fireplaces was painted over. 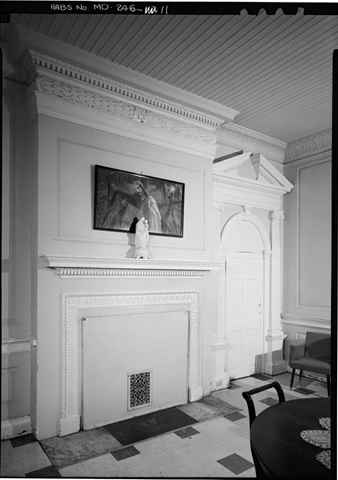 The School Sisters of Notre Dame transferred the Upton Scott House to the Most Reverend Lawrence Shehan, Archbishop of Baltimore, in 1962. The house was sold to Mr. And Mrs. Coleman duPont in 1968, who restored it to its original glory. It was then purchased by Mr. and Mrs. Paul Christian, who commissioned an extensive report on its history and gardens.

Back to Dr. Scott… He was a Tory, one who supported the British in their fight against the young America, and sat out the American Revolution in Ireland, but returned to Annapolis when it was over.

At the age of 76, in 1799, Scott joined other Maryland physicians in founding the Medical and Chirurgical Faculty of the State of Maryland and served as the organization's first president. 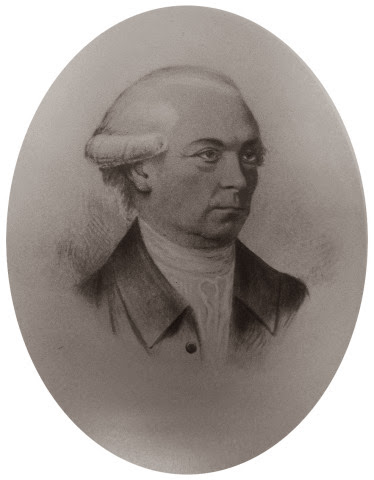 In addition to his many other varied activities, Upton Scott was a devoted and knowledgeable gardener, with a greenhouse and extensive gardens at his home.

Dr. Scott’s nephew-by-marriage was Francis Scott Key, who stayed with the doctor while attending St. John’s College in Annapolis. Key attended St. John’s for more than seven years, and all evidence indicates that he spent all of that time with the Scotts. 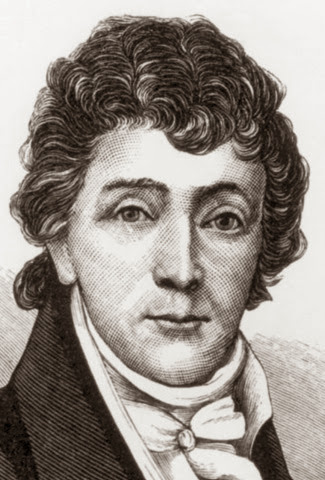 Dr. Scott died at age 90, and was buried at St. Ann’s Church in Annapolis, MD on Wednesday, 23 February 1814, the same year his nephew penned the National Anthem, just two months after celebrating his ninetieth birthday. 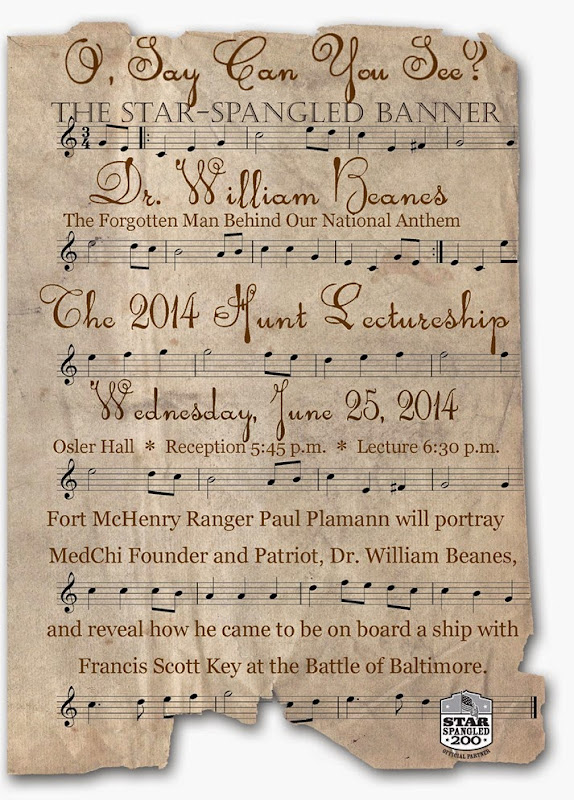 Dr. Beanes is the forgotten man behind our National Anthem, which celebrates its 200th anniversary in September. Dr. Beanes, a country physician in Southern Maryland, was taken captive by the British Army and Francis Scott Key was dispatched to negotiate for his release. While doing so, the Battle of Baltimore began, and Fort McHenry was bombed for more than 25 hours.

When the smoke cleared, Key and Beanes could see the massive flag flying over Fort McHenry, and knew that the Fort had not fallen and Baltimore was safe. Francis Scott Key was moved to write the verses which became our national anthem – the Star-Spangled Banner.

Ranger Plamann has portrayed Dr. Beanes for more than 25 years and intimately knows the story of Dr. Beanes’ early life on his family’s estate in Upper Marlborough in Prince George’s County, his help in the founding of MedChi in 1799 and the early years of medicine in Maryland, and his role in the War of 1812’s Battle of Baltimore.

The Fifth Annual Hunt Lectureship will begin with a reception at 5:45 p.m. and the lecture will begin at 6:30 p.m. with the singing of the National Anthem. Tickets are free, but reservations are required. Please e-mail events@medchi.org, or call 410-539-0872, ext. 3336.

I was scanning the 1811 Censors report for Vaccines and came across the most amazing line ever!

In case you can’t decipher it, the piece reads:

There were some cases of mania and melancholia, one in December of Chorea St Vitis in a lady who endeavored, during the paroxysm, to bite her physician. He gave her a smart box on the side of her head which instantly secured decorum. Her hair was cut off, and by cold applications to her head she was speedily relieved.

This was a typical English punishment for someone being bad, and is referenced in Alice in Wonderland and Wuthering Heights. 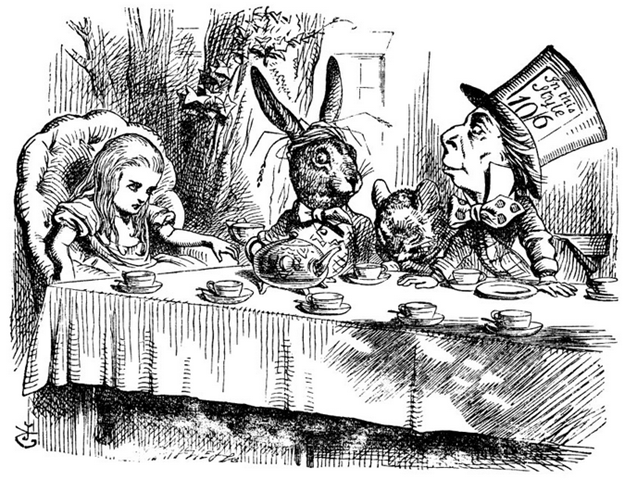 Off with her head!

MedChi celebrated its 100th anniversary in April of 1899 with a series of dinners, lectures, and other events. As I have been looking through our archives, I’ve found several invitations, menus and ribbons that all commemorate this special events. 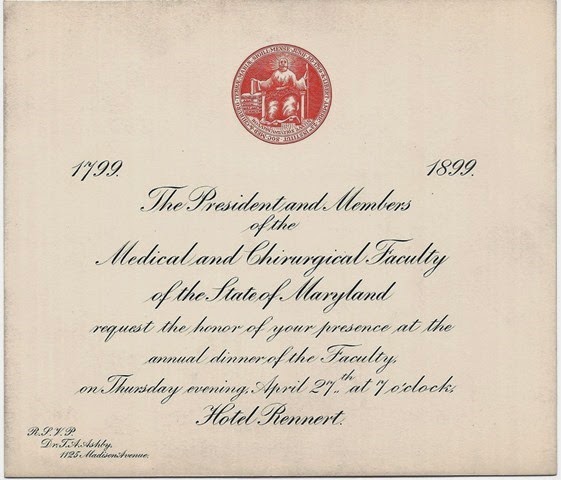 This invitation is to the opening of the Centennial Anniversary. McCoy Hall was at the Hopkins University campus and is now a freshman dorm. 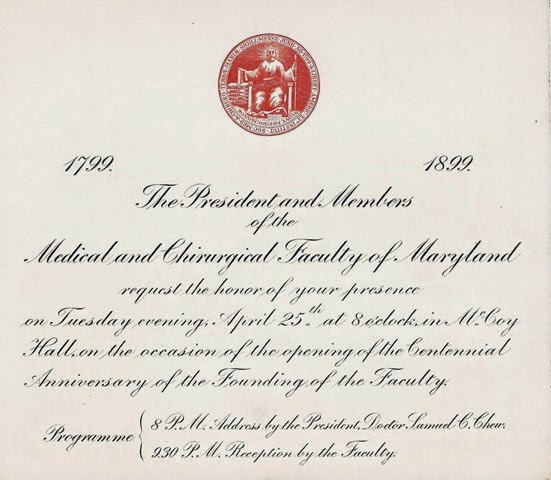 Lectures and oratories were huge during this time, and the arrival of Dr. Keen from Philadelphia was big. 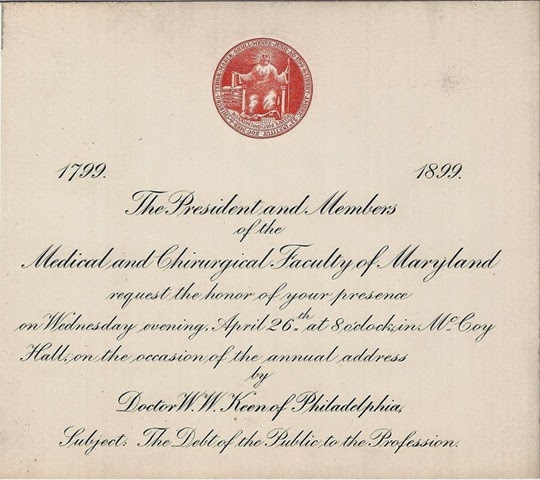 It always fascinates me to think of what MedChi’s printing bills were throughout our history! We printed programs, books, booklets, notebooks, and everything else! I love the gold and black ribbon on this program, still in great shape 115 years later. The colors on this program reflect the colors in the Maryland flag. 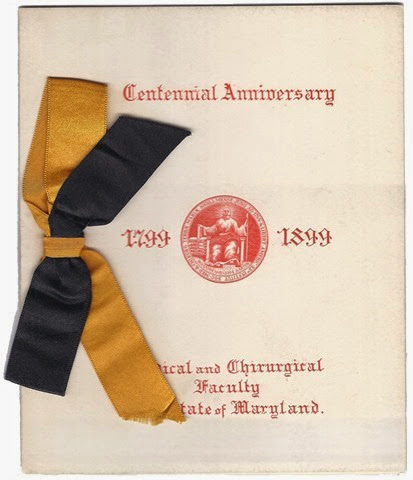 Every menu I’ve found in the archives starts with celery and olives, but this one’s got almonds, too! Today, this would be quite an elegant and unusual menu, but at that time, it was more commonplace. Very seafood heavy menu and no meat at all, which is interesting. And they didn’t skimp on the drinks with dinner! 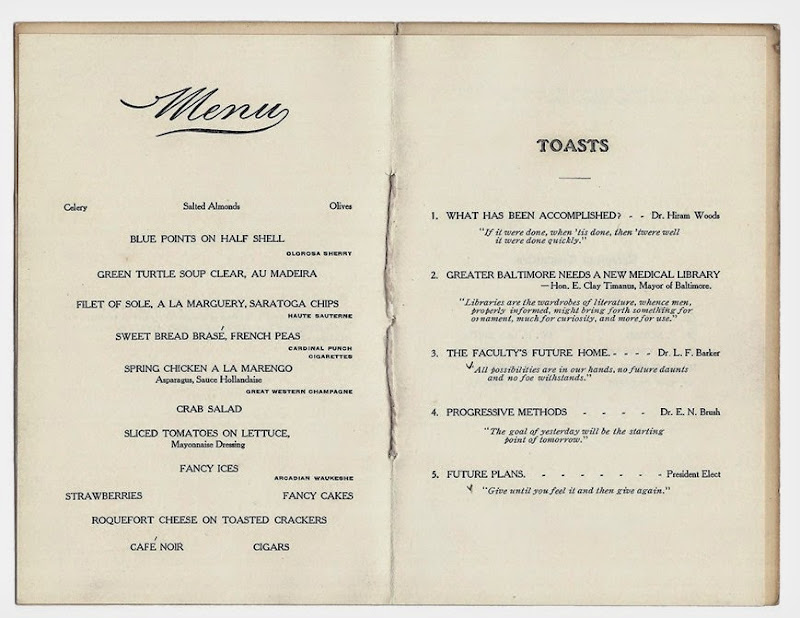 This is the special MMJ that came out in time for the Centennial celebrations. It’s hard to count the number of fonts on the cover! 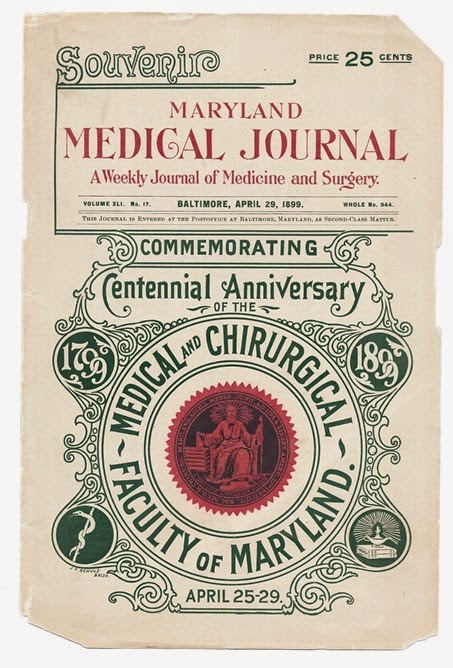 And there are ribbons! I found these two recently, but don’t really have any idea of what they would have been attached to. The gold one is so interesting – it looks like they started printing Baltimore in one font and then ran out of letters and had to finish it in another font.

Both of these feel and look like they’re silk satin.

For several months, MedChi has been working with the team at Star-Spangled 200, the official organization of the celebrations of the 200th Anniversary of the writing of the Star-Spangled Banner, our National Anthem and now we have been named as one of their official partners. 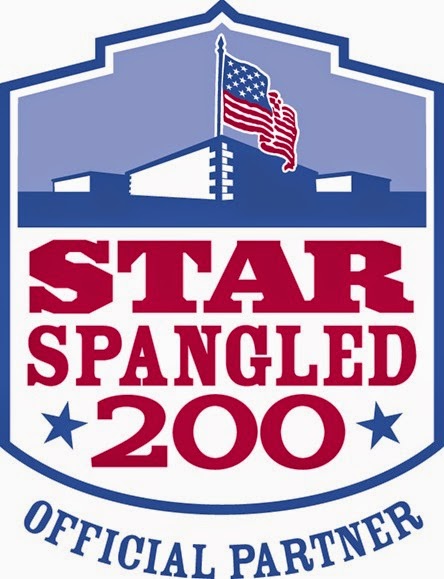 Over the next several months, we will be presenting a lecture and an exhibition featuring MedChi’s role in the writing of the anthem. I’ve already written about Dr. William Beanes, the forgotten man behind the National Anthem, here, but there are nearly 30 other physicians who were active and involved in the War of 1812 and the battles that were fought locally. We will be highlighting a number of them here on the MedChi Archives blog as we move closer to September.

Star-Spangled 200 is planning a summer filled with great events to celebrate the Anthem, so bookmark their site to see what’s going on. The events culminate with a big weekend celebration for Defenders Day, the weekend of September 12-14, 2014.

In 1814, MedChi’s physicians were present at Fort McHenry during the 25 hour Battle of Baltimore, although more deaths came from disease than injury. 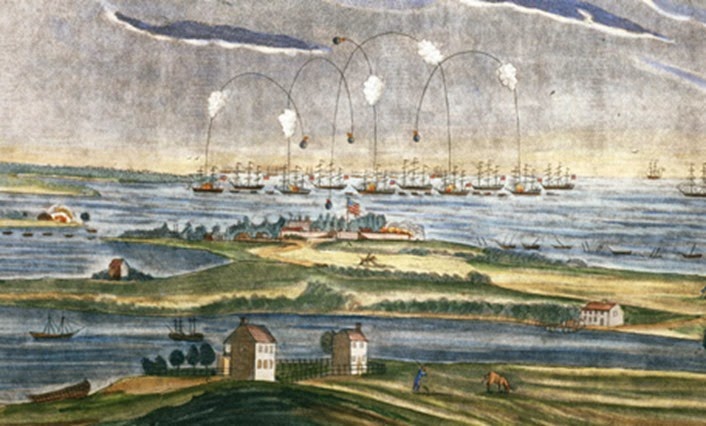 In September, our physicians will be assisting at events surrounding the celebrations at Fort McHenry. We look at this as closing a loop that was started 200 years ago.

MedChi is very proud and tremendously honored to be an official partner in the celebration of our nation’s National Anthem.

I am sorting through all most some of our archives, scanning images at super high resolution and came across this great sketch of our 1211 building. 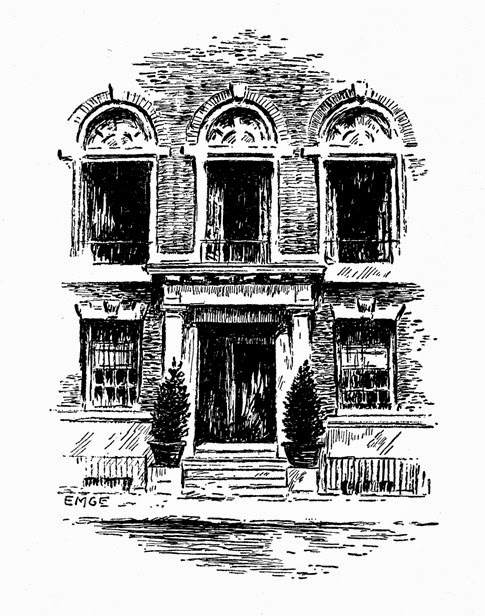 I love how the French doors on the second floor reading room are thrown open to the breezes. Also the great conifers in pots on the front steps. If you look carefully, you can see the artist sketched the different styles of brickwork – Flemish diagonal on the ground floor, and the vertical Monk’s bond on the second floor.

One of the interesting things about this building is that the front is on an angle. Cathedral Street, on which we front, is angled and thus, the building had to be built to conform to the street front.

When you’re in any of the front rooms, you don’t see that the room is angled, but when you look back into the building, you see that the hallways are set at an angle to the front. 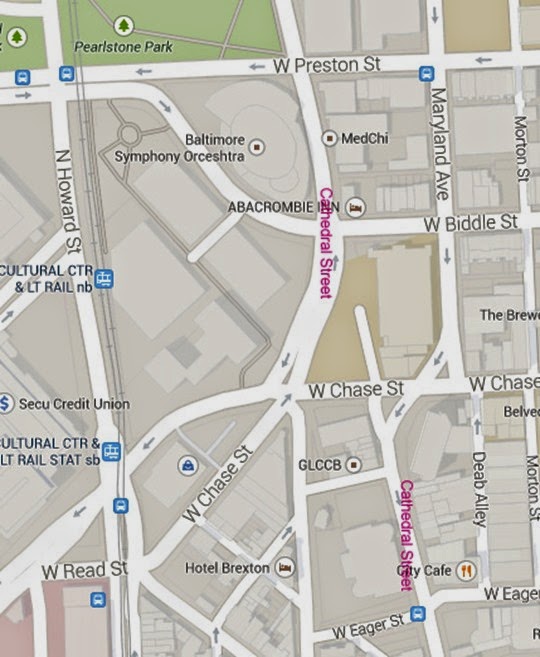 You can see where Cathedral Street originally was a through street, but at some point, a small park was made, and so it no longer goes through, northbound, to Mount Royal Avenue. It can really confuse people.