I was looking for a turn of the century (the last one) map of Baltimore and stumbled across a map I’d never seen. It’s not actually a map, rather a bird’s eye view of the city, several years after the Great Baltimore Fire in 1904, highlighting what had been accomplished in a scant seven years.

The view comes from somewhere high above South Baltimore, and stretches all the way up past the mills on the Jones Falls in Hampden and Woodberry. The map is phenomenally detailed, with many buildings being clearly identifiable, even 100+ years later. 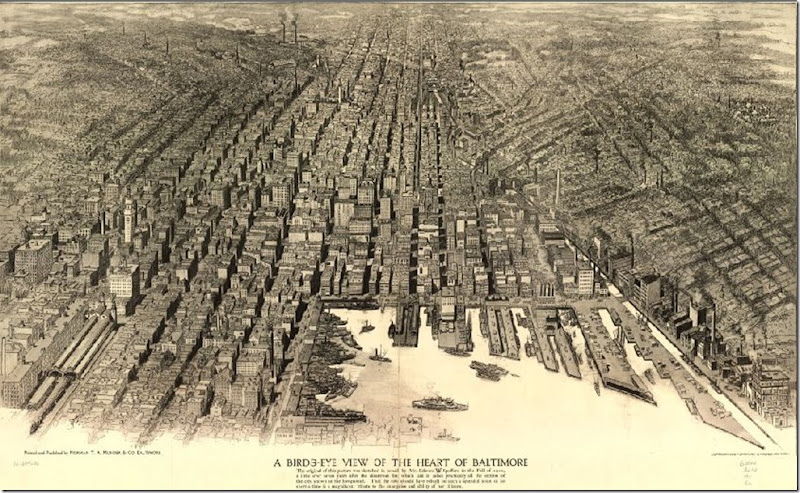 You can easily see the Washington Monument, 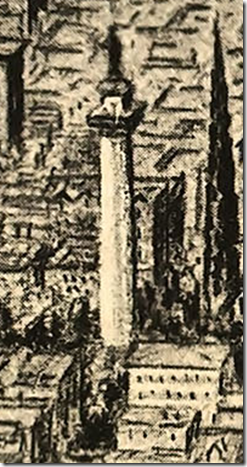 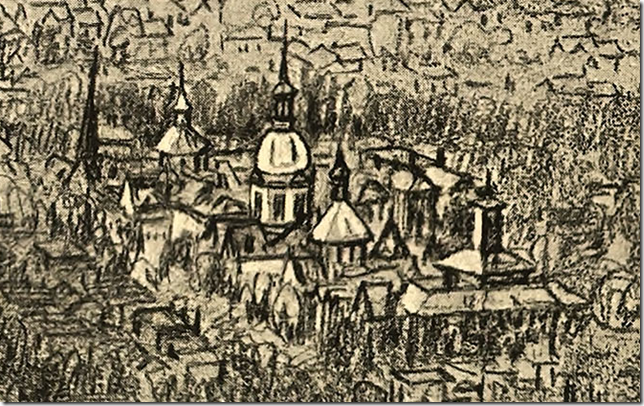 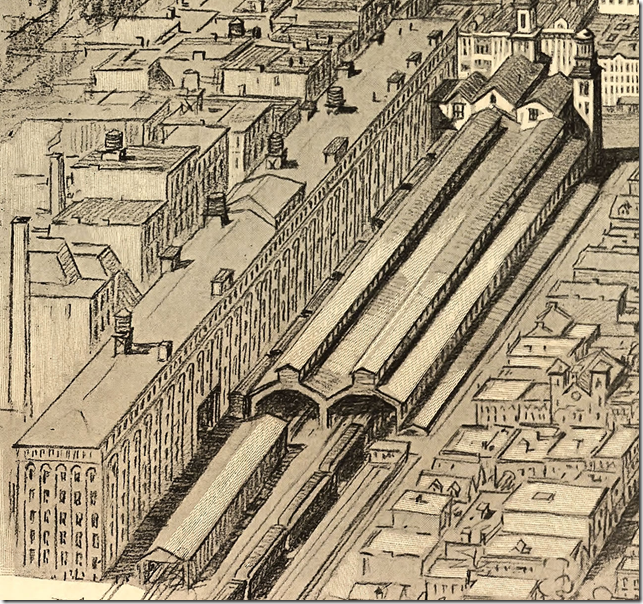 Davidge Hall and the Bromo Tower,

and so much more. I am pretty certain we could probably pinpoint the MedChi 1909 Building, but I haven’t been able to locate it yet.

Of course, I can’t leave well enough alone, so I applied my mad Photoshop skills to it while listening to the convention speeches, and colourized the map, mostly with brick red, copper and forest green and some pale blue, although we all know perfectly well that the Harbour and the Jones Falls never looked like that. I think that the colour gives the piece a lot of depth. 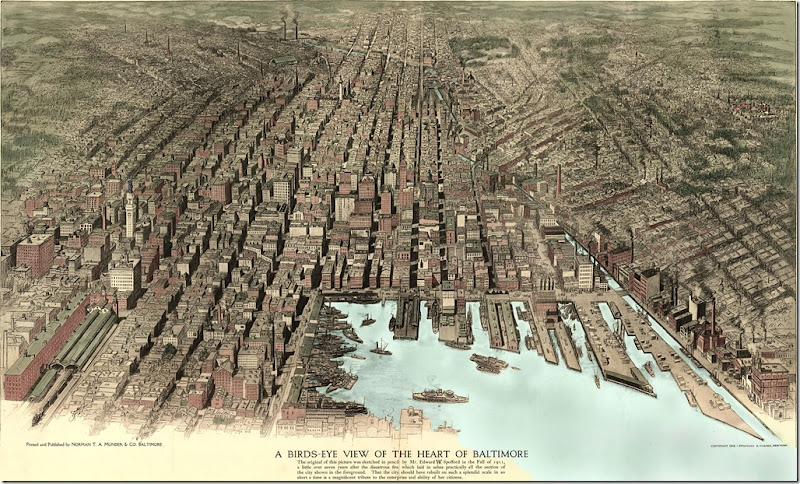 Although it’s not quite to scale, it’s a pretty amazing piece of work, originally done in pencil by Mr. Edward Spofford in the fall of 1911. There’s not a lot of information about this piece, like who comissioned it, and how it was sketched.

You can download a huge file of the map from the Library of Congress, here. It’s such fun to sit and search the image and see what you can recognize.

Email ThisBlogThis!Share to TwitterShare to FacebookShare to Pinterest
Labels: Ephemera

MedChi hosted our first ‘pop-up” lecture on July 13th, and it was a stellar success! More than 150 people registered for the event, and we were still receiving requests for tickets up until 15 minutes before it started! Osler Hall was filled with members of the public who are clearly happy to be attending the lecture. 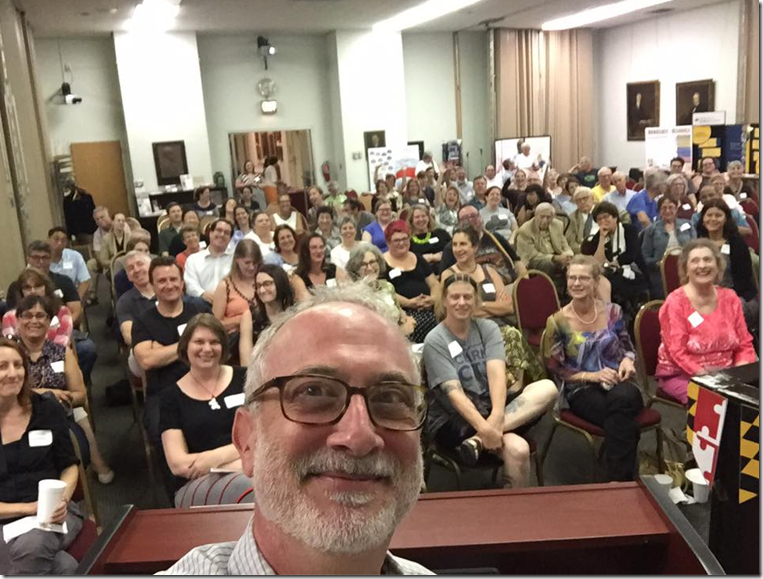 And our speaker, Bruce Goldfarb, front and center in this selfie, was a huge hit with his detailed lecture on the Nutshells and their creator, Frances Glessner Lee. After he finished the lecture, Bruce entertained questions from the crowd, and afterwards crowded around to ask even more questions.

Because of the popularity of this lecture, we discussed presenting it again in the spring.

We are already planning to do a lecture around Halloween, and I bet you might be able to guess who and what it will be about!

In the course of preparing for next week’s lecture on the Nutshells, I found out that Russell Fisher’s grand-daughter will be here for the lecture. She’s preparing a documentary on him and is looking for anyone who was a contemporary of Dr. Fisher’s who might be willing to talk to her. 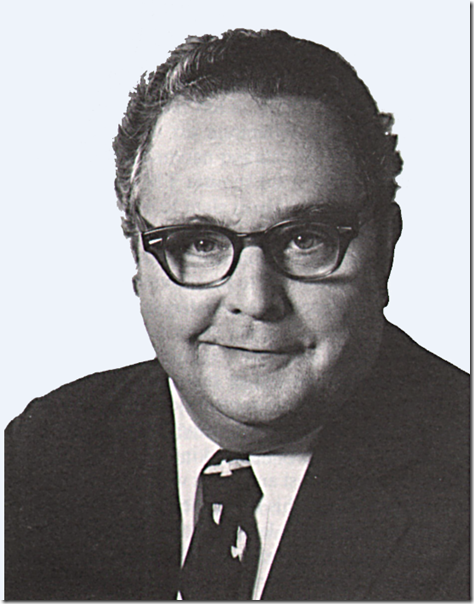 Dr. Fisher was generally thought of as the father of forensic pathology and did a tremendous amount to professionalize the field. He was active in MedChi and was President in 1969. We have a lot of information that he’s written, or that was written about him, but personal stories add a lot of depth.

Please email me here and let me know if you’d be willing to speak to Dr. Fisher’s grand-daughter.

I am going through all sorts of old files in order to cull those that are important, and chuck out those that have no relevance (like the one on painting the interior of the building).

The files contain all sorts of correspondence, some pieces more interesting than others. I came across this letter from the editor of the Baltimore Sun, dated sometime last century, and thought it was equally funny and horrifying! 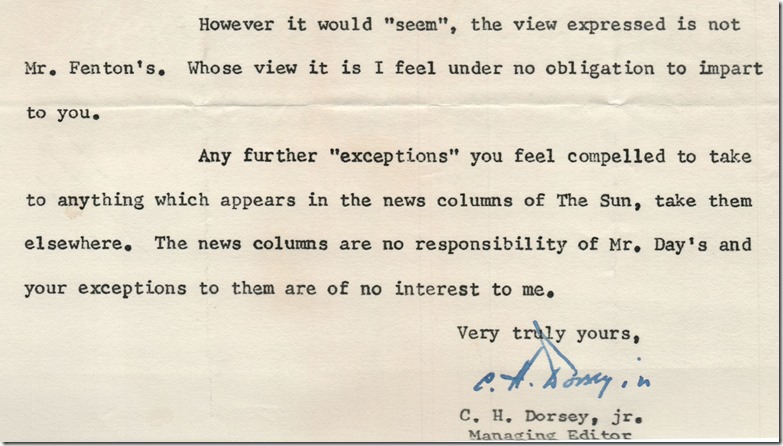 It is pretty impossible to think that a contemporary editor would ever send a letter or email like this to a reader.

Marcia, along with the staff and Board of MedChi and the Center for a Healthy Maryland,
wishes you a safe and happy Independence Day. 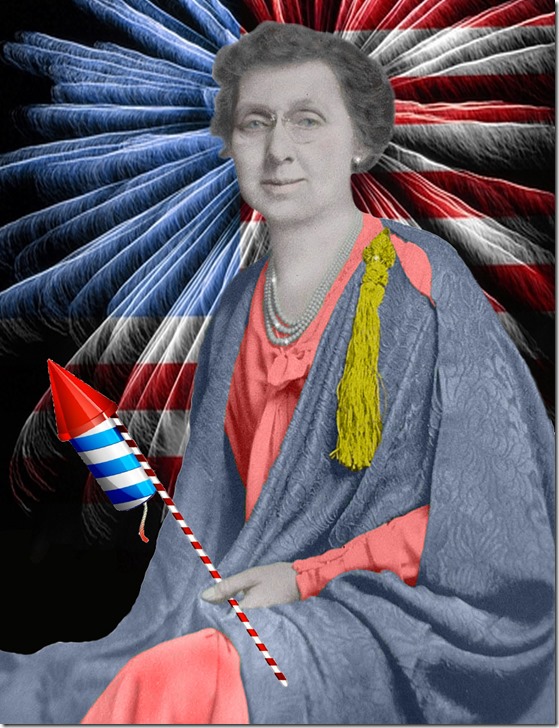