This building is three stories high and five bays wide. Above the stone basement, the building is essentially masonry laid in several different bonds. After a row of stretchers in straight bond, the first story is laid in Flemish diagonal bond (1). In the second and third stories, the areas around the windows are laid in Flemish double stretcher (2). The piers, the frieze, and the parapet are laid in running bond (3).

In the first story, four marble stairs flanked by blocks, each surmounted by a scroll and ball, lead to a double door with a rectangular transom (4). This is contained within a shallow portico consisting of two unfluted columns with truncated caps and thin abaci supporting an entablature with a braced cornice(5). To either side of this are two double hung, eight-over-eight windows with splayed, flat-arched stone lintels having large brackets as keystone(6). A stone belt course serves as the sill (7).

Above the first story windows is a wide, projecting stone belt course(8). The three inner bay windows of the second story (French with sixteen lights, fanlight transoms set in keystoned stilted around arch-lintels of straight bond) rest on this belt course(9). Between these windows runs another stone belt course which is flush with the façade (10). This forms the sill for the two outer bay windows of the second story(11). These windows are double hung, six-over-six with splayed, flat-arched stone lintels which have keystones.(12) 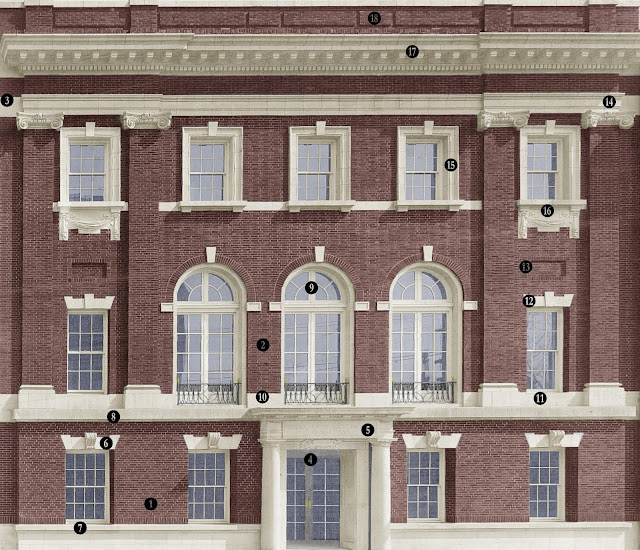 Between second and third story outer bay windows are two rectangular niches emphasized by headers laid in straight bond(13). Outer bay windows are flanked by flat brick piers which rise from stone bases atop the projecting belt course above the first story windows, and terminate in stone composite capitals which appear at the lower edge of a blank stone frieze located just above the third story windows(14).

Third story windows are all double hung, six-over-six with moulded stone framing, flat-arched and keystoned at the top, resting upon a braced sill(15). In the outer bay windows, a swag relief appears beneath the sill(16).

Appearing above the aforementioned blank stone frieze is a row of dentils, immediately above which appears the moulded, braced roof cornice(17). The cornice supports a brick parapet topped with stone(18).

This building is three stories high and three bays wide. It is laid in common bond, and has a stone water table and details.
In the center of the façade’s first story, four steps flanked by stone blocks (1) lead to a double door with a one piece, round-arched transom overhead (2). This is contained within a beveled, stilted round arch which contains vertical anthemion bands (3) below the impost block and above, in the intrados of the arch. At the crown of the intrados is a cartouche flanked by palmettes (4). Between the transom and intrados is a band of rinceau moulding (5). Beneath, the extended portions of the impost blocks are puti heads (6). At the crown of the arch, above the cartouche, is a bracket which serves as a keystone (7). The extrados are filled with egg-and-dart moulding(8).
To either side of the entrance, the basement is pierced by two casement windows, each containing one light (9).
First story windows are arranged in two pairs. They are double hung with stone sills and moulded, flat-arched frames which contain terra cotta tiles with foliate motifs (10). The surface of the first story façade achieves a rusticated effect through deep incisions in the masonry which occur at intervals of two feet (11). 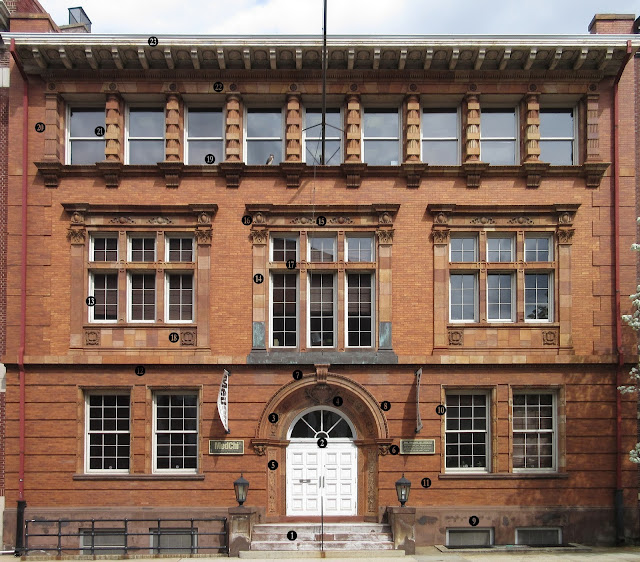 Between the first and second story windows is a stone belt course underscored by a strip of egg-and-dart moulding (12).
Second story windows are arranged in threes. These windows are all single hung with six lights, and have four-light transoms overhead (13). The window groups are contained within a large, moulded cornice supported by flat pilasters with composite capitals (14). The frieze of the cornice contains two rondelles flanked by ribbons (15). At either end of the frieze is an egg moulding (16). The junctions of the muntins and mullions contain cruciform mouldings with inscribed squares (17). In the outer window groups, a tablet bearing a wreath surround an open book appears beneath either outer window (18).
Third story windows are double hung 1/1, and have a common flat-arched lintel and sill (19). A flat, rusticated, fluted pilaster appears at either end of the window group (20), while in between bays, fluted, rusticated colonnettes resting on projecting, bracketed, cornice-like dados, support the lintel (21). Above the pilaster and colonnettes are rondelles (22).
The braced roof cornice is coffered between the braces (23).

I was scanning the Morgan Library's fabulous Instagram feed when I saw something that stopped me in my tracks. The photographer, Abelardo Morrell, who was at one time, a security guard at the Morgan, took pictures of all of the inside covers of Henry David Thoreau's journals. 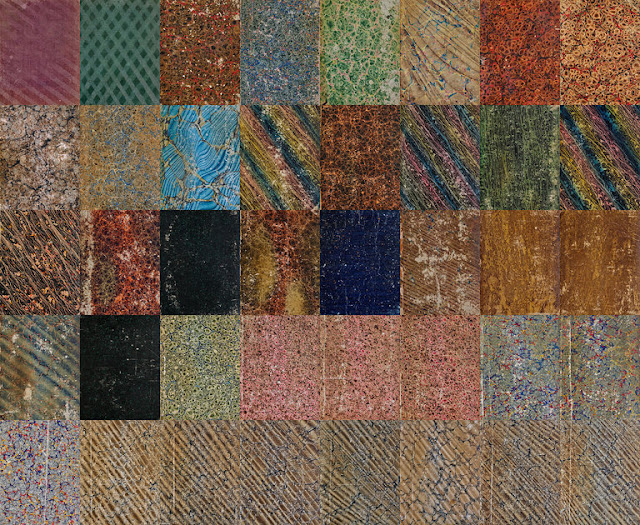 He put them in order from first to last to create a huge collage of the beautiful marbleized end papers.
You can read about the project in the New York Times, here. And here it is in place at the Morgan. 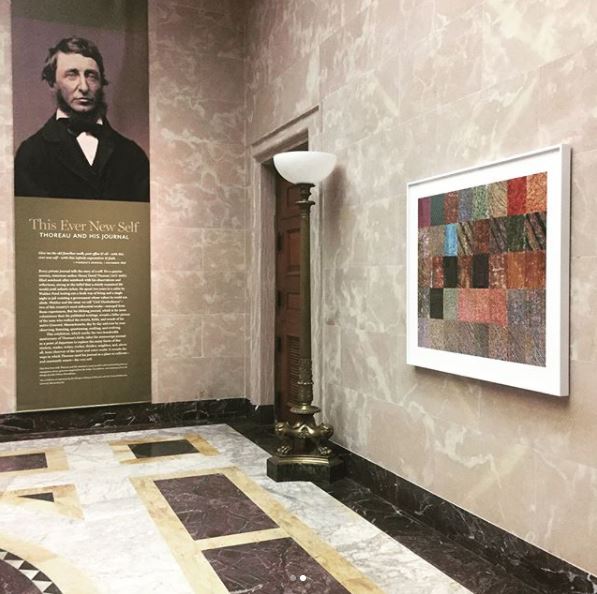 I thought it would be a fun idea to create a similar project for an item at our upcoming Silent Auction, in honor of the inauguration of Gary Pushkin, MD in October.

We have loads of books with marbleized end papers, so there's no shortage of patterns that we can use. 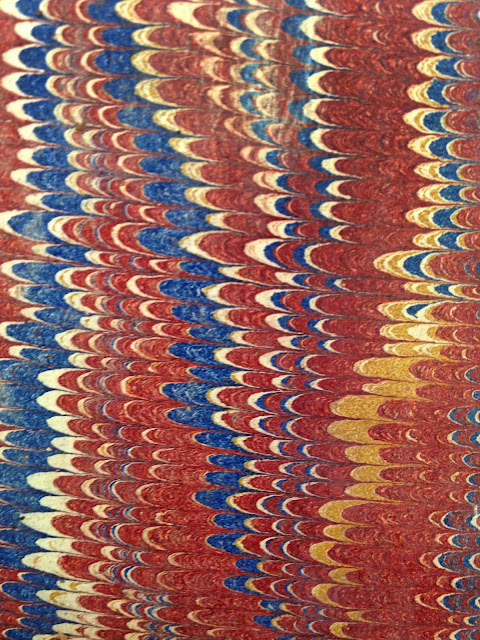 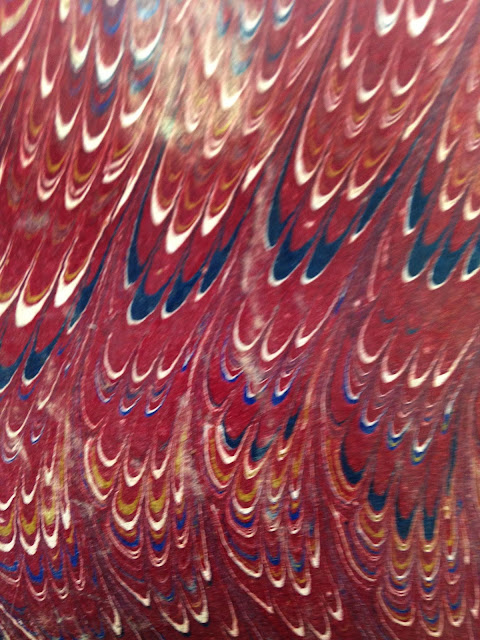 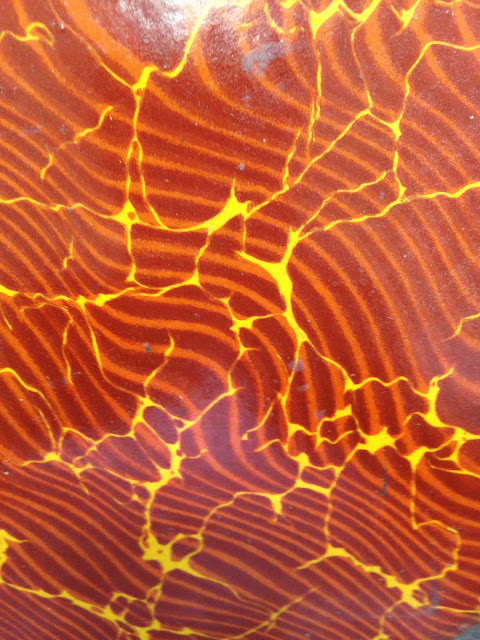 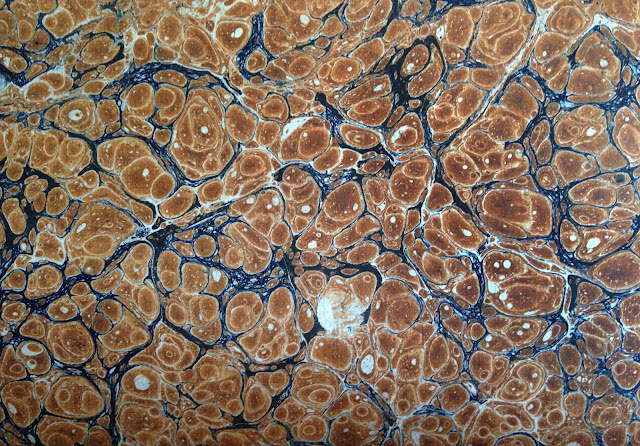 Stay tuned for the final project.
Posted by Meg at Friday, September 01, 2017 1 comment: