The Skylight is OPEN!

At the top of the main staircase at MedChi, there is a leaded glass skylight. Not that you'd ever have noticed it, because it's been covered up.

The skylight was on the original specs and plans for the building, which was dedicated in May of 1909. Since Marcia had her apartment at the top of the stairs on the fourth floor (far right), it would have lit up the whole area.

The skylight was originally covered during World War II, as many were during that period.


Blackout regulations were imposed on 1 September 1939, before the declaration of war. These required that all windows and doors should be covered at night with suitable material such as heavy curtains, cardboard or paint, to prevent the escape of any glimmer of light that might aid enemy aircraft.

Fast forward to this year. We are now using the apartment for offices, and the top of the staircase is lit by one light, which was not enough to chase away the gloom.

We investigated opening the skylight again and began working with a local roofer on the project. They needed to uncover the skylight, and fabricate a clear cover to protect the leaded glass. Because the skylight is inset into the roof, there needed to be a way for the water not to pond on the glass. And of course, we wanted to protect the 110-year old glass.

After making sure it wasn't going to rain (haha) and bringing in a massive boom crane (with an extension!), the cover arrived and was placed on the roof. 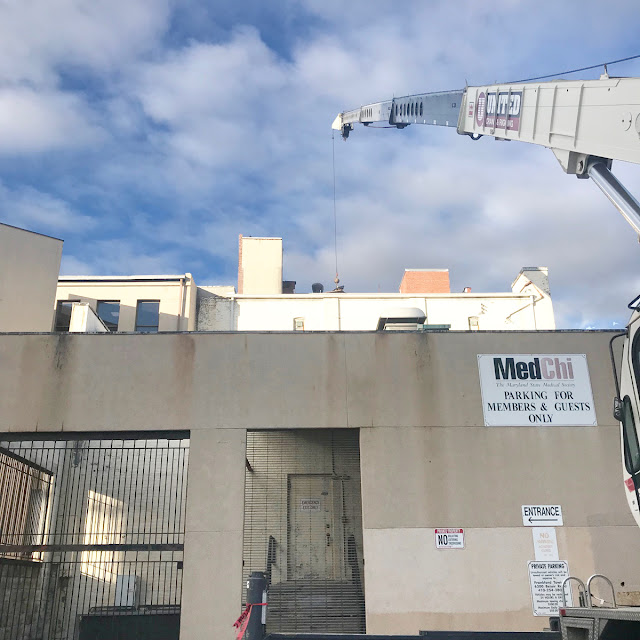 Once that was finished, the old cover was pulled off, the leaded glass skylight was cleaned and the new cover was installed. It was an all-day job!

But when it was finished and the sun shone through it, we knew it was worth every bit of effort! 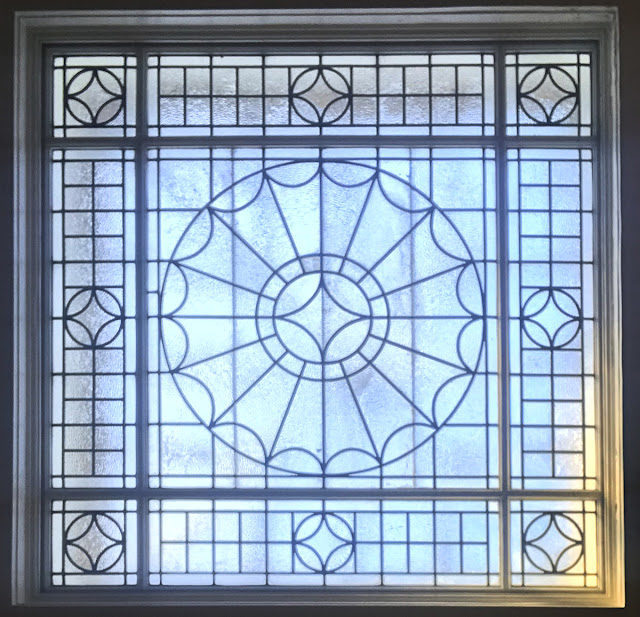 But of course, nothing's easy, is it? Once the top of the staircase was lit up with natural light, we realized that we needed to paint the walls (they are pink!) and also the stairs themselves. The darkness of the staircase hid a lot. But once we've accomplished the painting, it will be beautiful once again. We hope that this makes Marcia happy!
Posted by Meg at Thursday, November 29, 2018 1 comment:

Marcia and the entire MedChi family send their wishes for a warm and wonderful Thanksgiving to you and your family. 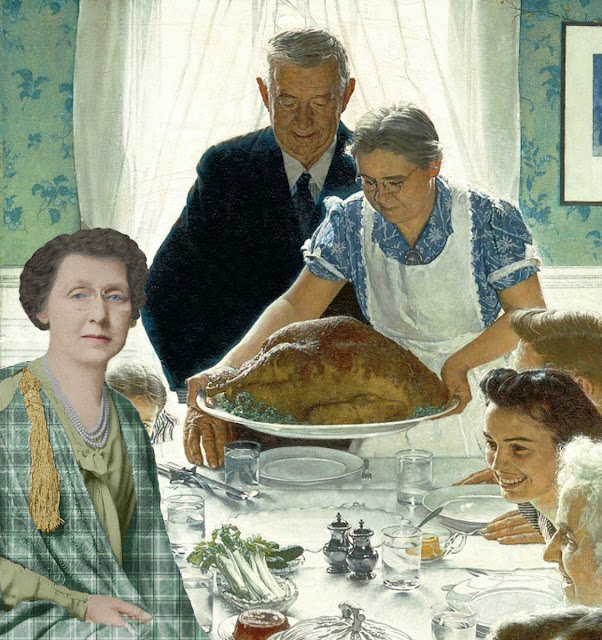 A Map of Johns Hopkins Hospital, Circa 1950

I was at a country auction this weekend and one of the items that came up for bid was an old "map" of Johns Hopkins Hospital by the cartoonist, Richard Q. "Moco" Yardley. The Moco comes from his old nickname, a play on Eskimo.

Yardley drew a number of these fun maps. I know of ones for Baltimore County, the Eastern Shore, Anne Arundel County, and of course, Baltimore City, which was done for the Orioles. Yardley was the Sun's cartoonist from 1939 to 1969 and did mostly editorial cartoons. 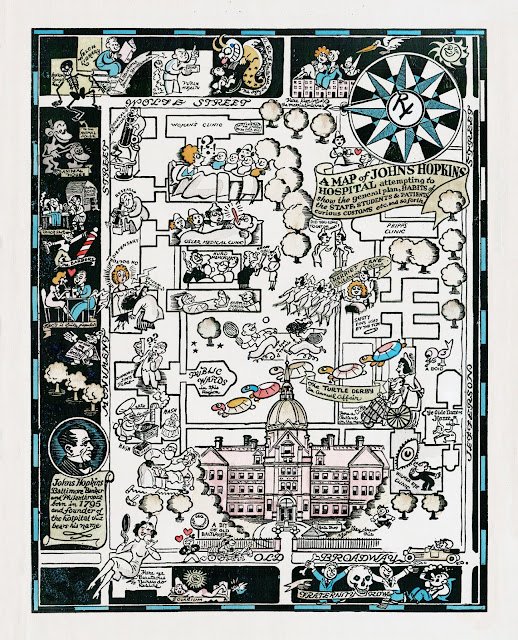 Yardley's maps are very detailed and have a lot of little "inside" jokes in them. Readers must remember that they were drawn in the 1950's and things that were common then, can be offensive to some today. With that said, here's the map I found.


The map references Osler, Halsted and Walsh, but Kelly is missing. You can see the Phipps and Wilmer Clinics and the main building. And as in all of Yardley's cartoons, there is a little rendering of him, which looks nothing at all like he did in real life!
Posted by Meg at Tuesday, November 13, 2018 1 comment:

In honor of the 100th anniversary of the first Armistice Day, I wanted to share this bronze plaque with you. 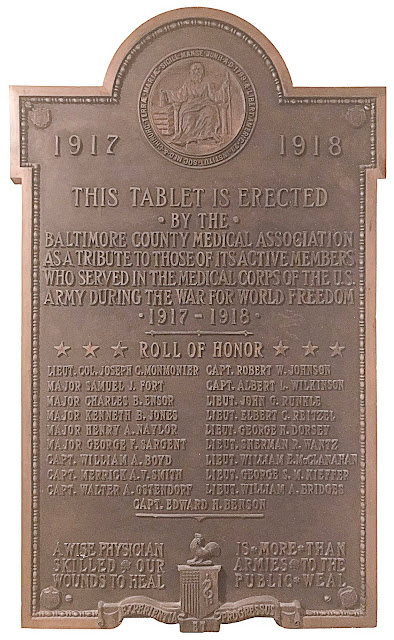 This large bronze tablet was given by the Baltimore County Medical Association sometime in 1919 and was installed in the then-ten year old building as a memorial to the "great war."

In September, MedChi was pleased to host a group of School #49 alumni who gathered to celebrate the dedication of a bronze plaque which now graces the front of the building. 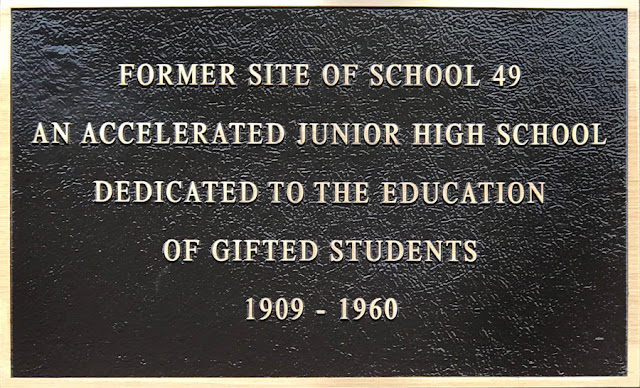 The event was spearheaded by Celeste Pushkin, mother of MedChi’s immediate past president, Dr. Gary Pushkin. She and a group of fellow “49ers” donated funds to install a bronze plaque on the façade of the building, acknowledging its place as an accelerated school for gifted children from across Baltimore. Click here for a piece in the Baltimore Jewish Times about the dedication. 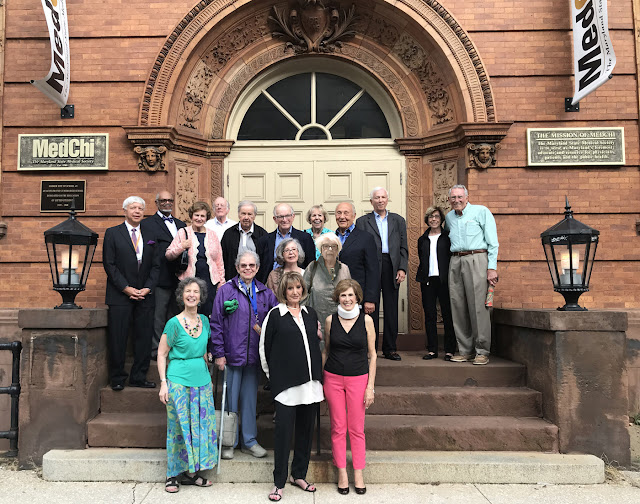 When the renovations to the building were completed in the mid-1980's, a reunion was held across the street at the Joseph Meyerhoff Symphony Hall (Mr. Meyerhoff had attended School #49) and a book filled with decades of memories was published. You can download it here.

If you have any memories of your time at School #49, please email them to us here.

Email ThisBlogThis!Share to TwitterShare to FacebookShare to Pinterest
Labels: School 49

Evening with the BSO & MedChi

Please join us for a fun evening! 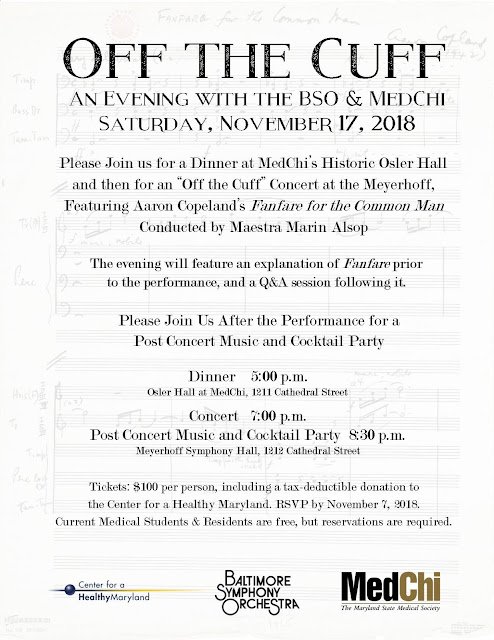 Please click here to purchase tickets.
You will be taken to a separate secure website to purchase your tickets via credit card.


Students and residents,
please email events@medchi.org to make your reservation.