We have years of Medical Journals from the late 1800’s and early 1900’s. Many states, including Maryland, have their own medical journals that are published several times a year. Clearly, there were no guidelines for what could be advertised in these journals, and some of the ads I’ve found are quite funny!

This one says that it will help people with syphilis gain weight through this fish extract! 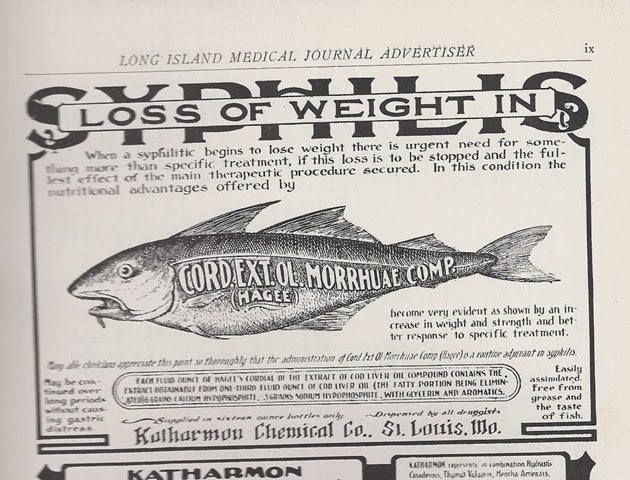 Port wine and olive oil? It’s a remedy for lack of iron! 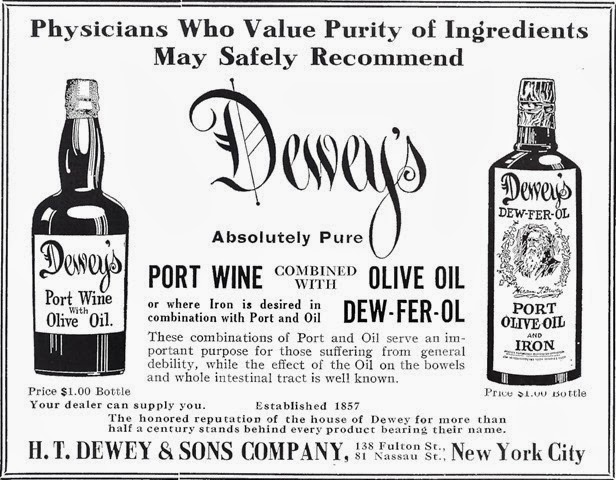 I am not completely sure what this is an ad for… 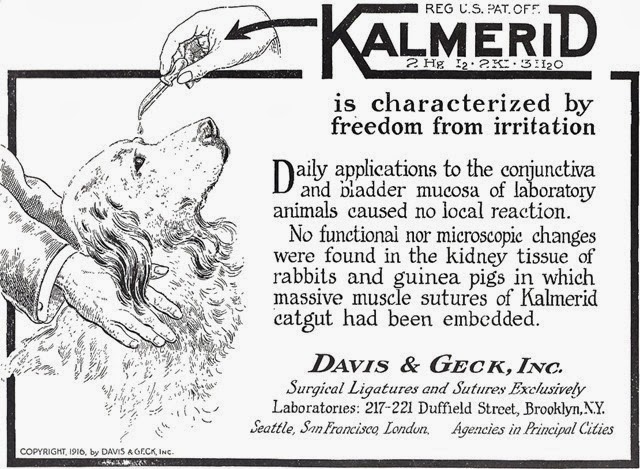 Figs and chocolate! It’s a laxative. Not too appealing. 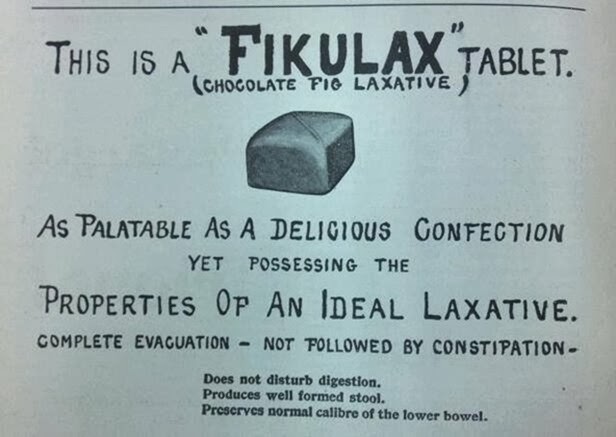 Heroin will knock that cold right out of you! 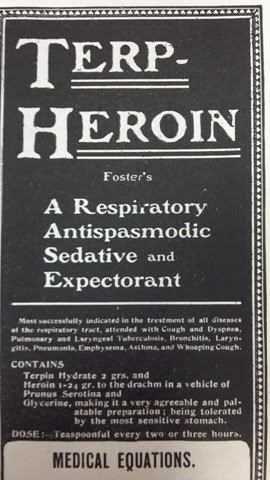 These are endlessly funny and I’ve only looked at one or two journals and one year!

In 1908, The Medical & Chirurgical Faculty of Maryland purchased a plot of land at 1211 Cathedral Street in Baltimore’s Mount Vernon neighborhood. It was just a few blocks from the headquarters building that they’d purchased about 10 years earlier, expanded and then outgrown. 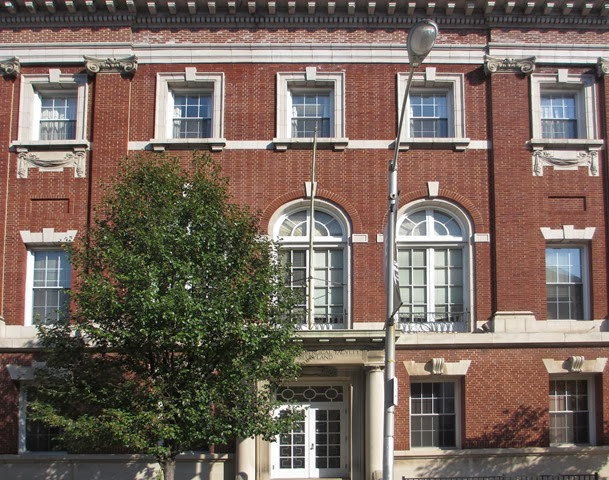 They engaged Ellicott and Emmart, well-known architects from Philadelphia, who had designed several other buildings in Baltimore, including the Roland Park Women’s Club and St. David’s Church. The building was similar in design to other medical libraries, such as the one in King’s County (Brooklyn). 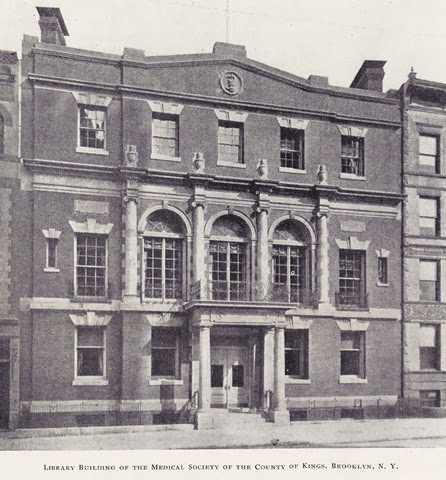 The lot on Cathedral Street was not quite square – the road angles slightly and the building could not have a large set-back, but needed to follow the street.

The angle is not noticeable from either the interior or exterior, but it’s clear when you see the architectural plans. There have been some small changes to the space, but it’s not been greatly altered since 1909.

The brickwork on the front of the building is not the usual Flemish bond, but it goes beyond that. On the ground level, there is a Diagonal Flemish Bond, which makes a diamond pattern. 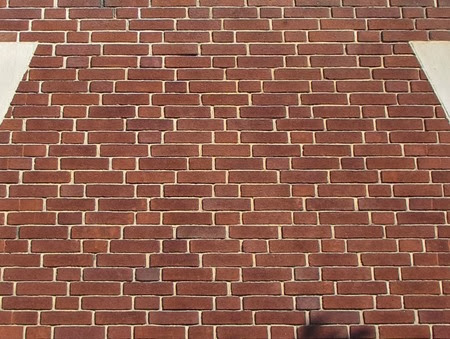 On the upper floors, the Monk’s Bond, an unusual pattern is used. It creates a very strong vertical line in the brickwork echoing the pillars and tall windows.. 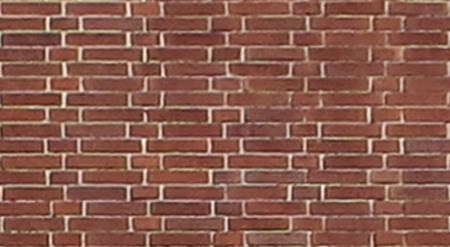 Above the front door, you can see the actual, legal and historic name of the organization… The Medical & Chirurgical Faculty of Maryland. Unfortunately, this entrance is no longer used. Chirurgical is the historic word for surgical and had its origins in Latin. 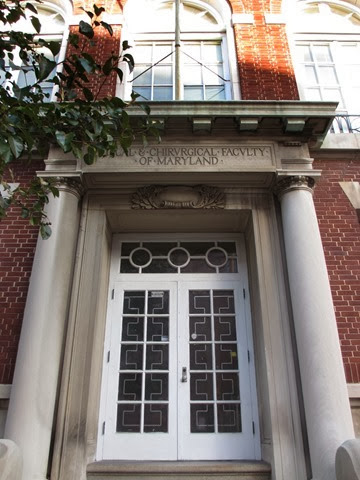 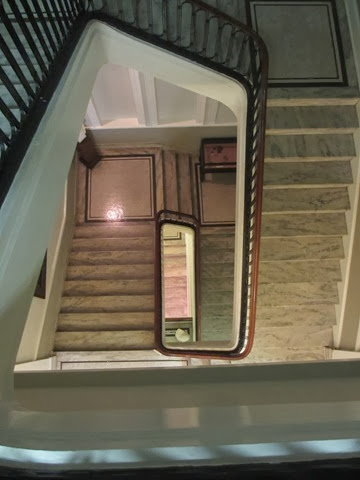 all ensure that the building does not look dated… much.

You can see additional images from the interior of the building here.

Email ThisBlogThis!Share to TwitterShare to FacebookShare to Pinterest
Labels: Architecture

Over the past 214 years, MedChi has been the recipient of a large (110+) number of portraits of luminaries in our organization, as well as a number of others. From John Archer, the first recipient of a medical degree in America, painted by an unknown artist, 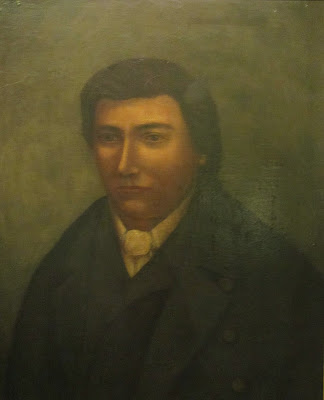 to the elegant Horace Hayden, the founder of the first dental school in America, painted by Rembrandt Peale, 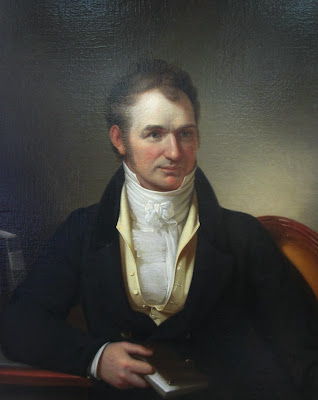 the paintings present quite a range of styles and artists.

For the past several months, I’ve been photographing the portraits and creating brief biographies of each sitter. You can find a link to the biographies here, and click the “portrait biographies” link.
Posted by Meg at Friday, November 22, 2013 No comments:

I found the funniest metal die stamp in the archives earlier this week. 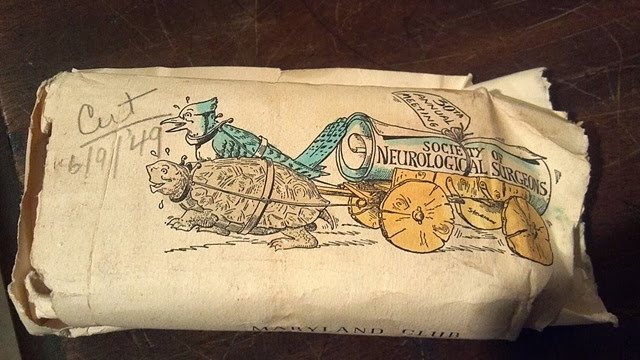 Working in co-operation, the Blue Jay from Johns Hopkins and the Terrapin from the University of Maryland, are pulling an old wooden cart with the scroll from the Society of Neurological Surgeons, which were celebrating their 30th Annual Meeting at the Maryland Club, where they still meet.

If you know the history of these two medical schools, it’s even funnier.

MedChi’s seal, which appears on our business cards and stationery, is a traditional seal, first used in the mid-1800’s in red. 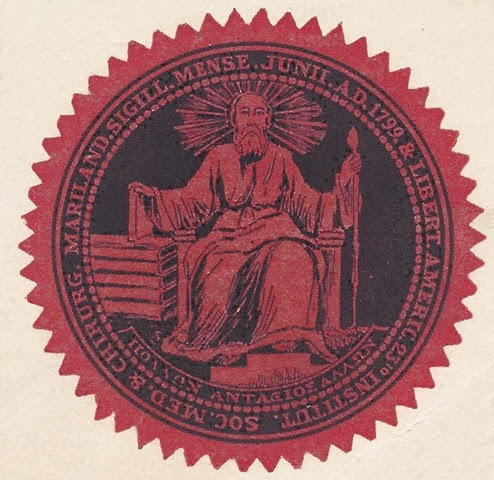 In the early 1900’s, most likely on the occasion of the move to our current building, Max Brödel, the noted medical illustrator from Johns Hopkins, created a new seal for us. Earlier this year, I found the original drawing in our archive. 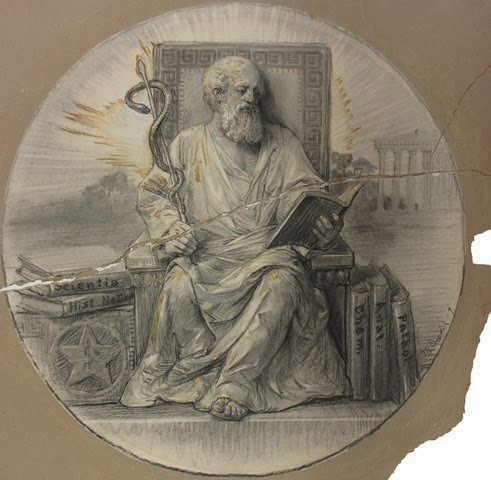 When the seal was finally engraved, it changed slightly, and now looks like this: 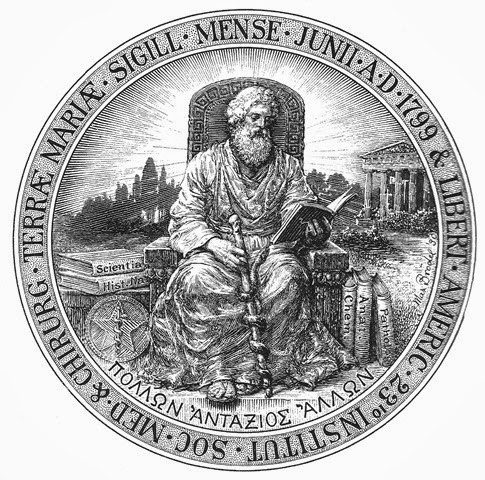 The translation of the Latin is basically “The Medical & Chirurgical Society. Maryland. This seal is in its honor. Month of June, AD 1799. 23 years after the liberty of America was instituted. I have no idea what the Greek lettering is, perhaps something about the Hippocratic Oath. Any ideas?

Posted by Pigtown*Design at Thursday, November 21, 2013 No comments:

“Keep Politics Out of the Picture”

While poking around the archives the other week, I found a large rolled-up canvas. We didn’t have enough room to unroll it in the stacks, so I brought it downstairs to see what it was. It measures about 4.5 x 12 feet.

The painting is a copy of a famous Victorian-era painting called “The Doctor” by Luke Fildes, R.A. (Royal Academy). It was commissioned by Sir Henry Tate (Tate Museum) and was painted in 1891. 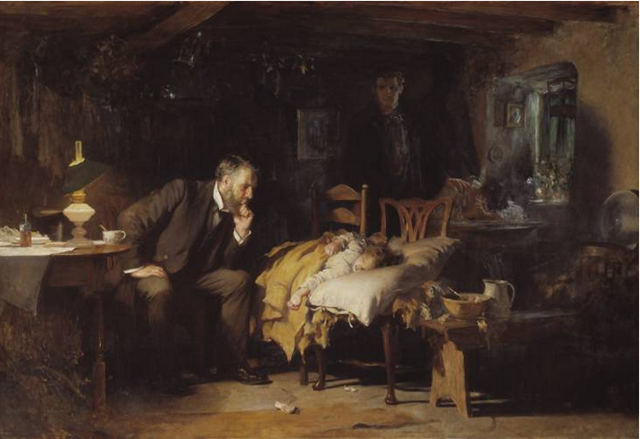 In 1949, Fildes' The Doctor was used by the American Medical Association in a campaign against a proposal for nationalized medical care put forth by President Harry S. Truman. The image was used in posters and brochures along with the slogan, "Keep Politics Out of this Picture" implying that involvement of the government in medical care would negatively affect the quality of care. More than 65,000 posters of The Doctor were displayed, which helped to raise public skepticism for the nationalized health care campaign.

My suspicion is that this mural is a remnant of this campaign. It was clearly adhered to a wall, as evidenced by the remains of adhesive on the back of it. Additionally, there seems to have been a frame around it, judging by the fading on the paint.

The mural is signed, but we can’t find any information about the painter. If you know anything, please leave a note in the comments.

Posted by Pigtown*Design at Thursday, November 21, 2013 No comments:

Email ThisBlogThis!Share to TwitterShare to FacebookShare to Pinterest
Labels: Art

I am the Director of Development and the unofficial historian at MedChi, The Maryland State Medical Society, and its foundation, The Center for Healthy Maryland.

The Medical & Chirurgical Faculty of Maryland, or MedChi, was founded in 1799 and has a long and illustrious history, and numerous accomplishments. We are located in Baltimore's Mount Vernon neighborhood and occupy several historic buildings.

Because of our long history, we have extensive archives, a collection of oil portraits and a library with more than 50,000 volumes, many dating back to the 1800's and 1900's.