I gave this presentation to the Historical Society of Harford County on the early history of medicine in the County. 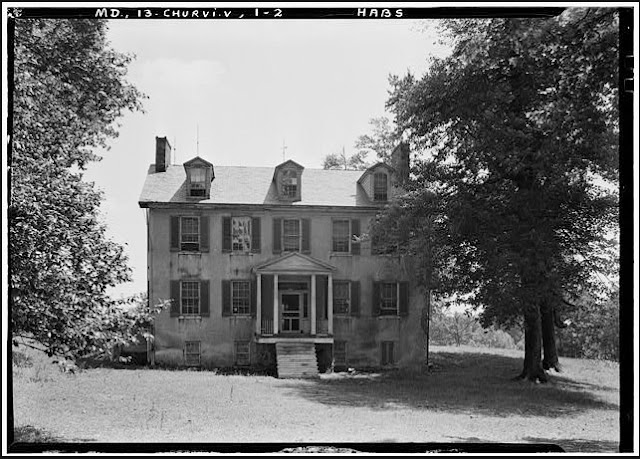 Harford County’s Early Influence on Medicine in Maryland
In the 1770’s, there were no controls over the practice of medicine. Charlatans and phony practitioners abounded.  A group of physicians called for some control over the practice of medicine and even minimal standards to be set. Physicians convened, and ideas were set, but nothing happened.
Over the next two decades, more meetings were held, and physicians in a number of counties came together to talk about medicine and share their knowledge. Among the counties where physicians met, was Harford County. In the late 1700’s, Dr. John Archer, his sons and pupils gathered to form a society known as the “Harford Medical Society.”
In January of 1799, physicians from each of Maryland’s counties, plus Baltimore City, assembled at the beginning of the Maryland General Assembly’s annual session. A proclamation was read to the legislature and the bill signed into being.
On January 20, 1799, the Medical & Chirurgical Faculty of Maryland was established to prevent quackery and pretenders to the medical arts. (As an aside, Chirurgical comes from the Latin word chirurgery, which was the ancient word for surgery. All surgeons are physicians, but not all physicians are surgeons.)
Among the Faculty’s 100 founders, four were from Harford County: Dr. John Archer, and Thomas Archer, as well as Thomas H. Birckhead, and Elijah Davis. Thomas Archer (1768-1821) was one of John Archer’s six sons.  Today, our focus is on John Archer, who personified medicine in early Harford County. 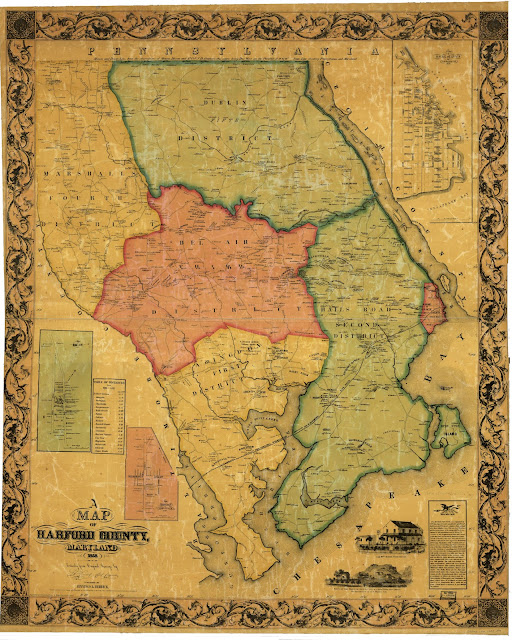 John Archer (1741-1810) was born in Churchville, and was the only one of five siblings who survived childhood. He was educated at Nottingham Academy and Princeton College. After graduation, he briefly considered opening a grammar school in Baltimore, but instead attended Princeton’s School of Theology, after which he became a Presbyterian minister. Although he mastered the prayers and the order of service, he did not find theology satisfying, and his first sermon was a serious bomb, so he began medical school.
Archer, one in a class of ten students, studied medicine with Professor John Morgan at the College of Medicine in Philadelphia, which later became the University of Pennsylvania. Archer graduated in 1768, the first person in the New World to receive a medical degree. There was some contention as to who would be the first, but by virtue of his last name, Archer was it. 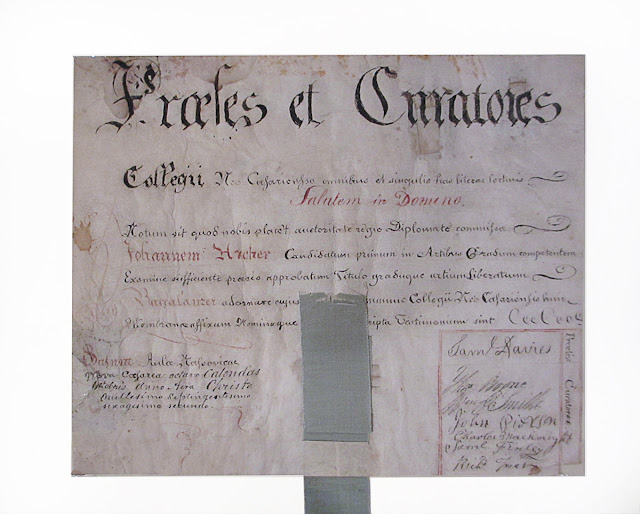 There was a dispute as to whether Archer actually received a medical degree, as there was really no such thing at the time. During the first years of the College of Medicine, there were two degrees awarded. First was a MB or Medical Bachelor, and three years later an MD was awarded. However, Archer never applied for the second degree, and officially, only a very few actually received the MD degree. The rule was discontinued in 1792.
In those days, physicians still relied on what we now call “folk medicine.” Among Archer’s papers are notations prescribing juice of several millipedes, and other physicians at that time were suggesting a goat’s blood julep, powdered bees and viper’s flesh, all washed down with frog-spawn water. I guess that proved that what didn’t kill you, would cure you. 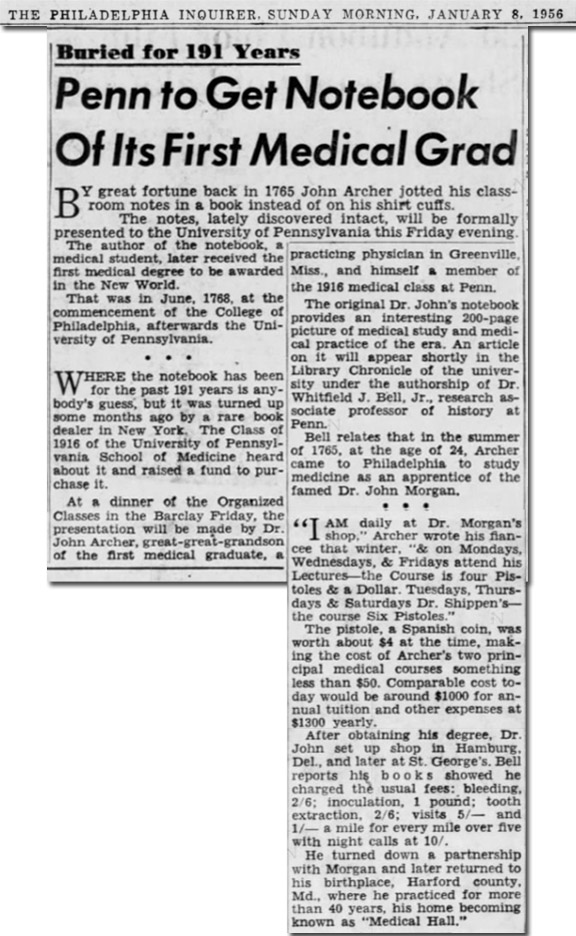 In 1769, Archer returned to Harford County to begin his medical practice, which continued for 40 years, with only two interruptions: The American Revolution and his service in the US Congress.
When the Revolutionary War broke out, Archer was already a seasoned physician, and he and former classmates created the “Medical Corps of the American Revolution.” He attained the rank of Major and was commended by General Washington upon leaving military service.
Between 1779 and 1800, he trained more than 50 students at “Medical Hall”, a substantial stone building on 450 acres which Archer had built.   There were between six and twelve students at a time, and while it was not a formal medical school, students were trained through a “preceptorship.” Medically, a preceptor is a practicing physician who gives personal instruction, training, and supervision to a medical student or young physician. This was the way most medical students learned their craft until the mid-1800’s when medical schools became more common. 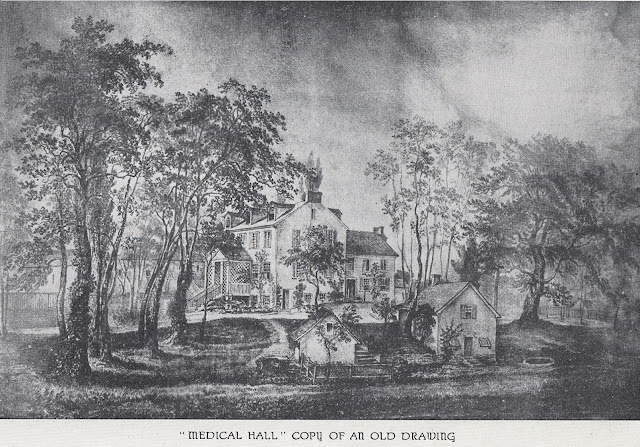 Until they had achieved a certain level of understanding of medicine, they were assigned the more routine cases, while Dr. Archer took the complicated ones, which kept him amply busy.
A story has it, that when a stranger asked Mrs. Archer if the doctor lived at Medical Hall, she responded, “He has his laundry done here.” So it is rather incredible that over the years, Archer and his wife had nine or ten children, six of whom, all boys, survived. Of the six, five chose to enter the field of medicine, the other became a lawyer.
In addition to Dr. Archer’s lectures, friends from his Philadelphia days coming through the area, stopped to lecture the students. These included notables including Dr. John Morgan, who was Dr. Archer’s mentor; Dr. Benjamin Rush, who was a classmate at Princeton; and Benjamin Franklin who talked about his recollections of the French medical system. 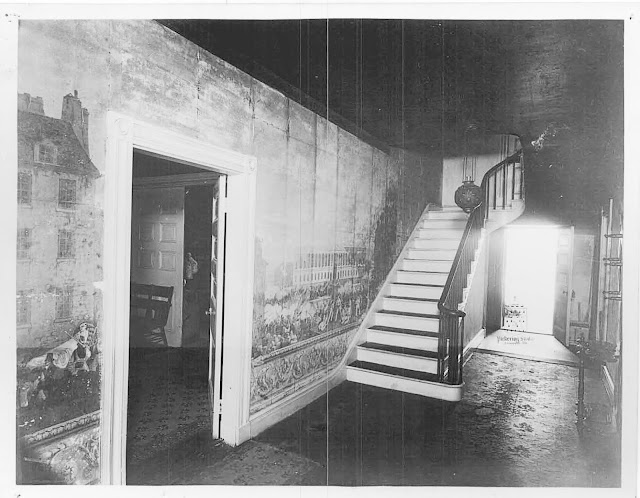 Older students accompanied him on his rounds and helped compound the medicines he prescribed. Younger students stayed behind at Medical Hall, studied their medical books and attended meetings of the Harford County Medical Society which was in its infancy. 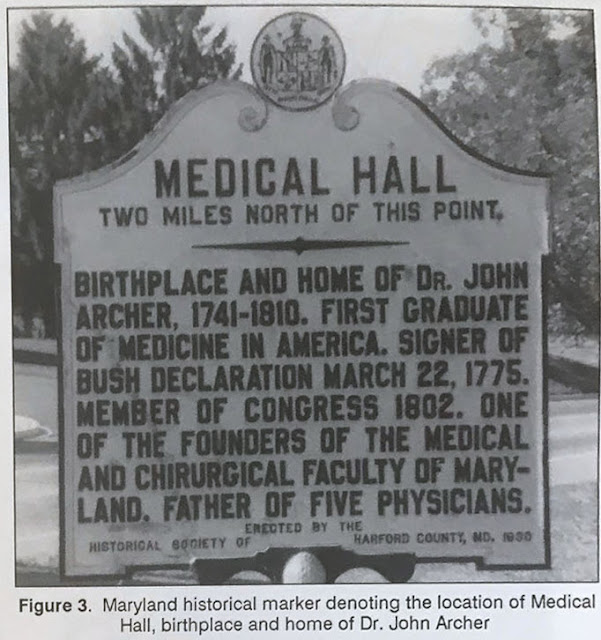 The Medical Hall alumni formed an association which pre-dated MedChi, but some of whose members became founders of MedChi. The alumni met to present original papers and share ideas.
Medical Hall also pre-dates the founding of Maryland’s first medical school, which was established by the Medical & Chirurgical Faculty in 1807. It eventually became the University of Maryland, School of Medicine and is partially the reason we were long known as “The Faculty.”
As if teaching young students and practicing medicine in the Mid-Atlantic states wasn’t enough, Archer also served in the US Congress for two terms. Contemporary accounts talk about him being pulled from a legislative session to care for a local child or assist at a difficult birth, as obstetrical issues and childhood croup were his specialties.
It is said that Archer’s interest in obstetrics began in Philadelphia when he witnessed what might have been the birth of the first “Siamese” or conjoined twins in America.
Archer was a leader in promoting vaccines, which had been around since 1798 and widely used during the later colonial period. What was unusual was that Dr. Archer was a leader in promoting vaccines, especially smallpox, for slaves, more as an economic protection rather than a medical one. Sick slaves could not work.
Archer seemed to be quite a character and he did not suffer fools gladly. In his biographical sketch in the Annals of Maryland Medicine, he is described as having:
“A mind of the combative order, never courting, yet never declining controversy. His sarcasm, when roused, is said to have been withering. In his portraits, he is remarkably stern. His heart is exceedingly kind and he was ever prompt to relieve the distressed…”
We have a portrait of Archer at MedChi, and we often wonder whether he was as scary as he looked, or if the painter was just not very talented.  His son mentions commissioning a painting, and we think the portrait we have might be the one mentioned. 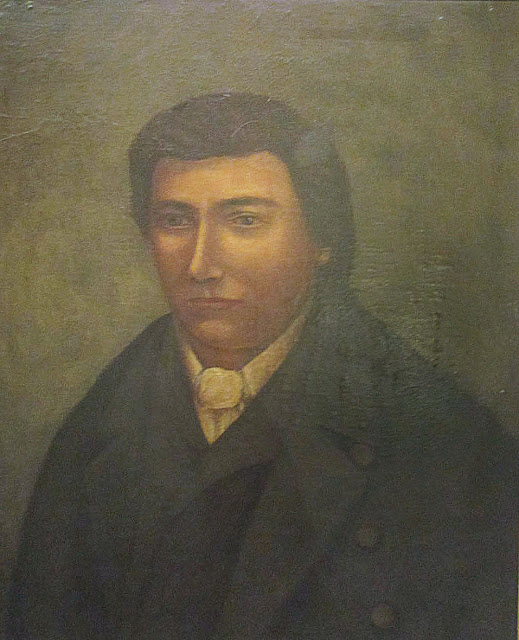 In 1808, Archer had a stroke, and was also suffering from rheumatism. In preparation for his death, he granted freedom to his slaves and left a prophecy that abolition of slavery would be coming, despite his understanding that the economy of the South was dependent on it.
Archer had a second stroke in 1810, which lead to his death a few weeks later. At 69 years old, he’d lived a long and full life, and left a lasting legacy.
* * * * * * * * * * * * * * * * * * * * * * * * * * * * * * * * * * * * * * * * * * *
As I mentioned, John Archer had six sons, five of whom were physicians. We already learned a bit about Thomas Archer.
Robert Harris Archer was born in 1775. He was a pupil of his father, and then practiced in Baltimore and as physician at the City Hospital. In 1799, he was a surgeon in the 27th Regiment of the Maryland Militia. He moved to Lancaster County for several years, and then to Cecil County until 1819. In addition to his medical practice, Robert served as a member of the legislature for four years, on the Governor’s Council for the next four years, and as a Judge in Orphans’ Court for ten years, until his death in 1857.
John Archer, Jr. was born at Medical Hall in 1777. He also was taught by his father, but eventually received his MD from the University of Pennsylvania. He served as a physician in the Maryland Militia during the War of 1812. He died in Baltimore in 1830.
James Archer was born in Harford County in 1779, presumably also at Medical Hall. He studied with his father, and also at Penn. He practiced in Harford County until 1810, when he moved to Mississippi, where he died in 1815.
The youngest son, George Washington Archer, also studied at Medical Hall, but sadly, he died while he was a student.
Stevenson Archer, the son who became a lawyer, didn’t do too badly for himself, becoming the Chief Justice of Maryland, and a member of Congress. In 1817, he was appointed by President James Madison as the Judge of the Mississippi Territory, which also gave him gubernatorial powers.
* * * * * * * * * * * * * * * * * * * * * * * * * * * * * * * * * * * * * * * * * *
The other Harford County founders were Thomas Archer, Thomas Birckhead and Elijah Davis.
Thomas Archer (1768-1821) was the oldest of Archer’s surviving sons, and was one his father’s pupils at Medical Hall. In 1802, Thomas Archer commissioned the portrait which we have of his father, which was reputed to be a very fine likeness of him, which worries us! Sadly, Thomas was an invalid for many years. It was said of him, “No human being could lay a wrong at his door.”
Thomas Birckhead was probably born in Harford County, although no records remain which give his birthplace or birthdate. He lived in an estate near the Magnolia Station of the Philadelphia, Wilmington and Baltimore Railroad. His son, Samuel Birckhead, son-in-law, James Reardon, and grandson, Lennox Birckhead, were physicians. In addition to being a physician, he served as a trustee of Harford County’s first school. The date of his death is unknown, but it was thought to be sometime in late 1829 or early 1830.
Elijah Davis (1760-1829) was born in Chester County, PA, and attended medical lectures at the University of Pennsylvania, as did his brother. He was taken prisoner at the Battle of Long Island in 1776 and taken to England on a prison ship where was imprisoned for two years. He went to Paris to study medicine, came back to the States, but returned to Paris to finish his medical degree. In 1786, he came back to Harford County for good. Davis was a member of the Maryland House of Delegates and State Senate for four terms. He was an honorary member of the Medical Society of Baltimore. His son, Septimus Davis, was also a physician.