Our friends from the Harford County Historical Society came down for a tour last week and brought along some presents for us! They were de-accessioning some medical books which were not relevant to their collections and thought we'd be interested in them. 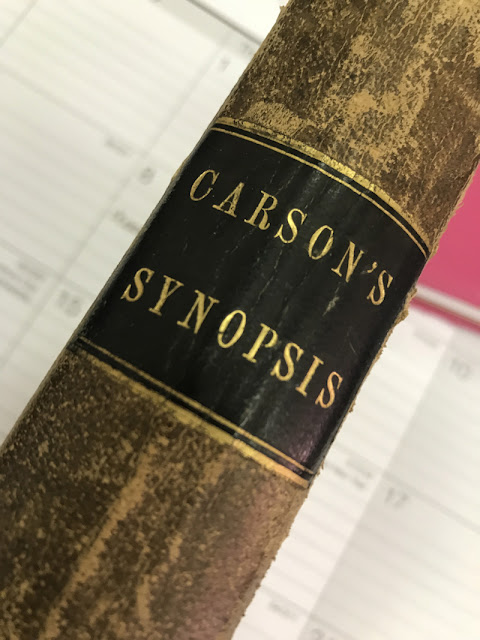 One in particular caught my eye. The book is "The Synopsis of the Course of Lectures on Materia Medica and Pharmacy, Delivered in the University of Pennsylvania, 1855. 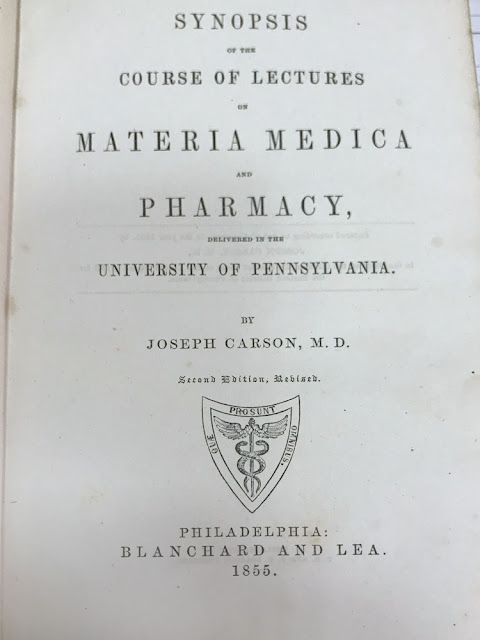 What's fascinating about this book is that about half of the pages are blank, so someone could amend the lectures with their own notes. Even more interesting is that the notes look to have been taken over a number of years by various students. 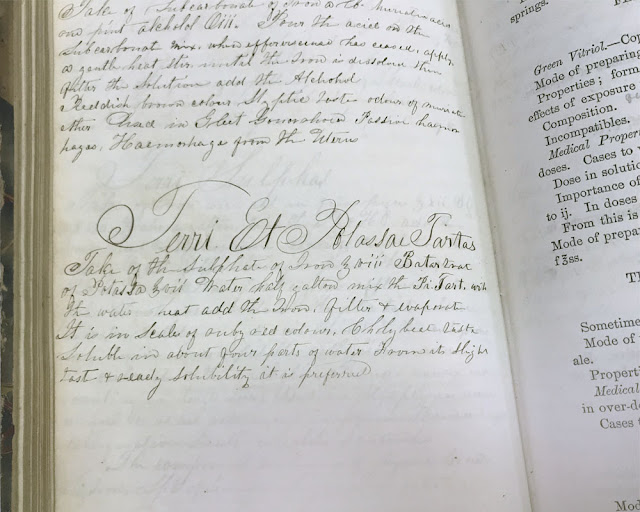 Some of the writing is the beautiful copperplate writing of the age, clearly done in a pen dipped in ink. Other writing is less beautiful and almost scribbled in pencil. 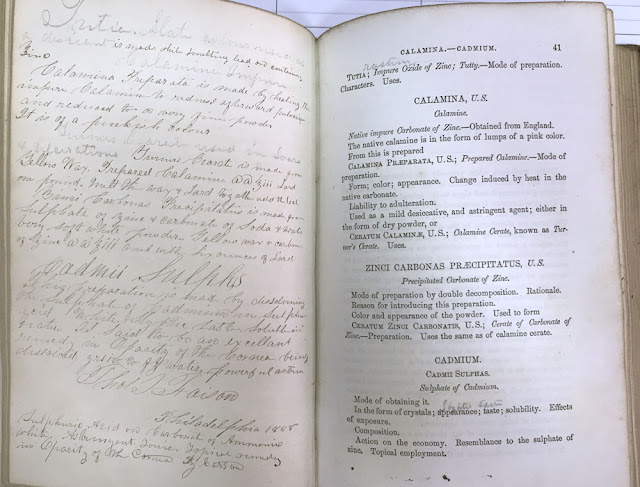 I have never seen this in any of our other books and was surprised when I started flipping through it and found all of the hand-written notes. 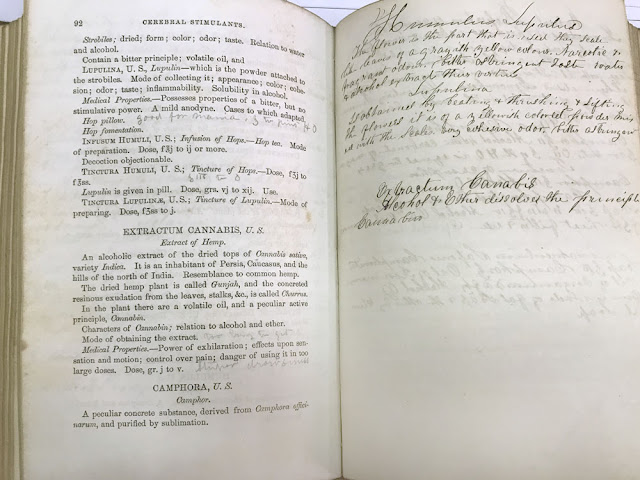 Another interesting aspect of the book was the botanical notes on everything from camphor to calamine to cannabis. 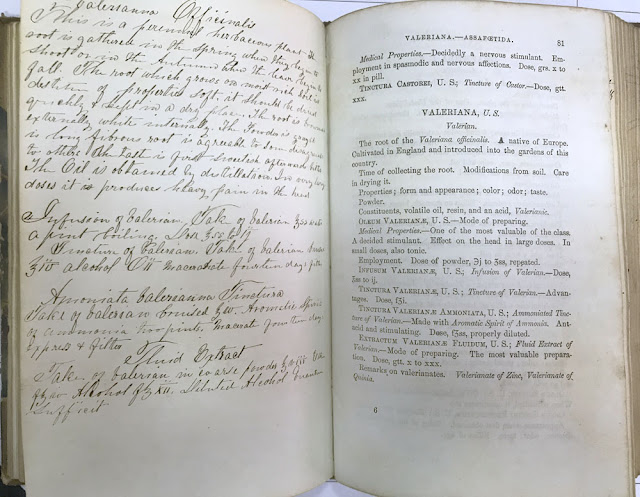 Email ThisBlogThis!Share to TwitterShare to FacebookShare to Pinterest
Labels: Component Societies, Cultural Exchange, On My Desk 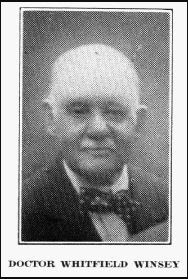 Dr. Dunbar probably had a great influence on Winsey’s acceptance into Harvard Medical School. As a graduate of the prestigious University of Pennsylvania Medical School and the founder of the Baltimore Medical Institute, Dr. Dunbar had important connections in the medical community which would prove to be an immense help to Winsey, an up-and-coming black physician.

In 1882, Winsey became the first black physician admitted to the Medical and Chirurgical Faculty of Maryland. His connections to Dunbar, even after Dunbar’s death, served him well.

An article on Dr. Dunbar’s death a week earlier in the Sun stated “He was preceptor [tutor] of a large number of the graduates of medicine in this city, having as high as twenty-five students at one time in his office during the sessions of the medical college here. Many of his students have risen to eminence in the profession.”

Winsey may be fairly counted among those eminent students, especially as his accomplishments were not only of importance to his profession. With the memory of Dr. Dunbar so fresh in their minds, his colleagues at the Faculty helped Winsey in his efforts to gain recognition of his talents in the larger medical community. Through this accomplishment, Winsey was able to break down the barriers of race.

Winsey set up his medical practice out of his home at 1220 E. Fayette St. in 1872. During the 1870s and ‘80s, Winsey’s name appeared in the pension files of several black Civil War veterans as their physician. This was the beginning of a prosperous career serving his fellow African Americans professionally, both as a business and a social service, as can be seen in his later medical associations.

In 1894, a group of prominent black physicians founded Provident Hospital on Orchard Street, which was the first private teaching hospital for blacks in Baltimore.

In 1902, the hospital moved into two remodeled residences on Biddle Street. Winsey was an instructor at Provident, which provided teaching for colored internists.

In 1901, Winsey became the treasurer and physician for the Industrial Home for Colored Girls at Melvale, a post which he held for eighteen years until his death.

According to his biography in the Medical Annals of Maryland, Winsey was also a Delegate to the International Medical Congress at Washington. In addition, Winsey was the author of several papers before the Faculty, the Clinical Society of Maryland, and the Medical Congress. Sometime before his death in 1919, Winsey also became a member of the American Medical Association.

Although Winsey was employed as a physician at black institutions such as the Melvale Home and Provident Hospital, he belonged to white fraternal and professional organizations. Perhaps Winsey saw entry into traditionally white organizations as a way to further break down racial barriers, or to further his career. Perhaps his sponsors saw helping Winsey as a contribution to the advancement of his race, and perhaps his light skin color made that process easier. Membership in such societies indeed had a positive influence upon his career, although Winsey was unable to cross the color bar and work in white institutions.

Dr. Whitfield Winsey provided leadership for many aspects of nineteenth century African American society in Baltimore. As a member of the small but growing cadre of black physicians in the city, the Harvard-trained Winsey served as the black voice on the Medical and Chirurgical Faculty of Maryland, a prestigious medical society that he joined in 1882.

From: TheRoad From Frederick To Thurgood
Posted by Meg at Monday, February 12, 2018 1 comment:

One of my current projects is cataloging the bronzes in our collection. There are several scattered around the buildings, including the two of Sir William Osler, MD, which are in Osler Hall. 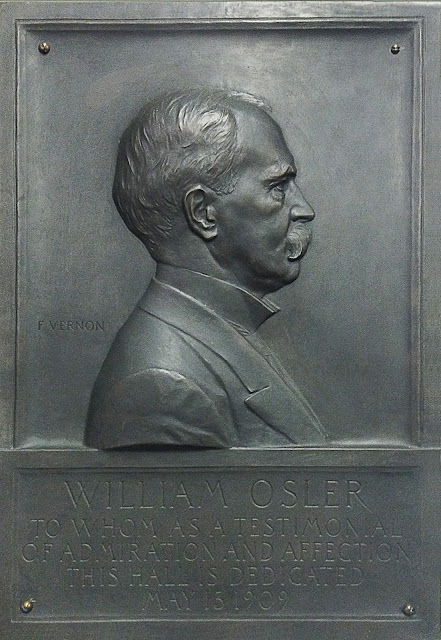 Today, I received a phone call from someone who had seen my name listed as the "in-house" historian, and she asked if I knew about a bas relief that had been at our Eutaw Street location, also known as Hamilton Terrace.

First, I was pretty sure I'd never heard it called Hamilton Terrace, but when I checked the Medical Annals (1899), the HQ location was referred to by both names, sometimes at the same time.

Second, when I was thinking of a bas relief, my thoughts immediately went to something like this. 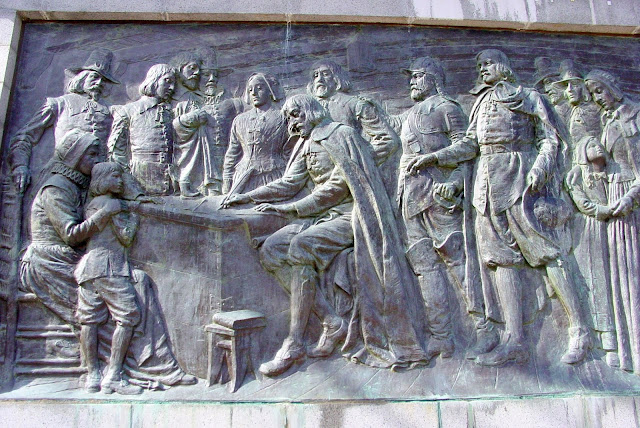 It wasn't until the end of the conversation, that she mentioned it was a bronze. At that point, I knew exactly where it was. I ran downstairs and took some pictures of Dr. George H. Rohé (1851-1899). He was president of MedChi in 1893-94, amongst many other accomplishments. 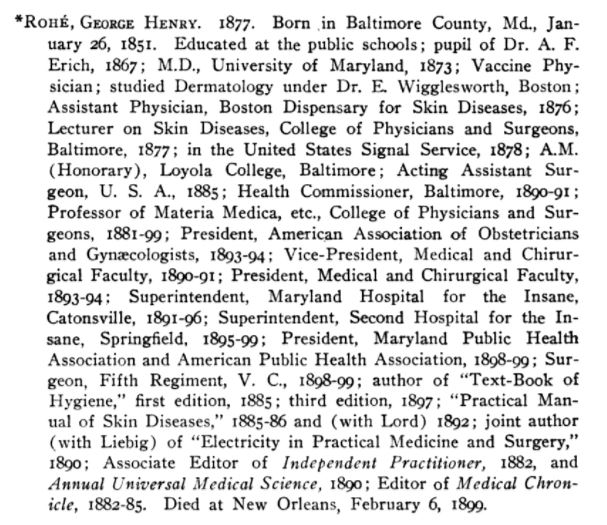 The bronze is by local sculptor, Ephriam Keyser, who was a contemporary of Dr. Rohé. 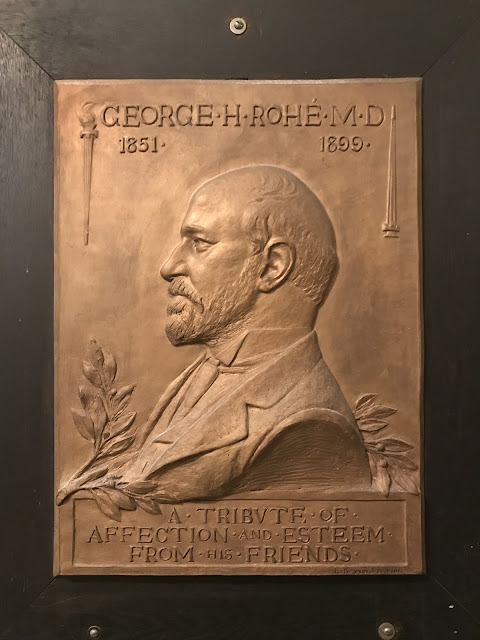 It is signed at the bottom: E. Keyser Fec 1901. Fec is short for fecit, which means "made by", and is often found on works of art.

Stay tuned for posts about the other bronzes!
Posted by Meg at Thursday, February 01, 2018 1 comment: