In January of 1799, just as the Maryland State Legislature was beginning its annual assembly, the Medical & Chirurgical Faculty of Maryland was legislated into existence. From across the state, 101 medical men convened to establish an organization to “prevent quackery and pretenders to the healing arts.”

Although the first attempt at organization had proved abortive, it can scarcely have failed to leave its impression. The seed had been sown which was to germinate in the minds of the doctors for a decade, and then ripen into the splendid charter of 1799.

This Act received the signature of the Governor and thereby became a law of the land on the twentieth of January of the aforesaid year. It would be interesting to know something of the details connected with its authorship and passage, to pry into the past and see the old doctors of a hundred years ago as they conferred together over this document of such far-reaching significance to them and their successors, to know who were they who labored most for its adoption, and what was said and done on the occasion.

But these like many other events connected with those early days are hidden from us perhaps forever and we can only picture them to ourselves in imagination.

For it is a singular fact that in all the researches of this writer, extending back now twenty years, he has never seen or heard of any manuscript relating to the first meeting, and at the recent Centennial not a single letter or document was offered making any allusion whatever to it. The writer has in his possession a medical diary and note book of Professor Porter of the year 1799, in which it is not once mentioned.

We know this much however: That the charter met with opposition in its passage through the Legislature and that for some years the members were in constant apprehension lest that body should seize some pretext to annul it. 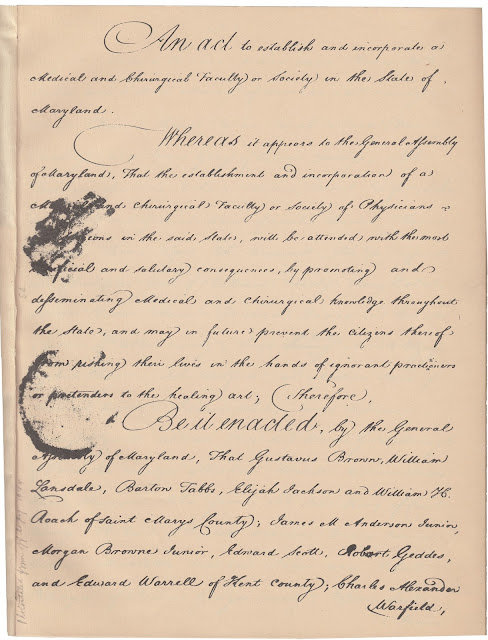 The charter is entitled An Act to establish and incorporate a Medical and Chirurgical Faculty or Society in the State of Maryland. Its objects are stated in the preamble which reads as follows:

Whereas it appears to the General Assembly of Maryland that the establishment and incorporation of a Medical and Chirurgical Faculty or Society of Physicians and Surgeons in the said State will be attended with the most beneficial and salutary consequences by promoting and disseminating medical and chirurgical knowledge throughout the State, and may in future prevent the citizens thereof from risking their lives in the hands of ignorant practitioners or pretenders to the healing art, etc.

And again in the body of the Act, Such purposes as they may judge most conducive to the promoting and disseminating medical and surgical knowledge or to alleviating the calamities and miseries of their fellow citizens, The Act further provides for the possession and disposal of property the holding of a meeting for organization the making of by-laws and the adoption of a seal.

The first meeting was appointed to be held at Annapolis on the first Monday in June 1799, and fifteen members were declared to be a quorum. The incorporators and their successors were declared to be one community corporation and body politic forever by and under the name of the Medical and Chirurgical Faculty of the State of Maryland.

The names of 101 incorporators were given representing from three to six each the nineteen counties into which the State was then divided, and the cities of Annapolis and Baltimore. These names represent not only the best elements of the Maryland profession of the period, but the highest types of physicians to be found anywhere, men trained at the schools of Leyden, Paris, London, Oxford, Edinburgh, Glasgow, Aberdeen, Dublin, Philadelphia; and pupils of Boerhaave, Hunter, Cullen, the Monros, Bell, Rush, and others whose names are enrolled high upon the scroll of fame men erudite in all the knowledge of medicine as it was then taught and understood; fine classical scholars to whom Latin was almost as familiar as their native tongue.

In the language of one of our orators, Professor Richard Wilmot Hall, at the biennial oration of 1815, “To classical erudition the most liberal and profound they united the stores of medical learning with which the ancients or moderns had enriched the science of physic or of which the schools of America and Europe could boast.”

Dr. Thomas E. Hunt, Jr., a long-time member of MedChi, The Baltimore City Medical Society, the Maryland Orthopedic Association, and the Medical Alumni Association of the University of Maryland, passed away on Christmas Eve. Please find his obituary here. 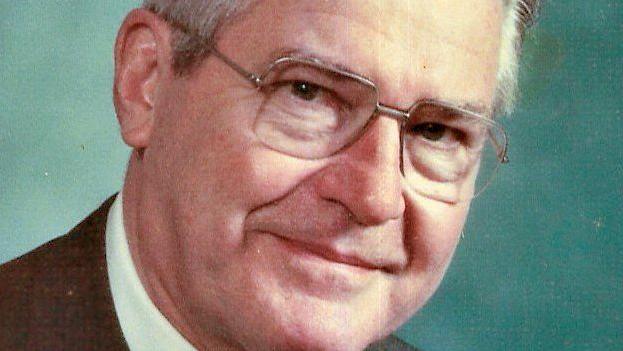 Dr. Hunt was the unofficial historian of MedChi, The Maryland State Medical Society. In 2008, MedChi created the annual Thomas E. Hunt, Jr., MD Lecture Series to explore the intersection of medicine and history.
“Tom was the most honest person I’ve ever known,” said Dr. Allan D. Jensen, a friend. “In later years, we would be out driving and he would be the navigator, calling out where William Osler [one of the co-founders of Hopkins Hospital] lived.”
“My father was fascinated by the city and the people who live here,” said his son, James Hunt. “Though he was encouraged to move his practice to the suburbs after the riots in April 1968, he declined. Whatever the city’s problems, he didn’t think they would be improved by his leaving.”
The family has requested that memorial contributions be made to The Center for a Healthy Maryland, care of MedChi. Please go to this link if you would like to contribute.

Dr. Hunt, an integral member of MedChi's History of Maryland Medicine committee, will be greatly missed by all of us.
Posted by Meg at Friday, January 05, 2018 5 comments: