The Nutshell Studies in a Nutshell

With the lecture about the Nutshell Studies of Unexplained Death, just under two weeks from now, I thought I would give you a bit of background about them.

These fascinating Nutshell Studies were created in the 1940’s by Francis Glessner Lee, an heiress to the International Harvester Fortune. 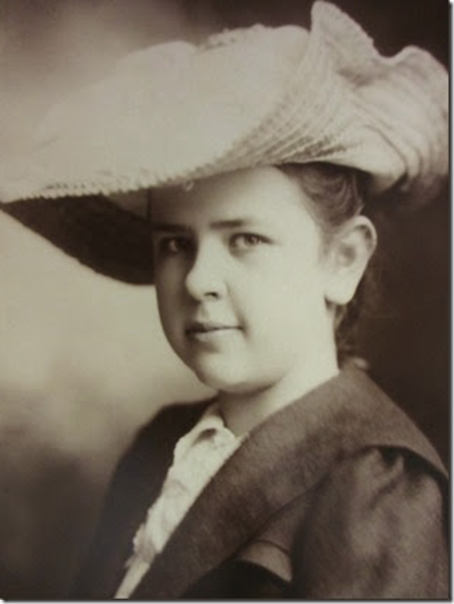 She had wanted to attend university to study law, but was not allowed and instead was taught how to knit and sew and other domestic pursuits. Through a friend of her brother’s, she came to be interested in early forensic medicine, but realized that police officers and coroners didn’t take the time to “read” a crime scene, and often destroyed any remaining clues. 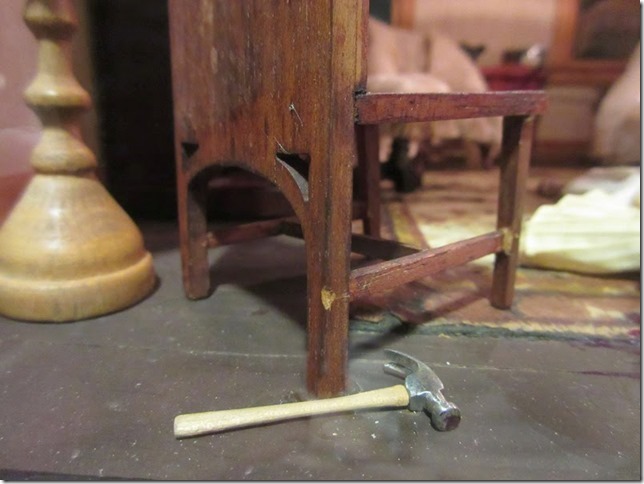 Mrs. Lee’s brother’s friend was on the faculty of Harvard University, and Mrs. Lee created the Center for Legal Medicine, donated thousands of medical books, and endowed a chair for legal medicine in 1931. She also created the Harvard Associates in Police Science (now administered through the MD-OCME). When the legal medicine department closed in the early 1960’s, the Nutshells came to Baltimore with Russell Fisher, M.D., a professor who was joining Maryland’s Medical Examiner’s office. 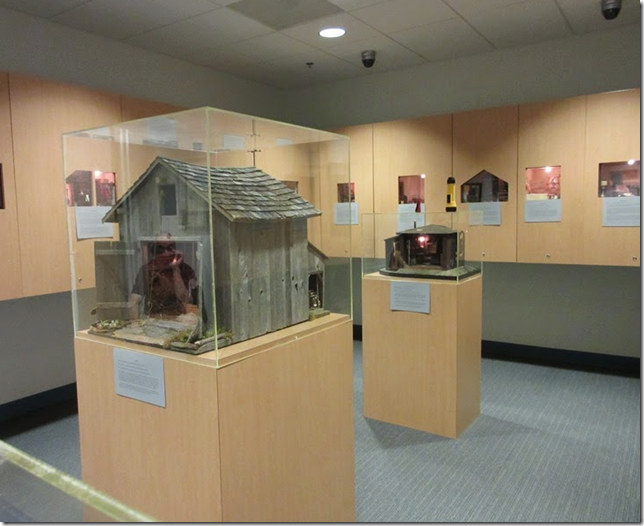 Mrs. Lee was convinced that if you could read the clues, you could solve the crime and began recreating crime scenes, on a scale of one inch to one foot. Her first Nutshell, an old barn, took three months to build. She used weathered wood from an old barn and cut each of the shingles on the roof. 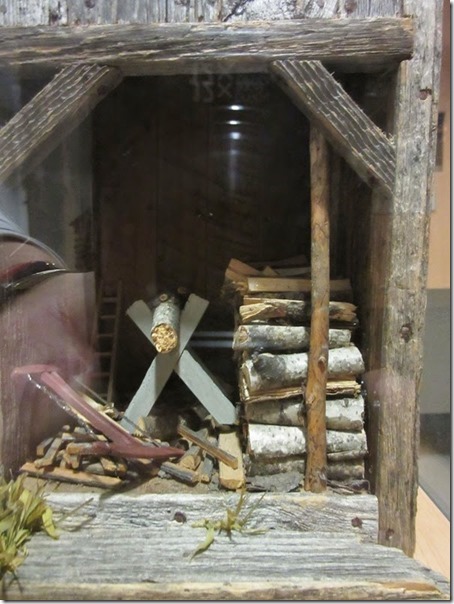 The detail on these is incredible. She knit a tiny blanket on straight pins. 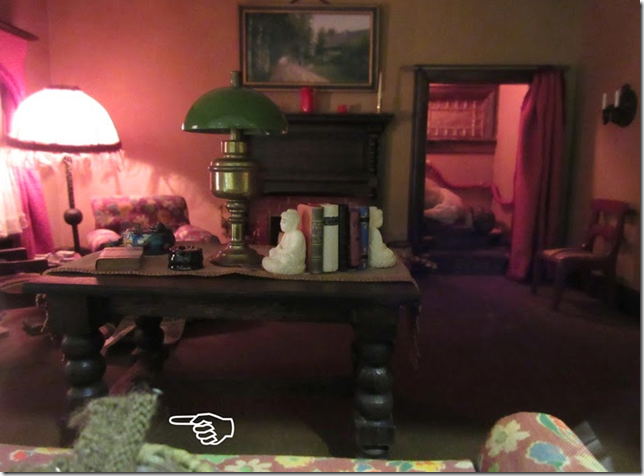 She even fashioned a tiny teddy bear from the knitting. 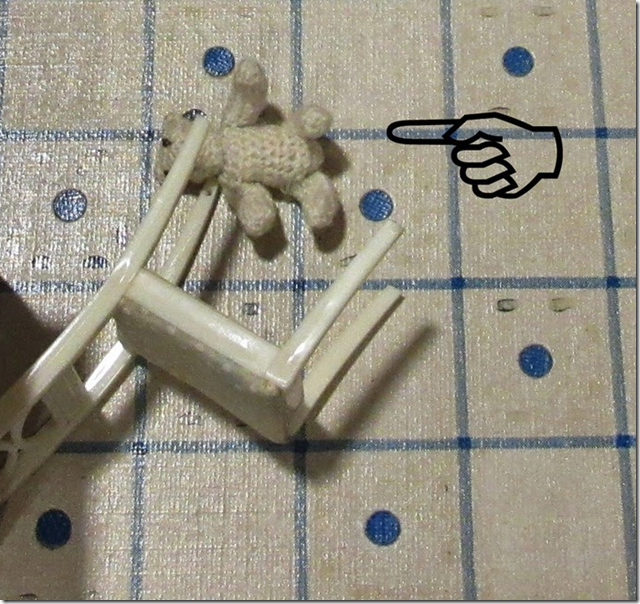 All labels, fabrics, furniture, accessories and every single thing in each room were created by hand. One one wall, there’s a calendar, but she didn’t have just the one month printed, she had the subsequent six months behind it. Appliances and utensils came out of Cracker Jack boxes, or were charms from charm bracelets, one of which was 14k gold, painted silver. 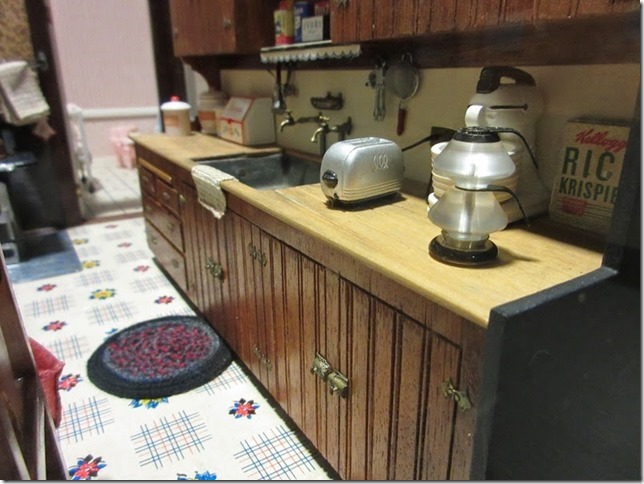 But what is MedChi’s role in all of this? In the late 1930’s, the Faculty received a proposal during the House of Delegates meeting to create a state-wide medical examiner’s office, instead of the more common county coronor system which is still in use in most of the US. The proposal was studied for a year, and then voted on by the membership. It passed, and was put into law by the Maryland General Assembly in 1939.

Russell Fisher, M.D. was the second Chief Medical Examiner and held the position for more than 35 years. 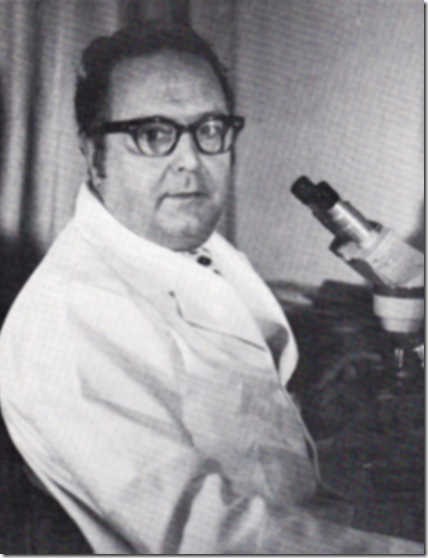 He was a very active member of MedChi, serving as President of the organization in 1969. The legal suite at MedChi is named in his honor.

MedChi, The Maryland State Medical Society
and the Center for a Healthy Maryland Present
A Pop-Up Lecture for Artscape Week 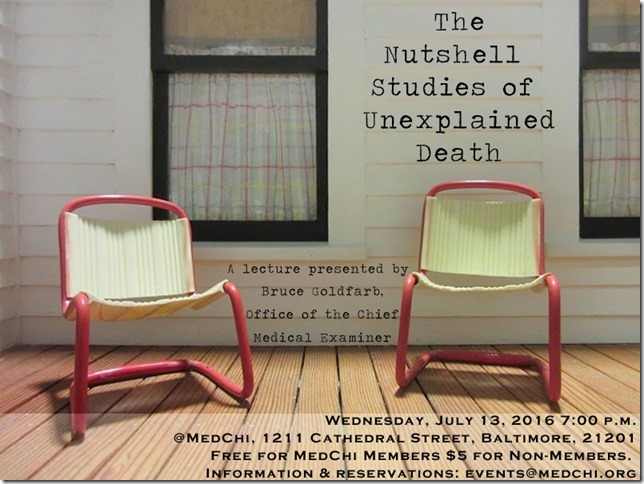 The Nutshell Studies of Unexplained Death
One of Baltimore's Hidden Treasures

With
Bruce Goldfarb, Office of the Chief Medical Examiner

Plenty of free and paid parking available in the area.

The event is free for MedChi members and $5.00 for non-members.

Please click here to purchase tickets. You will be taken to a third-party site.
Names will be held at the door.

U P D A T E :
Here’s a great article about the Nutshells that just appeared on the National Geographic’s Gory Details blog!

For the Future Archives

Sometime, a hundred years from now, someone’s going to find a faded piece of paper and realize that they are looking at an event that made history. MedChi member, Willarda V. Edwards, MD, MBA was elected to the AMA’s Board of Trustees on the first ballot.

CHICAGO -- Willarda V. Edwards, M.D., M.B.A., an internal medicine physician from Baltimore, was elected today to the Board of Trustees of the American Medical Association (AMA), the nation's largest and most influential physician organization. 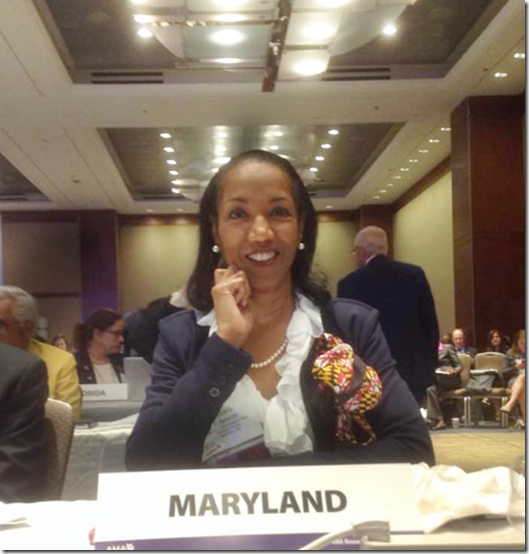 "When I first came to our House of Delegates in 1994, I was amazed and awestruck, and immediately said, 'I want to be a part of this!' Since becoming a delegate to the AMA, my passion and enthusiasm have multiplied," Dr. Edwards said. "I am honored to be a Trustee for the nation's most prestigious medical organization. I deeply respect the ability of colleagues across the country to assist each other with challenges and opportunities to improve the care we give to our patients and the support we give to our fellow physicians." 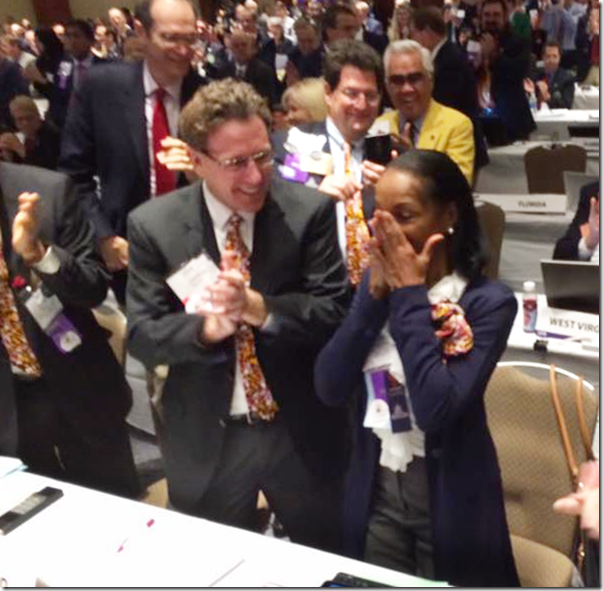 Dr. Edwards joined the AMA in 1994. In 1997, she was appointed to the inaugural governing council of the AMA Women Physicians Congress (now the AMA Women Physicians Section) and served as its chairperson from 2002 to 2004. She has served on and chaired AMA House of Delegates (HOD) reference committees, participated on task forces appointed by the AMA-HOD speaker, and served on and chaired AMA's HOD Committee on Compensation of the Officers through 2007. In 2011, she served on the search committee for the next AMA executive vice president. She currently serves as immediate past chair of our AMA Council on Constitution and Bylaws.

She also has served as the national director of the National Association for the Advancement of Colored People (NAACP) Health Advocacy Division and as the president and COO at the Sickle Cell Disease Association of America. 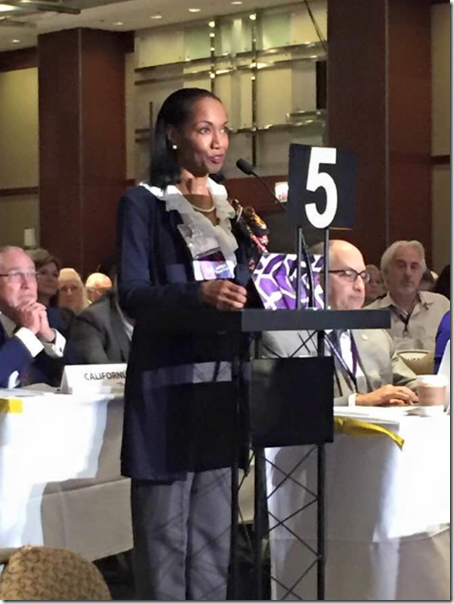 Dr. Edwards earned a medical degree from the University of Maryland School of Medicine and earned an MBA from Loyola College in Maryland.

Please join all of us at MedChi and the Center for a Healthy Maryland
in congratulating Dr. Edwards!

In a lot of the literature written about Marcia, she refers to the first person whom she hired at the new building, sort as a jack of all trades, and most importantly, as the person who would help her maintain the brand new space. She talks about hiring him mostly because she loved his name: Mr. Caution. Specifically, Mr. Gustave Orwell Caution.

At some point  In 1923, Marcia’s man Friday must been succeeded by one of his children or nephews, because in the 1960’s, there’s a mention of another Mr. Caution  was joined by his son, Mr. Walter S. Caution, who was the custodian of the Faculty’s building.


But the article I found doesn’t really talk about his work at the Faculty, but rather, his well-dressed dogs!
The photo of Mr. Caution and his dogs is clearly taken on the steps of the original (and at that time, only) Faculty building. It is such a sweet story, and clearly this man loved his dogs.

Email ThisBlogThis!Share to TwitterShare to FacebookShare to Pinterest
Labels: Building, Marcia for the Holidays

A Very Gracious Thank You!

As you may remember, we give the winner of the Noyes Award at the annual Medical Librarians Conference a bouquet of flowers from MedChi, in memory of our dear Marcia Noyes. This year’s winner was Margaret Bandy, AHIP, FMLA, from Denver. 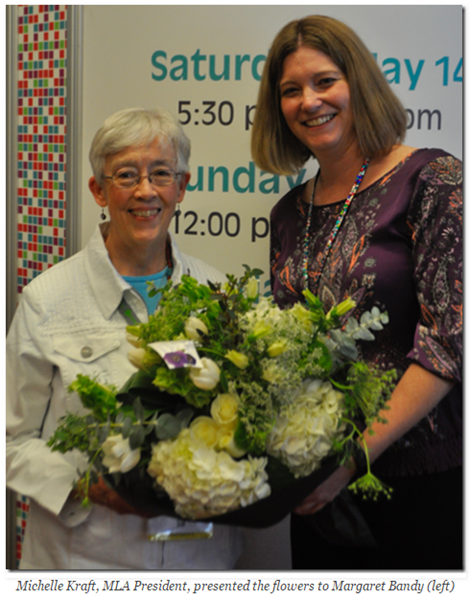 We received the most lovely and gracious thank you note from her and I am so pleased to share it with you.

…The pictures really don’t do justice to unique variety of white flowers—hydrangea, roses, tulips, and many others. I am sure you can tell from the picture of me with Michelle Kraft that I was so happy to receive this tribute.  The entire event was very special to me and your gift added so much to the occasion.  I was able to enjoy the flowers for several days and the fragrance in our hotel room was delightful…

In my brief remarks at the celebration on Tuesday, I quoted from some of the writings by and about Marcia C. Noyes, including the obituary that appeared in the January 1947 Bulletin of the Medical Library Association. I am sure you are familiar with it, but these lines especially touched me:

Miss Noyes was not only admired, but was loved by medical librarians from coast to coast, and in her death, each of us experiences a deep sense of personal loss...  Even more important [than her many achievements], have been the principles of altruistic cooperation and service, which she has ever fostered and nurtured in the Association's activities. We are wealthy in the heritage of ideals with which we have so been endowed. . . May the spirit of friendliness and devotion to service, which Miss Noyes so well exemplified, remain with us as we carry on in the field of medical libraries which she loved so well.

Again, many thanks for this very thoughtful gift, and please extend my thanks to the board and staff of MedChi.  I hope someday to visit to see where Marcia C. Noyes worked and lived, and to thank you in person.


© 2013-2020 MedChi, The Maryland State Medical Society and the Center for a Healthy Maryland