As I search through our archives, I frequently find old menus from the late 1800’s and early 1900’s. Occasionally, there’s a term that I’ve never heard before, like Saratoga Chips, or Cardinal Punch.

This menu, from the dedication of the library in the new Cathedral Street building in 1909, features a drink called Roman Punch. It’s served, with Pall Mall cigarettes, as an intermission between the courses, each of which feature their own alcoholic drinks, including Sherry, Champagne, Hock (a German white wine) and assorted liqueurs. 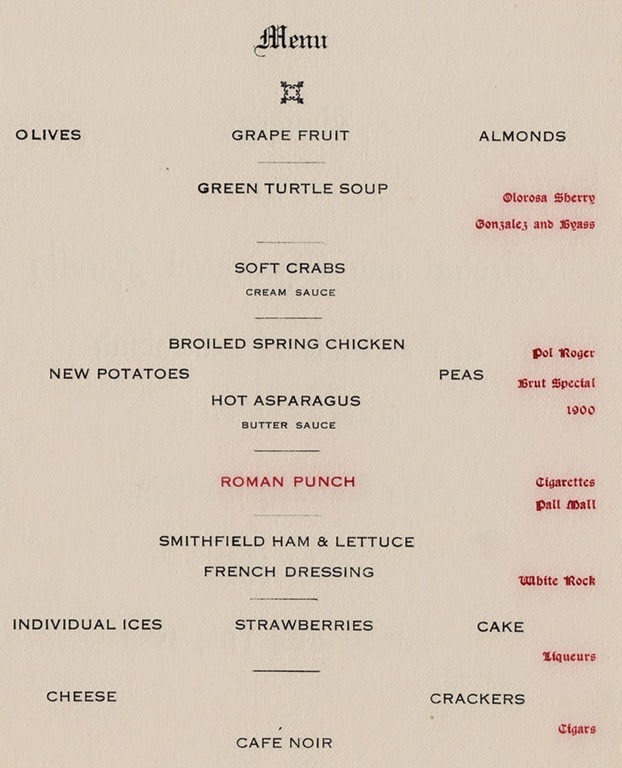 According to an article by Amanda Hesser from the New York Times, this drink was very popular in the late 1800’s and early 1900’s. It’s lemon and orange juice, with champagne and rum, topped by meringue. Here’s the general recipe:

Mix the lemonade, orange juice, Champagne and rum and chill, or freeze until slushy. Make a meringue from the egg whites and sugar. Fill a Champagne couple/saucer with the chilled punch and float a meringue island on top.

Another recipe I’ve seen calls for lemon sorbet, rum, brandy, Curaçao and champagne and is served in hollowed out oranges.

By 1922, manners expert Emily Post had declared it “unknown except at a public dinner, or in the dining-room of a parvenu.”