We have thousands of square feet of space here at MedChi HQ, and there are nooks and crannies everywhere, some of which I still have not visited. Too scary.

Every so often, someone goes exploring and finds something, and it's usually finders, keepers. Or at least keeping the find in your office. I have my own find hanging on my wall. 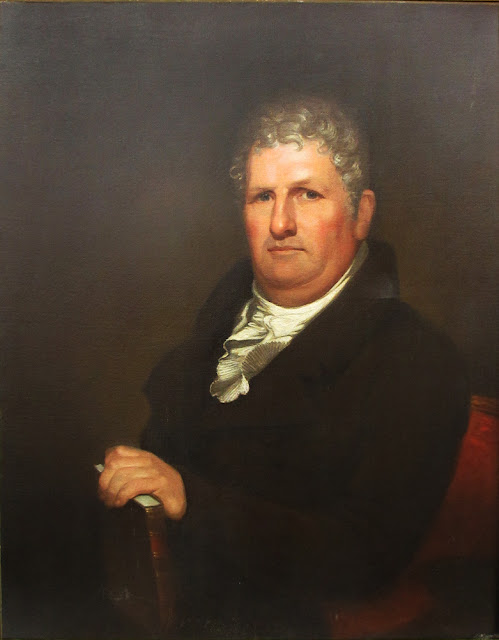 This bad boy Edward Harris, who, as far as we can tell, had nothing at all to do with medicine. But he looks like he'd be a lot of trouble fun.

Cathy, MedChi's Chief of Staff, found a bust of a man in one of the storage rooms, and had it taken to her office. He weighs about 100 lbs, and was pretty filthy. She cleaned him up a bit and put him on her wide windowsill. Fast forward to now, and our offices being painted during this quiet time. We had to move the bust, and so I decided it was the perfect time to clean him. 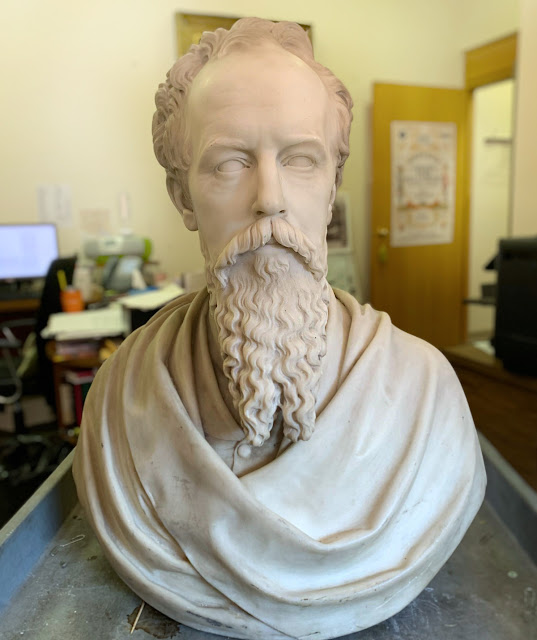 After hoicking him onto a cart, I brought him upstairs to my office and secured him, using a box of brochures to stabilize his base. In the image below, I've cleaned the back of his cloak, but haven't started on his hair. You can really see the difference a good scrub makes! 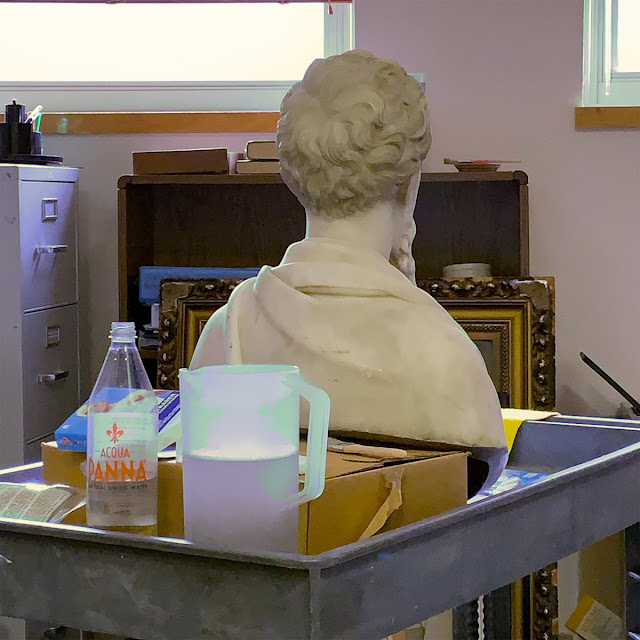 I did some research on how to clean marble and assembled the components I would need, including warm soapy water, soft cloths and Magic Erasers.

Four jugs of filthy water later, he began to regain his old good looks. But there were still the creases and folds in his cloak to take care of, so I got out the vacuum cleaner and got rid of all of the debris that had collected there. 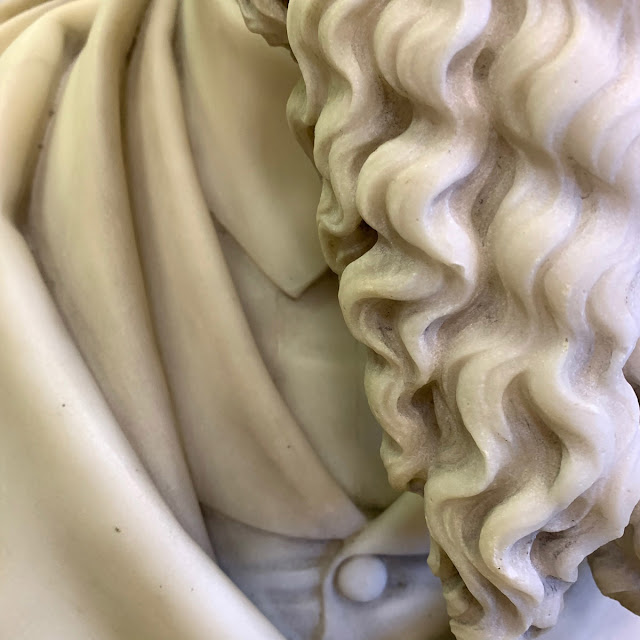 And then discovered that Magic Eraser comes in sheets, which I would use to get the dirt off the marble using chopsticks, the bowl of a plastic spoon and a mechanical pencil (with no lead) to get into the crevices. 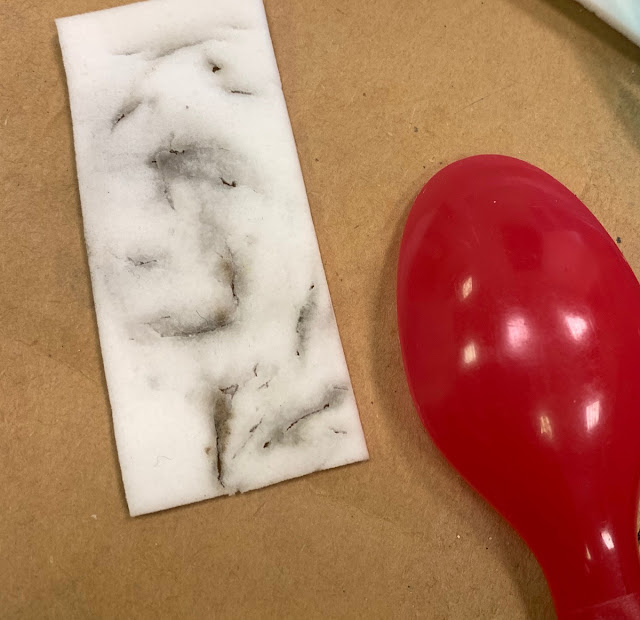 And heeding my mother's admonitions, I remembered to clean behind his ears and the back of his neck. 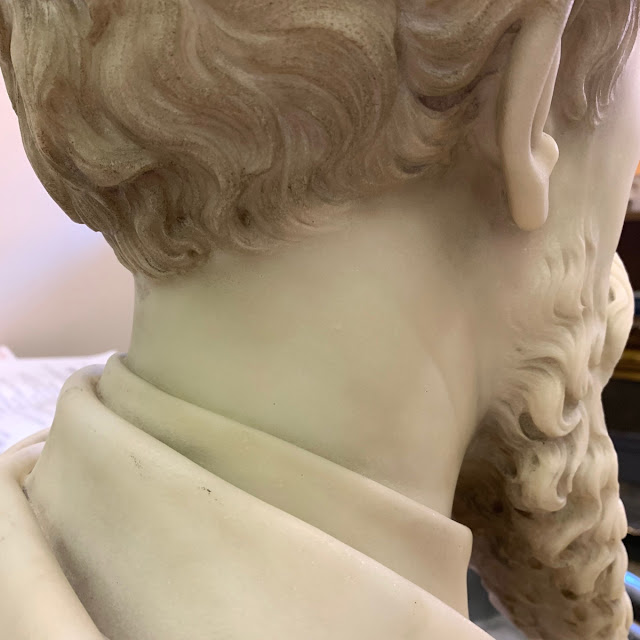 Cleaning was actually the easy part. The harder part was trying to figure out who he actually was. 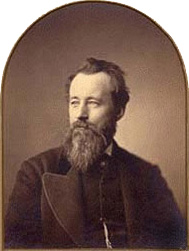 The bust was signed by W.H. Rinehart, who provided the endowment for the Rinehart School of Sculpture at MICA, our neighbor to the north. It was sculpted in Rome in 1868, as evidenced by the carvings on the base.

So armed with that information, and using the hive-mind that is Facebook, I soon found that the subject was Thomas Hepburn Buckler, whose portrait is in our collection. 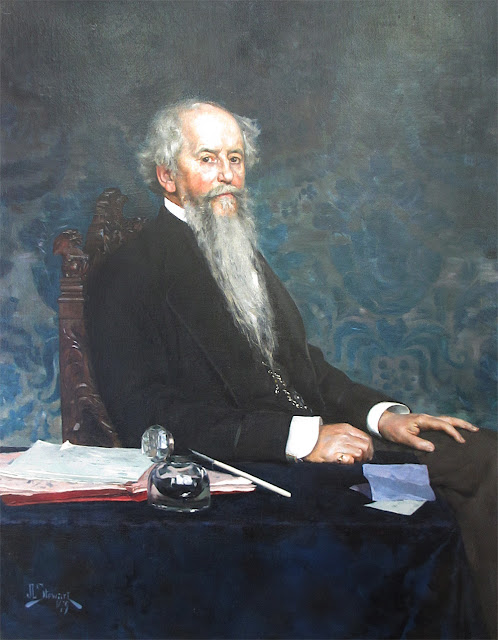 You can see similarities, especially around the hairline. The sculpture was done in 1868 when Buckler was 56, and the portrait was painted in 1879, when he was 67. 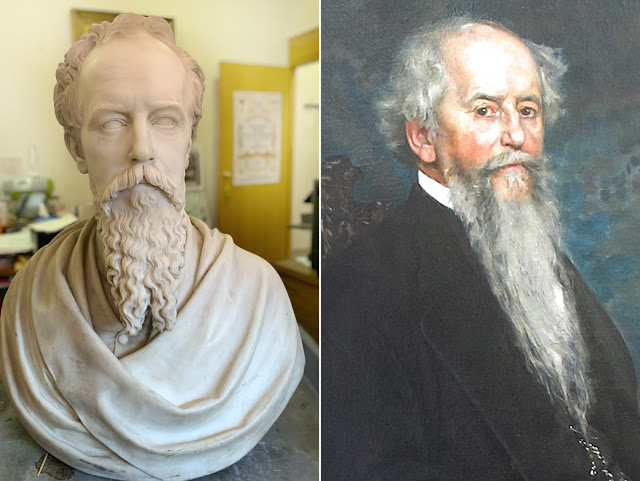 Additionally, the sculpture is listed as being in the collection of the Medical & Chirurgical Faculty in an entry in a 1958 catalogue of Rinehart's works.

Email ThisBlogThis!Share to TwitterShare to FacebookShare to Pinterest
Labels: Art